Minbar Nabawi (Pulpit of the Prophet)

The Minbar Nabawi (Arabic: منبر نبوي, Pulpit of the Prophet) refers to a multi-step golden pulpit placed in the Rawdah Riyadhul Jannah near the Mehrab Nabawi in the oldest part of the Prophet's Mosque. The original Minbar which was used by the prophet was either a wooden block or a three-tiered pulpit, but current Minbar Nabawi, was placed in the mosque by Sultan Murad ibn Saleem in the late fifteenth century and is still in use.

APA
Minbar Nabawi (Pulpit of the Prophet) (Mosque of the Prophet). (n.d.). Retrieved on January 22, 2022, from https://madainproject.com/minbar_of_the_prophet_(masjid_al_nabawi)

The present minbar of Masjid Nabawi was built and sent by Sultan Murad bin Saleem of the Ottoman empire in (997 Hj.). It is made of expensive marble with gold decorations. A dome sits on marble columns creating an elongated appearance. There are twelve steps, three which are outside the door, with nine inside. 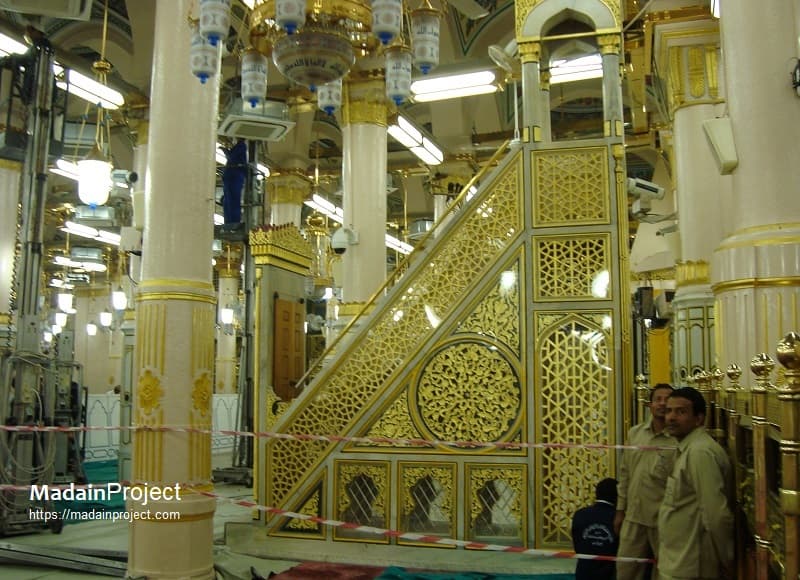 For the first eight years during the time of prophet Muhammad, he used to lean on a palm tree trunk positioned near the original mihrab [N2] during sermons. The first minbar used by prophet Muhammad was a "wood block of date tree". This was replaced by him with a tamarisk one [N3], which had a diemensions of 50 centimetres (0.50 m) x 125 centimeters (1.25 m). Also in 629 CE a three staired ladder was added to it. This minbar was replaced by Sultan Baybars I in 1395 CE, and later by Shaykh al-Mahmudi in 1417 CE.

The facade of the Minbar Nabawi has two calligraphic inscriptions, the top most is the Shahada (الشهادة‎)

meaning, There is no god but God. Muhammad is the messenger of God. And the second stanza is the dedicatory inscription for the minbar by Sultan Murad.

The lower stanza of calligraphic inscriptions comprises of four parts in three rows, which read;
(1a) Secure in the continual blessing of the lands,
(1b) And endure in the highest pinnacle of His Sovereignty,
(1c) Requesting to increase his blessings of the Hereafter,
(1d) Dispatched the Sultan Murad bin Saleem
(2a) By it guidance of the right and the truth of the heart,
(2b) The pillars of the pulpit were established,
(2c) Our lord, the Serenity of all who worship,
(2d) Around the Garden of Al-Mustafa, Peace be upon him,
(3a) Preserve the pulpit of Sultan Murad,
(3b) Said fortune inspired by its history,
(3c) Mount it enduringly, the Rightly Guided Scholars,
(3d) The pulpit raises the right guidance and exalts it. 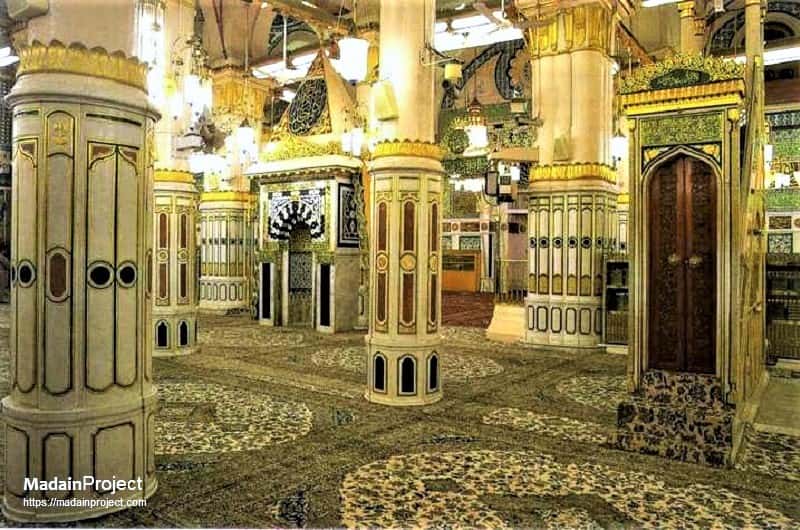 The Mibar Rasool is located in the south-western corner of the Riyad ul-Jannah, general view of the area, with Mihrab Nabawi to the far left and Minbar-i Nabawi to the right. Riad ul-Jannah is considered to be a part Jannah (Paradise). It was narrated from Abu Hurayrah that Muhammad said, "The area between my house and my minbar is one of the gardens of Paradise, and my minbar is on my cistern (hawd)."