During the caliphate of Rashidun Caliph Umer, four minarets were added to the mosque, which were used by Muazzins for Adhans. The first minarets (four in number) were 26 feet (7.9 m) high, were added in 91 Hj. After the renovation project of 1994, there were ten minarets which were 104 metres (341 ft) high. The minarets' upper, bottom and middle portion are cylindrical, octagonal and square shaped respectively. Today the mosque has ten minarets, four on the northern flank, two on the northern flank of first Saudi expansion, two minarets on the southern flank of the expansion by King Fahad ibn Abdul Aziz, and two in the extreme south. 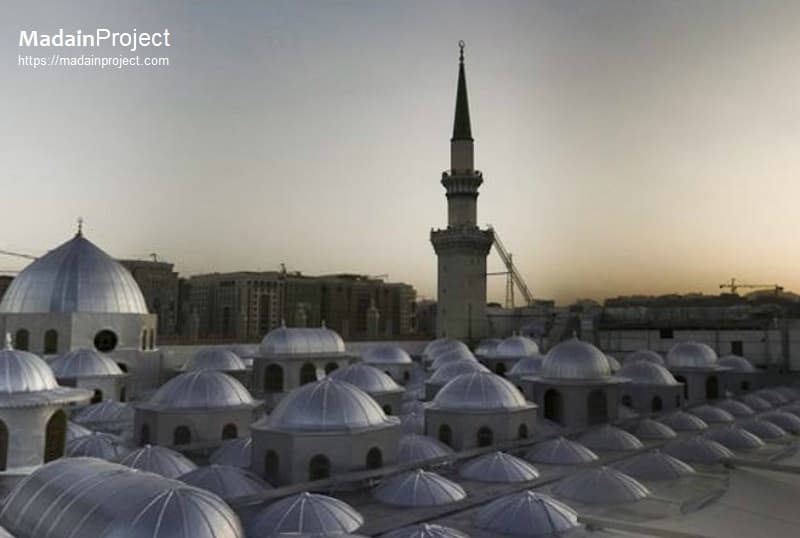 Bab al-Baqi Minaret, is located over the al-Baqi Gate, it is the closest minaret to the Green Dome (القبة الخضراء). Located on the northern edge, it is also known as the Minarah al-Rayeesa or minaret of Sultan Qaitby.

Qaytbai installed another minaret over the Bab al-Rahmah (the Mercy Gate). This minaret was demolished during the first Saudi expansion of Masjid al-Nabawi.

There are two minarets of Bab e Malik Fahad, located on the northern flank of the mosque. The minarets are two of the six tallest minarets, reaching a height of 104 meters. These minarets were added during the last Saudi explansion of Masjid al-Nabawi.