The Minaret of Isa, Madhana-i Isa (مئذنة عيسى, literally meaning the Minaret of Jesus), is one of the three minarets of the historic Great Mosque of Damascus. According to Islamic tradition it marks the spot Prophet Isa will come down (physically) before the Qiyamah (Judgement Day). Destroyed at the hands of as-Salih Ayyub while besieging as-Salih Ismail in 1245 CE. The minaret was later rebuilt with little decoration. Saladin, along with many of his successors, were buried around the Umayyad Mosque.

The Minaret of Isa to the right, reaching 253 feet (77 meters) in height, it is the tallest of the mosque’s three minarets with the Quba an-Nisr (قبة النسر) to the left. The square-shaped main body of the minaret is crowned by an octagonal spire, tapering to a point and surmounted by a crescent.

Some sources claim it was originally built by the Abbasids in the 9th century, while other sources attribute the original structure to the Umayyads. 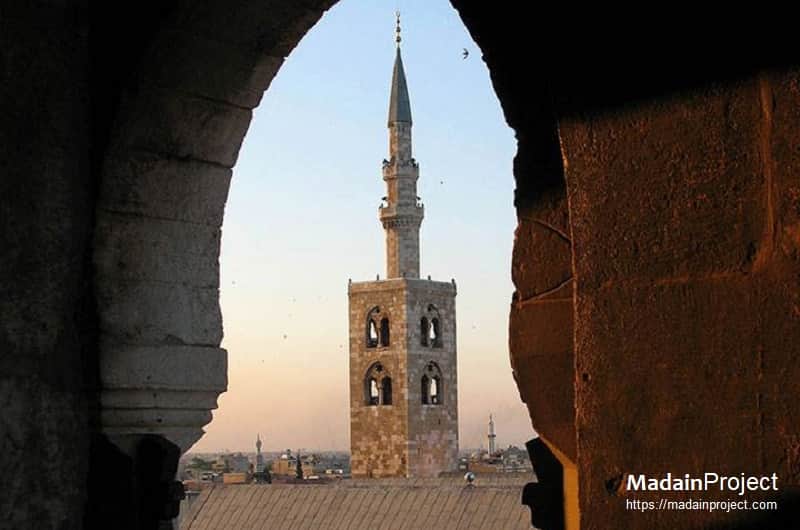 A Mueddin chanting the call to prayer from a gallery of the Minaret of 'Isa (Jesus). This minaret (on the summit of which Moslem tradition says that Jesus will appear on the Judgement Day) is at the south-east corner of the Great Mosque, Damascus, and is two hundred and fifty feet in height. The beautiful octagonal minaret at the south-west corner is called El Gharbîyeh. A third minaret, not shown in this illustration, is called El 'Arûs (the Bride).

Islamic belief holds that Jesus will descend from heaven before the Day of Judgement to confront the Antichrist. According to local Damascene tradition, he will reach earth via the Minaret of Jesus, hence its name. Ibn Kathir, a prominent 14th-century Muslim scholar, backed this notion. It is believed that he will descend on a Jamaat (group) that will be righteous at the time and comprising of 800 men and 400 women. The people will be preparing for war at the time against Dajjal. It will be time for Fajr prayers, and Imam Mahdi will be the Amir (leader) of the Muslims.

The tradition of prophet Isa (Jesus) descending from heavens is found in a number of Ahadith, and some even mention "the minaret" as well. According to abi Dawud (Hadith 4321), prophet Muhammad said that Isa ibn Maryam will descend from heavens towards the white minaret east of Damascus. Another Hadith from Ibn Majjah relates the same account of 'Isa ibn Maryam's descent on a white minaret east of Damascus.

The Madhana 'Isa is one of three minarets of Jameh Umavi, with the tomb of Salah al-Din Ayubi in the bottom-center. In Islamic eschatology the descent of Isa as a prelude of the Judegement day is considered a very important sign. A number of Ahadith mention that the "...Hour will not be established (qiyamah will not occur) until and unless Isa ibn Maryam descends east of Damascus on a group of people..."