The Migdal Synagogue is an ancient synagogue, located in Israel on the shore of the Sea of Galilee part of the archaeolgy site of acient Magdala. The synagogue was in use in the Second Temple period (50 BCE-100 CE), one of several found to date from that period and includes a carved stone representing the menorah.

The synagogue covers approximately 120 square metres (1,300 sq ft). As in other ancient synagogues, it has stone benches built against the walls. The walls were decorated with elaborately designed and colored frescos and the floor is partially made of mosaics.

The historic synagogue was discovered in 2009 during a salvage dig conducted by Dr. Dina Avshalom-Gorni of the Israel Antiquities Authority at the location of a new hotel at Migdal Beach, the site of ancient Magdala.

Magdala was a fishing town that was mentioned in Jewish documents of the period as a major site during the First Jewish–Roman War (66–73 CE) at the time of the destruction of the Second Temple in 70 CE and is also mentioned in Christian texts as the home community of Mary Magdalene.

Artist's conception of the first century synagogue at Magdala, looking across the street through the entrance. In the square main hall there are two rows of basalt benches, an outer row against the walls and an inner one at a lower level. The Migdal site is just one of seven synagogues known to date back to the Second Temple period, with the relative scarcity of such houses of worship explained by the prevailing religious practice of making pilgrimages to the Temple in Jerusalem.

Migdal Stone
The Migdal Stone found at the site, is notable for having the earliest known images of the Temple Menorah to be found in a synagogue. The facade features an arch supported by a pair of pillars. Within the arch a seven-branched menorah sits atop what appears to be a pedestal. According to Kershner, the original has been removed for safekeeping; a replica is displayed in the ancient synagogue at Migdal.

Frescoes
The remains of the wall frescos (a), along the bottom of the southern wall of the antechamber and its mosaic is believed to be earlier than that of the main hall,. Just as in the case of synagogue the frescoes do not include any figure motif but contain only geometric and marble-imitation painting. This room may have been used to store the sacred scrolls. 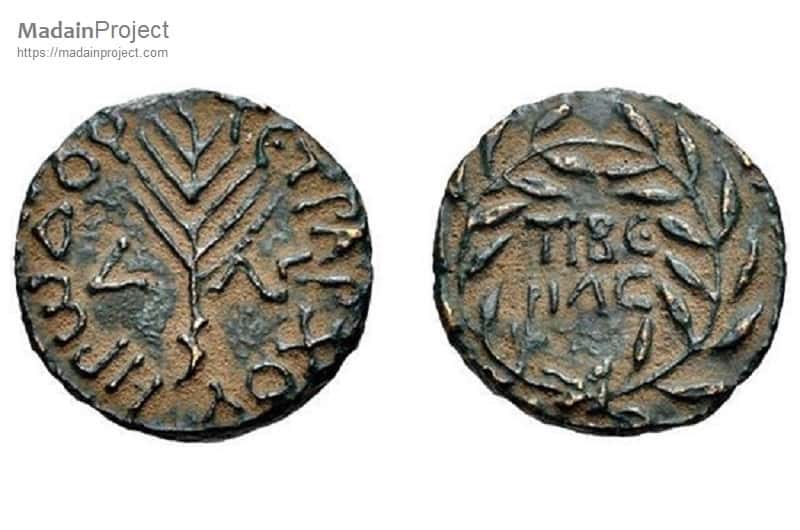 Coin of Herod Antipas
The coin of Herod found at the site, inside the antechamber, of the synagogue, bears the date 29 CE a year before what according to Christian tradition to have been the date of Jesus' crucifixion. It had the names "Tiberius" and "Herodias Tetrarch," namely Herod Antipas, best known to us for imprisoning and beheading the Baptist. It is very likely that the mosaic of this floor was laid before the coin fell, though of course the coin may have fallen some years after its minting.