The Mausoleum of Saladin (ضريح صلاح الدين الأيوبي) holds the resting place and grave of the medieval Muslim Ayyubid Sultan Salah ul-Din Ayyubi. It is adjacent to the Umayyad Mosque in Damascus, Syria. It was built in 1195, three years after the death of Saladin. al-Malik al-Afdal Nur al-Din 'Ali, ruler of Damascus, completed the construction of the mausoleum.

Since the Middle Ages, Saladin has been one of the most influential figures of historical memory in Eurasia. The Mausoleum of the great sultan is relatively small, and stands in a garden on the north side of the Masjid Umawi al-Kabir. The mausoleum was built in 1196 CE, three years after the death of Saladin by his son, al-Adil I. It was once part of the al-Aziziyah madrasa, but nothing remains of the school.

Death and Burial of Saladin

Salah al-Din (صلاح الدين) died of a fever in March of 1193. He was temporarily buried in the Damascus Citadel (قلعة دمشق) while his mausoleum was being constructed. The surrounding religious school, of which only several columns and an interior arch still stand, was constructed shortly after the mausoleum under al-Aziz Othman Bin Salah al-Din. 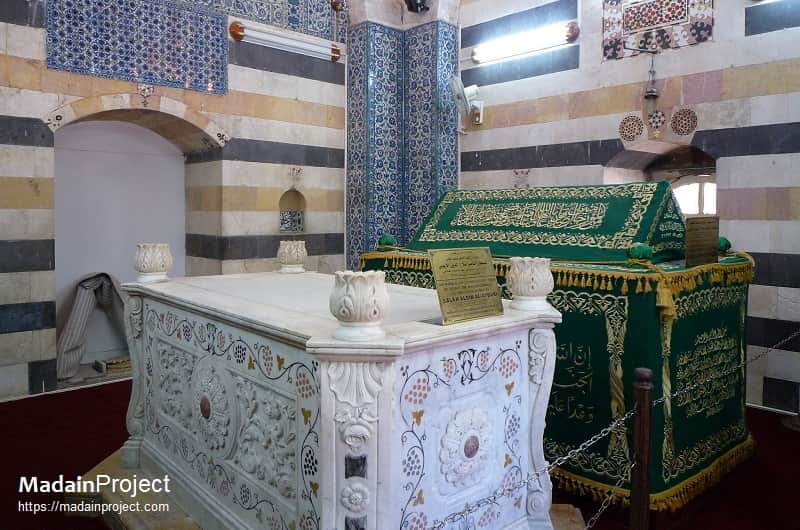 Shrine Interior and Cenotaphs
The Tomb of Salah al-Din (قبر صلاح الدين) is fairly modest, a square chamber featuring ablaq walls with four arches supporting the dome (inspect). The mausoleum presently houses two sarcophagi: one made of wood covered with shroud (inspect), said to contain Saladin's remains, and one made of marble, donated by Kaiser Wilhelm II. The interior of the Mausoleum is small and elegant in its simplicity. The room is adorned with pictures, tributes and the like. The tomb of Saladin itself, shrouded in gold-trimmed cloth, dominates the center of the chamber.

Bronze Wreath of Kaiser Wilhelm II
Ornate gilt bronze wreath, gifted by Kaiser Wilhelm II. At the end of the First World War this wreath was removed from the tomb of Saladin. It was apparently presented to Colonel T E Lawrence ('Lawrence of Arabia') by Sherif Feisal, leader of the Arab movement, when they entered Damascus on 1 October 1918. Lawrence, in turn, presented the wreath to the Imperial War Museum on 11 November 1918. In his original deposit note, he claims to have removed the wreath himself: 'as Saladin no longer required it.'