The Masjid al-Qiblatayn (مَسْجِد ٱلْقِبْلَتَیْن‎), 'Mosque of the Two Qiblas', is a mosque in Medina that is historically important for Muslims as the place where, after prophet Muhammad received the command to change the Qiblah (Direction of Prayer) from Jerusalem to Mecca, the entire congregation led by a companion changed direction in prayer. The name of the mosque goes back to the lifetime of Muhammad, when his companions named it after an event that took place.

The Qiblatayn Mosque is among the earliest mosques that date to the time of Muhammad, along with the Quba Mosque, Prophet's Mosque and possible the Masjid as-Sahaba, considering that the Great Mosques of Mecca and Jerusalem are associated with earlier Prophets in Islamic thought. Most recently it was renovated, circa 1988 CE, during the reign of Malik Fahad bin 'Abdulaziz al-Sa'ud.

Tradition of the Change of the Qibla

Prophet Muhammad received revelation from Allah instructing him to take the Kaaba as the Qibla in the early morning hours of the day, instead of the Qibla of the Jews, that is the Temple Mount in the Shaami city of Jerusalem. He announced this to his companions in his own mosque, after which the news began to spread. A companion who heard this went to Masjid al-Qiblatayn to share this news. Upon arriving, he noticed the congregation were already engaged in the afternoon prayer.

He called out from the back of the mosque that the change of direction has been ordained, and upon hearing this, the imam (leader of the prayer) immediately turned around to face Mecca, and those praying behind him also did so. Another tradition recounts that it was the prophet himself who was leading the prayer, and the revelation came during the Salah. There's another mosque in Zeila, Somali which is also known as the Masjid al-Qiblatayn. 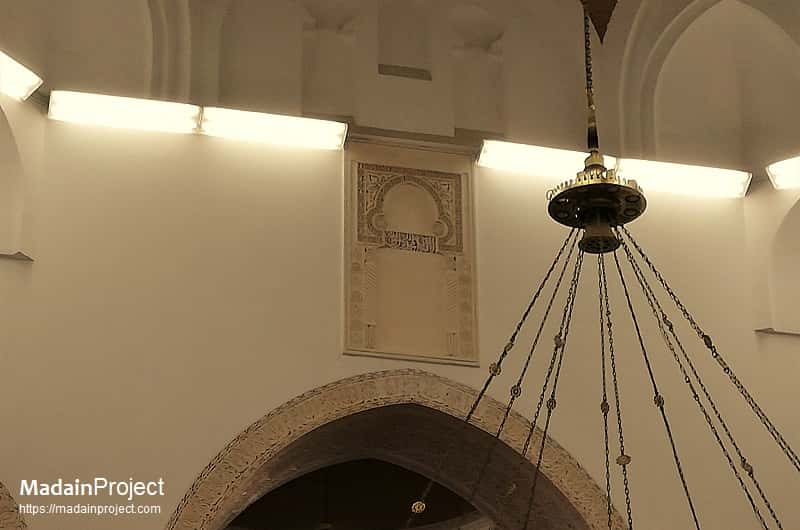 Mihrab al-Quds
Before the most recent renovation the Qiblatain Mosque uniquely contained two Mihrabs (Prayer niches), one facing Mecca and one facing Jerusalem, hence the name "Mosque of the two Qiblas". During modern renovations the Mehrab facing Mecca was left but the Mehrab facing al-Quds (Jerusalem) was removed and a small marker mihrab was installed overhead. It is located below a false dome which is linked to the first by a small cross-vault to symbolise the transition from one qibla to another. The design is a reproduction of the mihrab Suleimani (inspect) found in the lower chamber of the Qubbat al-Sakhara in Jerusalem reminds onlookers of the oldest extant mihrab of Islam. 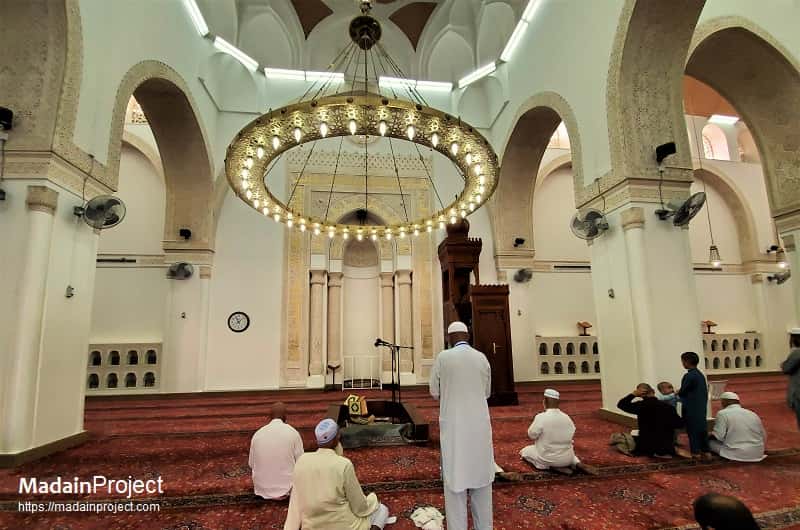 Main Prayer Hall
The main prayer hall adopts rigid orthogonal geometry and symmetry which is accentuated by the use of twin minarets and twin domes. The prayer hall consists of a series of arches which support barrel-vaults running parallel to the qibla wall. These vaults are interrupted by two domes which establish an axis in the direction of Mecca. The main dome to the south is raised on a drum of clerestory windows (inspect) which allow light to filter into the interior directly above the mihrab. 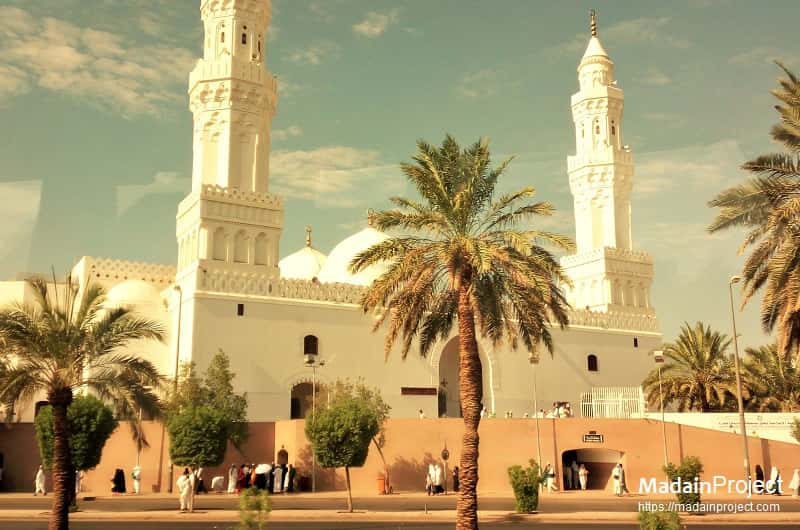 Exterior
Externally, the architectural vocabulary is inspired by traditional elements and motifs in a deliberate effort to offer an authentic image for an historic site. The mosque is located on the north-west of the city of Medina, on Khalid bin al-Waleed road. The mosque was initially maintained by Caliph Umar ibn al-Khattāb. By the rise of the Ottoman Empire the mosque was maintained by Sultan Suleiman the Magnificent who renovated and reconstructed it.

Underground Facilities
Entry to the prayer hall is from the raised courtyard, also to the north, which can be reached by stairs and ramps from the main directions of approach. A sub-basement level is incorporated in the southeast corner of the mosque, which serves as the ablutions area for worshippers. 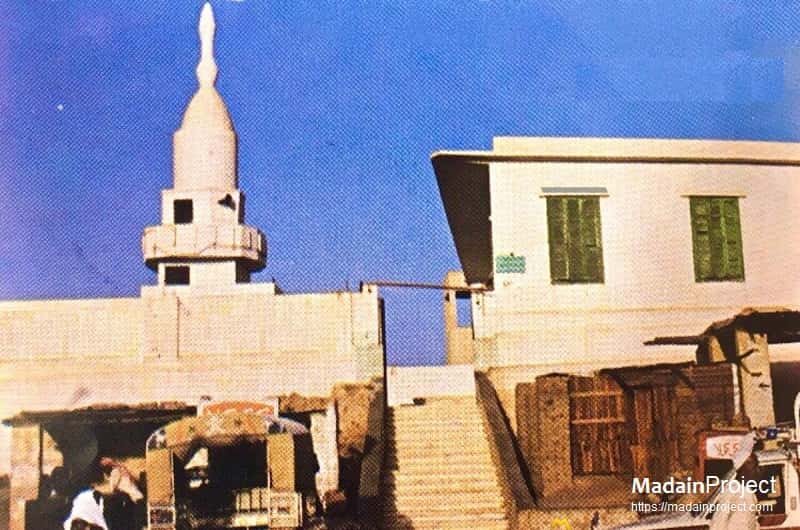 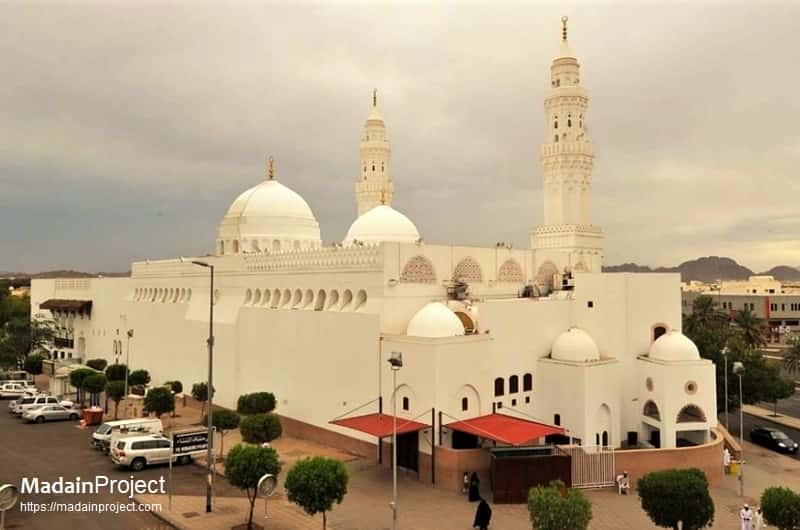 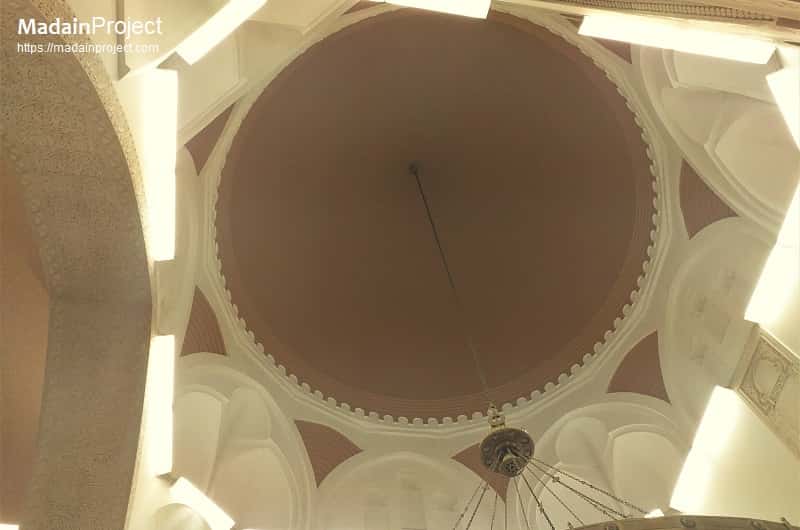