The mammisi (birth house) at Philae, located in the inner courtyard of the Temple of Isis, was a small temple of very specific and unique function.

The Mammisi (birth-house) at Philae is surrounded on three sides by a colonnade of floral topped columns each crowned with a sistrum and Hathor-headed capital. The Mammisi (birth house) was a common feature of Ptolemaic temples and the example on Philae is similar in layout and decoration to examples at Dendera and Edfu. The mammisi from Philae served as a model for developing a typical birth house plan with pronaos and surrounding ambulatory.

It is among the best preserved monuments of its kind thanks to the salvage effort accompanying the building of the Aswan dams in the 1960s, when it was moved to the nearby island Agilkia.

It was the first Ptolemaic birth house erected beside the temple of Isis on the island of Philae during the reign of Ptolemy II Philadelphus and Ptolemy III Euergetes and was dedicated to the young Horus. Unlike other mammisis, it was (and still is) situated in a courtyard between the first and the second pylon on the parallel axis to the main temple, possibly because of the very limited space on the island.

The interior plan (inspect) was simple: three chambers, each sequentially bigger than the previous one. The last one served as a sanctuary consecrated to the infant Horus. The central building was surrounded by a corridor along three sides, enclosed by a colonnade (three columns in the rear portico and seven in each lateral one) with L-shaped pillars in the northern corners. All of them were connected by screen walls.

Regarding the decoration of the colonnade, the facade columns were topped by composite capitals with three rows of lily flowers. Above the capitals were high abaci decorated on each side with the face of the goddess Hathor with a very short sistrum over her head. The gate and screen walls were framed by a torus moulding and a cavetto cornice. The side porticos were quite diverse as almost every capital was different.

The decoration of the birth house on Philae was initiated in the reign of Ptolemy III, most of work was completed in the times of Ptolemy VIII and continued by Ptolemy XII and in Roman times, it was never finished however. 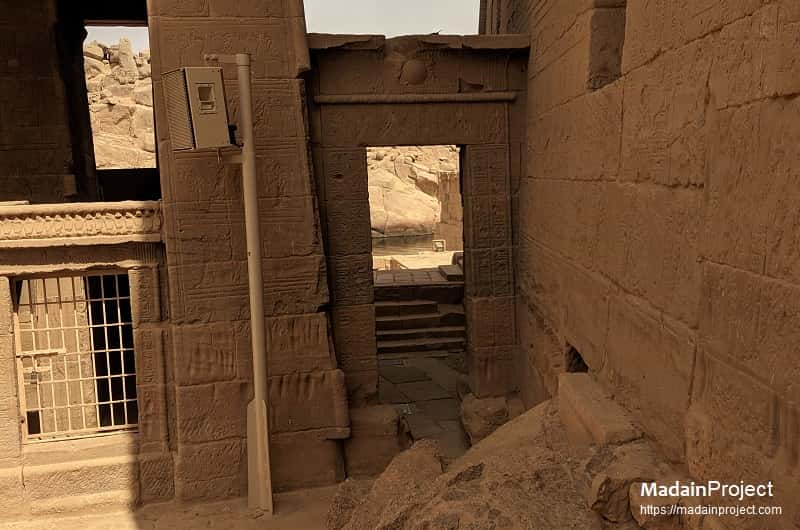 The architrave on the east side was extended up to the wall of the second pylon, creating a passageway behind the birth house.