The Lithostrotos (Roman Paving) under the Convent is considered to be where Jesus suffered at the hands of the Roman soldiers, and where the trial by Pontius Pilate took place. But it is more likely that Pilate judged Jesus at Herod the Great‘s palace, on the site of the modern Citadel inside the Jaffa Gate. It is also known as the Gabbatha (Aramaic גבתא), the Aramaic name of a place in Jerusalem. The term Lithostrōtos occurs in the Bible only once, in John 19:13. It states that Pontius Pilate: ..."brought Jesus forth, and sat down in the judgment seat, in the place that is called Lithostrotos, and in Hebrew Gabbatha". 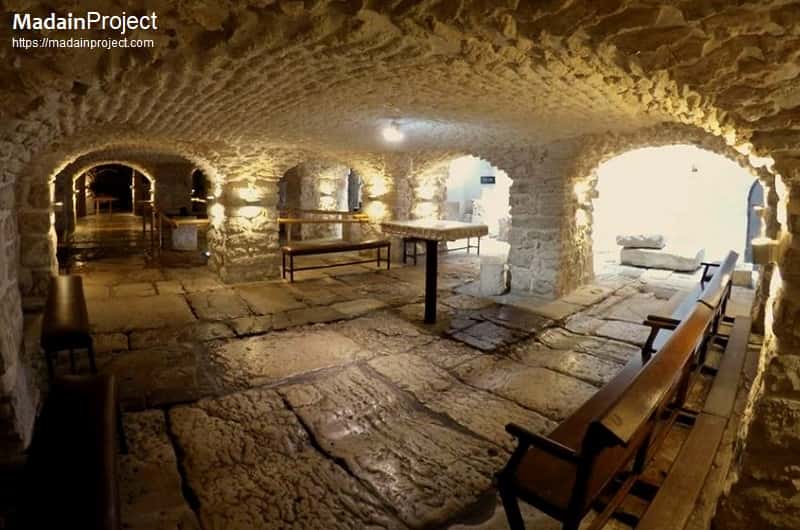 A painting by James Tissot (inspect), circa 1890 CE, depicts an artistic impression of the biblical description of the site. The plaza is made of large flagstones that were specially etched to prevent horses from slipping. The Church of Ecce Homo is located above the Lithostrotos and the Struthion Pool is situated underneath it. In the past, the presence of the soldiers’ games added weight to the mistaken assumption that this was the location where Jesus appeared before Pilate, was flogged, mocked as “King of the Jews” and crowned with thorns.

The remains of the Hadrian's Arch (northern smaller arch), now known as the Ecce Homo Arch, inside the Ecce Homo Basilica. This arch was built over the large plaza built by Hadrian circa 130 CE, as an entrance to the eastern Forum of Aelia Capitolina; the site of the forum was previously a large open-air pool of water (the Strouthion Pool).

Some archaeologists believe the arch stood on this great plaza constructed by the emperor Hadrian when he rebuilt the city in 135 CE — a century after Jesus. Some consider it was originally a city gate from the time of Herod Agrippa I (41-44 CE). Large sections of the plaza remain underneath the Via Dolorosa and adjacent buildings, accessible through the Ecce Homo convent of the Sisters of Zion.

At the start of the 20th century, the French religious-archaeologist Father Louis-Hugues Vincent discovered a large expanse of ancient pavement immediately beneath the Convent of the Sisters of Zion. He declared that it was the “lithostrotos” of John’s gospel (the location of Pontius Pilate’s judgment of Jesus). Archaeology has proven conclusively that the pavement was associated with the arch and was part of the Hadrianic forum.

Kings' Game was played with sheep’s knuckles as dice and they would roll those dice on a playing board. The soldiers would pick one of their own and make him the “king”, give him robe, crown etc. During the course of the day the soldiers would gamble for all of his possessions – clothes, wife, home back in Rome, etc, culminating in gambling for who got to kill him. The game was outlawed, probably during the reformations made by Caesar Augustus.

Archaeological studies have confirmed that the Roman pavement at these two traditional stations was built by Hadrian in the 2nd century CE as the flooring of the eastern forum of Aelia Capitolina. Prior to Hadrian's changes, the area had been a large open-air pool of water, the Struthion Pool mentioned by Josephus. The pool still survives under vaulting added by Hadrian so that the forum could be built over it, and can be accessed from the portion of Roman paving under the Convent of the Sisters of Zion, and from the Western Wall Tunnel.

This site of the Hadrianic forum had previously been a large open-air pool of water called the Struthion Pool (sparrow pool). It was built in 1st century BCE next to the Antonia Fortress, a military barracks built around 19 BCE by Herod the Great. The Herodian pool was laying in the path of the northern decumanus, so Hadrian added arch vaulting to enable the pavement to be placed over it. The pool is located at the northwestern corner of Jerusalem's Temple Mount. It is a two chambered pool, the second chamber leads in to the Western Wall Tunnel.

Entrance to the Church of Ecce Home is to the left under the Arch of Ecce Homo (Hadrian's Arch), the portal after the two barred windows. The entrance to the Roman era pavement is to the right (the small gate). The Lithostrotos exhibition includes, visual and auditory information units, Struthion Pool, museum, northern gallery, lithostrotos, eastern gallery, and prayer chapel.