The Kidron Valley (وادي الجوز), Wadi al-Joz, is the valley on the eastern side of The Old City of Jerusalem, separating the Temple Mount (Haram al-Sharif) from the Mount of Olives. It starts north of the Old City of Jerusalem and continues east through the Judean Desert, towards the Dead Sea, descending 4000 feet along its 20 mile course.

Kidron Valley as seen from the old city of Jerusalem, looking south with Area G excavations to the right. The modern name Kidron Valley applies to the the entire length of this long wadi, while the biblical names Nahal Kidron, Emek Yehoshafat (Valley of Josaphat), King’s Valley etc. might refer to certain parts of this valley located in the immediate vicinity of ancient Jerusalem, but not to the entire wadi.

In its upper part, the neighborhood of Wadi al-Joz bears the valley's Arabic name. 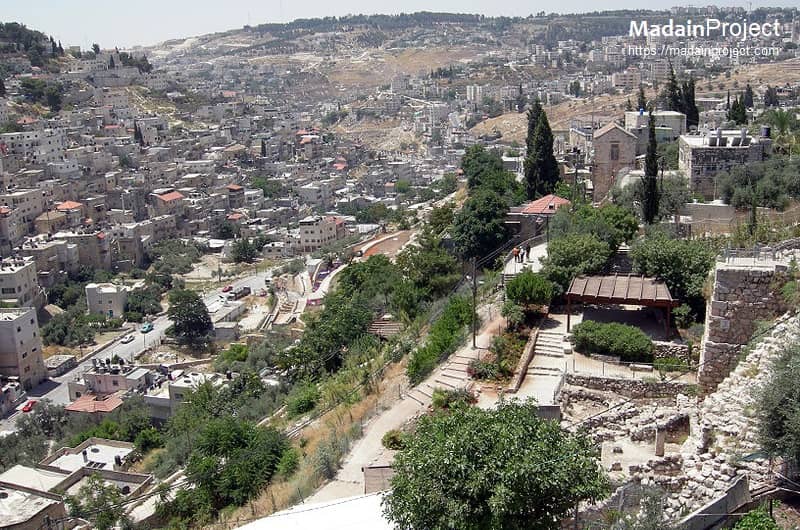 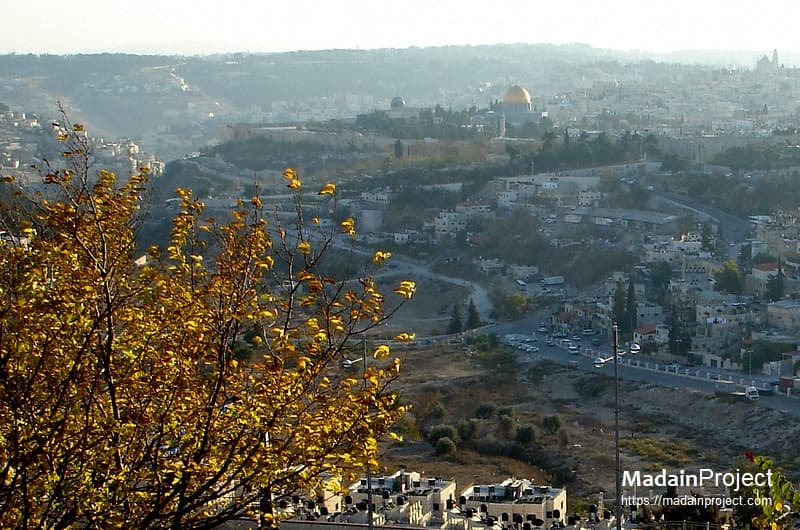 Looking across the Kidron valley from Mount of Olives towards the old city of Jerusalem, with Dome of Rock and al-Aqsa on Haram al-Sharif (Temple Mount) visible in far background. According to an Islamic tradition this is location where one end of as-Sirat bridge will be hung. The upper Kidron Valley holds Jerusalem's most important cemetery from the First Temple period, the Silwan necropolis, assumed to have been used by the highest-ranking officials residing in the city, with rock-cut tombs dating between the 9th and 7th centuries BCE. 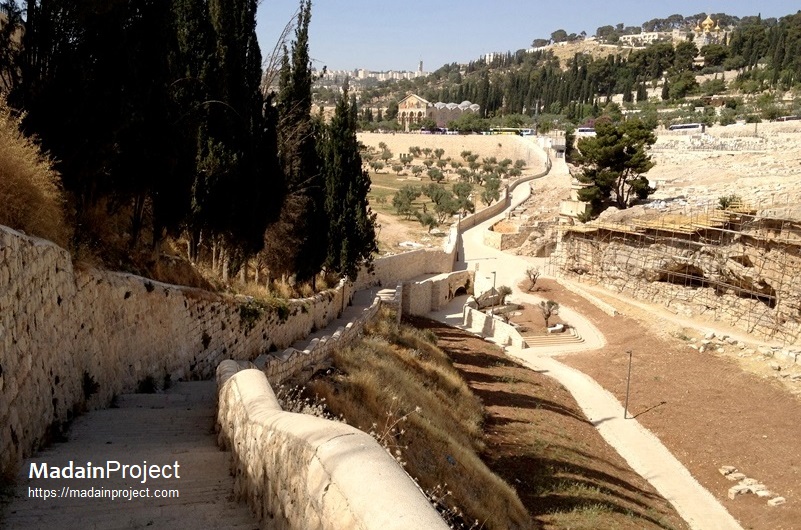 Steps leading down from old city of Jerusalem into Kidron Valley, the Absalom's Pillar is on the right behind the tree, Basilica of Agony (center) and the golden domes of the Church of Mary Magdalene (top right) are also visible. The upper Kidron Valley segment north of the Old City was one of the main burial grounds of Jerusalem in the Second Temple period, where hundreds of tombs have survived until today, while the segment east of, and opposite the Temple Mount, boasts several excellently preserved monumental tombs from the same period. 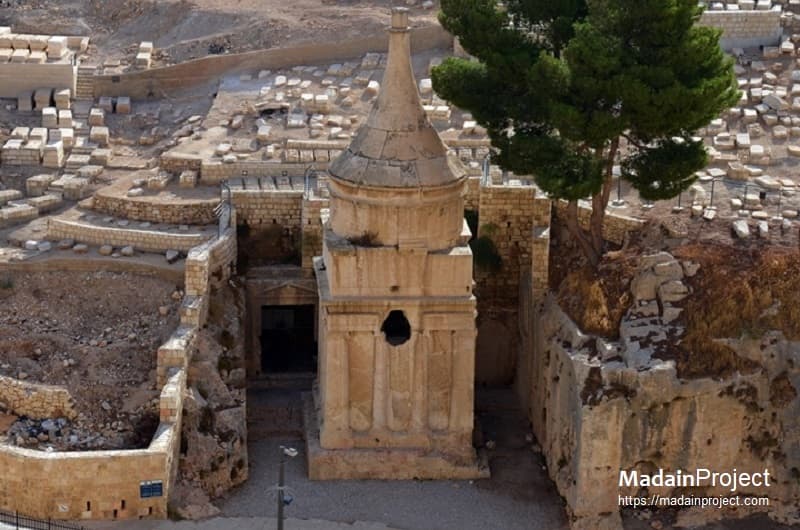 Absalom's Tomb
Tomb of Absalom (Yad Avsalom) in the Kidron Valley at the foot of Mount of Olives with entrance to the Cave of King Jehoshaphat (Maarat Yehoshafat) visible in the background to the left. Absalom's Pillar, a tomb in itself, also served as a funeral monument to the burial cave system located behind it, the "Cave of Jehoshaphat". The tomb is not only a burial structure in its own right, with its upper part serving as a nefesh or funeral monument for the tomb in its lower part, but it was probably also meant as a nefesh for the adjacent burial cave system known as the Cave or Tomb of Jehoshaphat, with which it forms one entity, built at the same time and following a single plan. 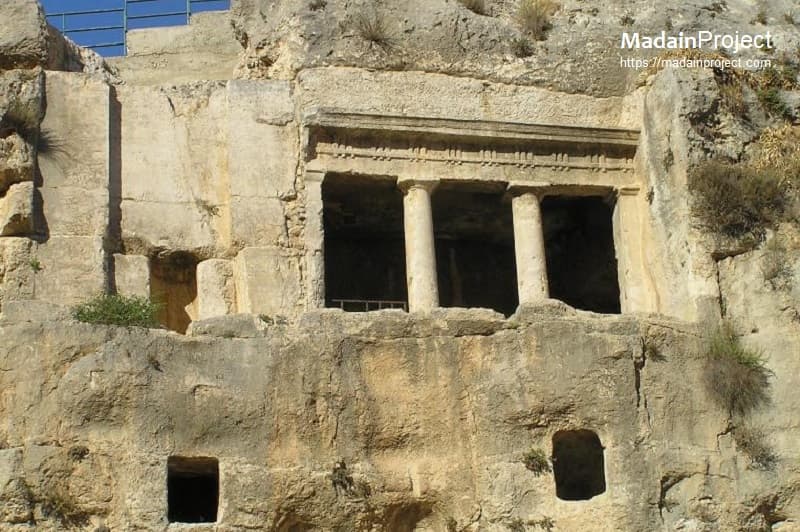 Benei Hezir Tomb
Tomb of Benei Hezir, (Bnei Hezir), is the oldest of four monumental rock-cut tombs that stand in the Kidron Valley. The tomb is effectively a burial cave dug into the cliff. It features a Hebrew inscription which makes it clear that this was the burial site of a Cohanim family by the name of Bnei Hazir. It has been suggested that the adjacent tomb of Zechariah is actually a Nefesh for this tomb. The tomb's architectural style is influenced by ancient Greek architecture (two pillars with Doric capitals) as well as Nabataean influence in architecture and decorative elements. 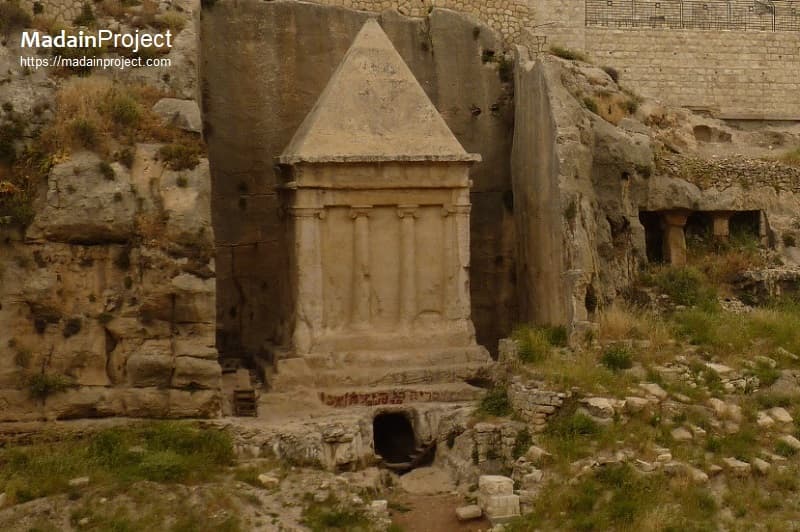 Zechariah's Tomb
Tomb of Zechariah in the Kidron Valley at the foot of Mount of Olives. The Tomb of Zechariah is an ancient stone monument adjacent to the Tomb of Benei Hezir that is considered in Jewish tradition to be the tomb of Zechariah ben Jehoiada. The monument is a monolith, completely carved out of the solid rock and does not contain a burial chamber. The lowest part of the monument is a crepidoma, a base made of three steps. Above it there is a stylobate, upon which there is a decoration of two ionic columns between two half ionic columns and at the corners there are two pilasters. 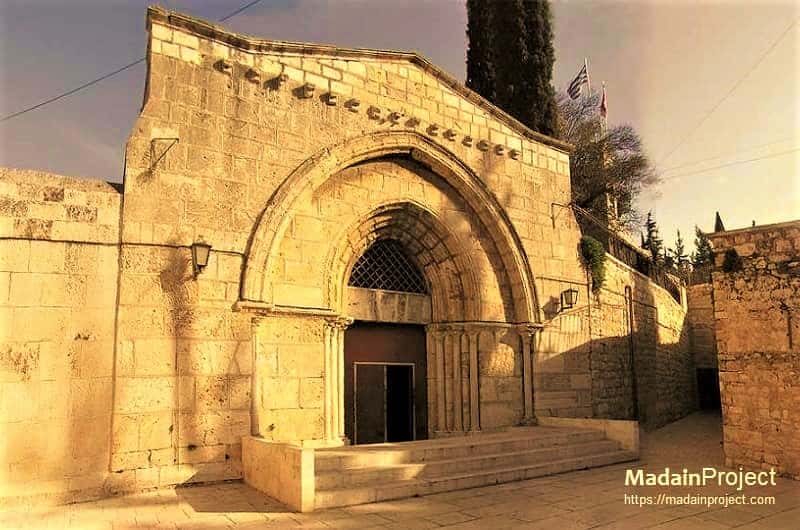 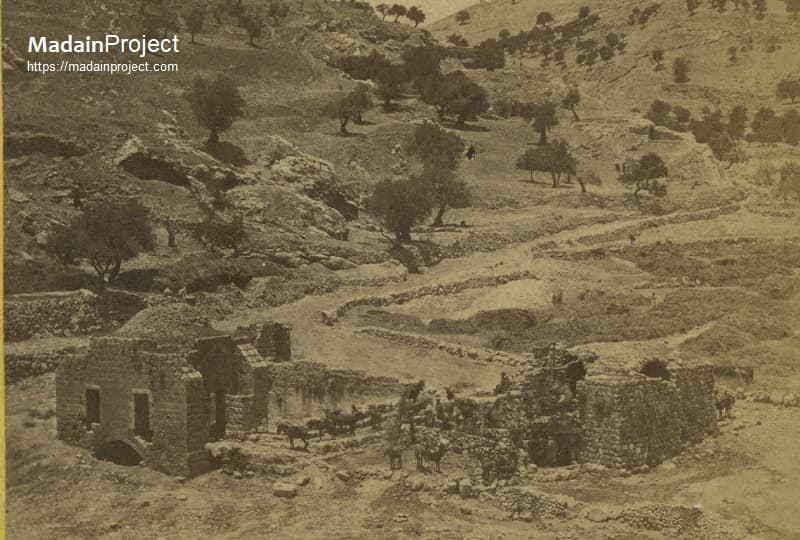 Ein Rogel
The Ein Rogel, also identified with Nehemiah's well (pictured here), was a spring on the outskirts of Jerusalem mentioned in the Hebrew Bible as the hiding-place of David's spies, Jonathan and Ahimaaz during Absalom's uprising against the role of King David (2 Samuel 17:17). It may also have been a sacred place in pre-Israelite times. Ein Rogel was one of the boundry marks between Judah and Benjamin (Joshua 15:7, 18:16). Ein Rogel lay close to a stone Zoheleth where Adonijah held a sacrificial feast when he attempted to assert his claims to the throne (1 Kings 1:9). The obviously sacred character of the spring suggests that it is the same as the Dragon Well or Serpent Well of Nehemiah 2:13. 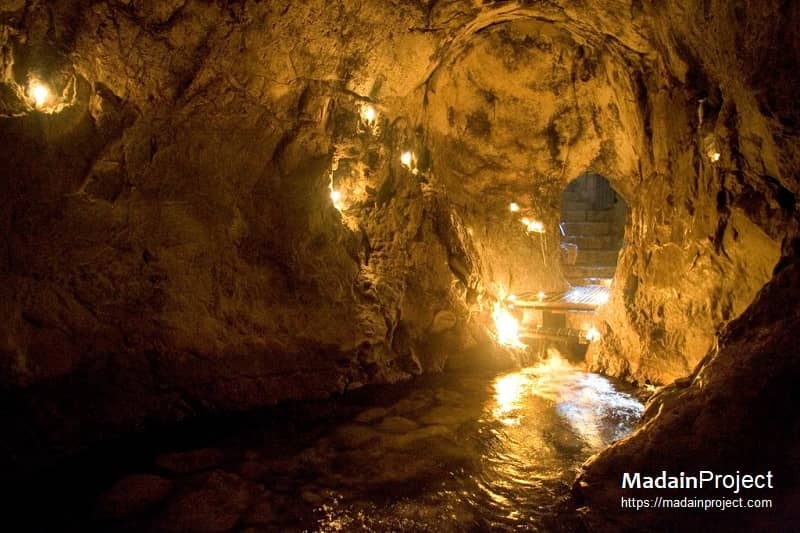 Gihon Spring Gihon Spring or Fountain of the Virgin in the Kidron Valley was the main source of water for the Pool of Siloam in the City of David, the original site of Jerusalem. One of the world's major intermittent springs—and a reliable water source that made human settlement possible in ancient Jerusalem—the spring was not only used for drinking water, but also initially for irrigation of gardens in the adjacent Kidron Valley which provided a food source for the ancient settlement. 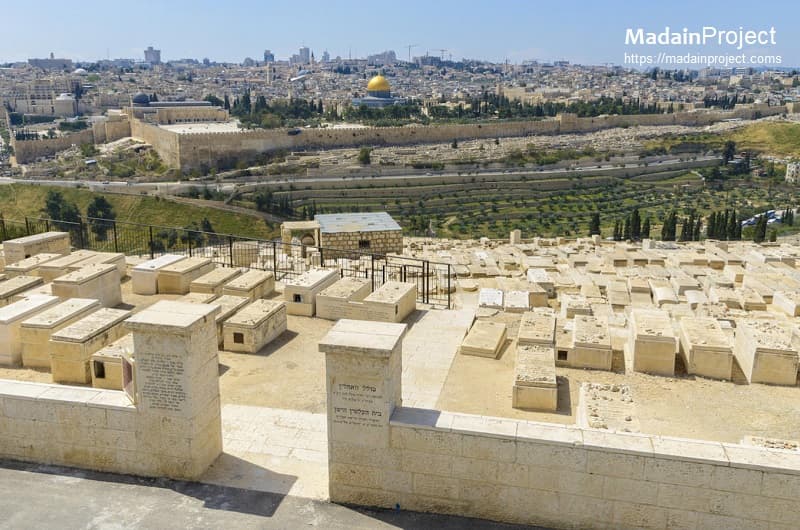 Mount of Olives Cemetery
View of the Jewish Cemetery with tombs of Absalom, Benei Hazir and Zachariah at the bottom. The Jewish Cemetery on the Mount of Olives, including the Silwan necropolis, is the most ancient and most important cemetery in Jerusalem. The cemetery contains anywhere between 70,000 and 2 or 300,000 tombs from various periods, including the tombs of famous figures in Jewish history. During the First and Second Temple Periods the Jews of Jerusalem were buried in burial caves scattered on the slopes of the Mount, and from the 16th century the cemetery began to take its present shape. 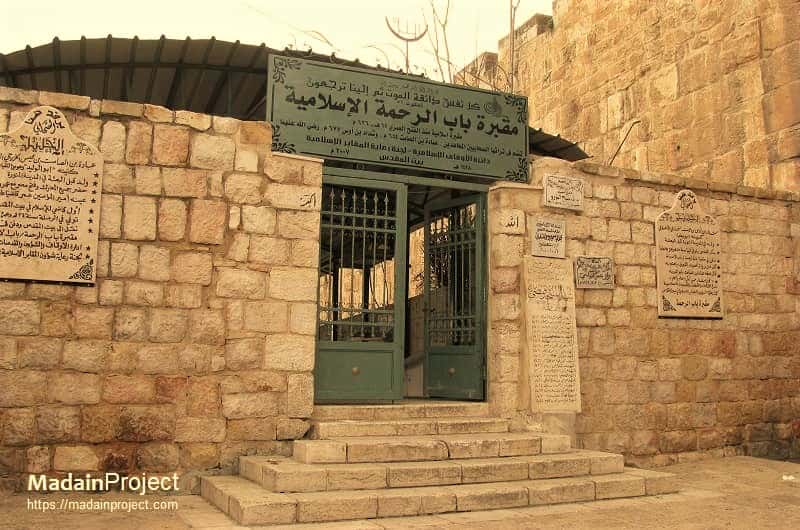 Bab alrahmah Cemetery
Bab al-Rahamh Cemetery is a historic Muslim cemetery along the eastern wall of Haram al-Sharif (Temple Mount) in Jerusalem, dating back to the middle of seventh century CE. Three of Muhammad's companions Obada Bin Al-Samet, Shadad Bin Aous Al-Ansari, and Thabet Thou al-Asabe’ al-Tamimi are believed to be buried here. This choice of burial grounds probably reflects theological beliefs concerning the last judgment and resurrection connected to the Mount of Olives and the Asihara area (north of Herod's Gate). 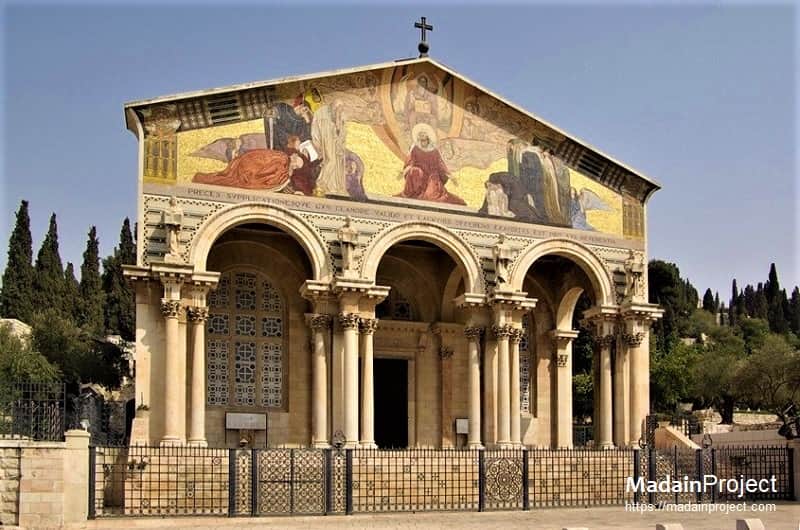 Church of All Nations
The Church of All Nations, also known as the Church or Basilica of the Agony, is a Roman Catholic church located on the Mount of Olives in Jerusalem, next to the Garden of Gethsemane. It enshrines a section of bedrock where Jesus is said to have prayed before his arrest. The facade of the church is supported by a row of Corinthian columns. Atop each column sits statues of the Four Evangelists. First is Mark. Second, Luke holds a quote from Luke 22:43-44. Followed by Matthew holding Matthew 26:42b. The final statue is of John. 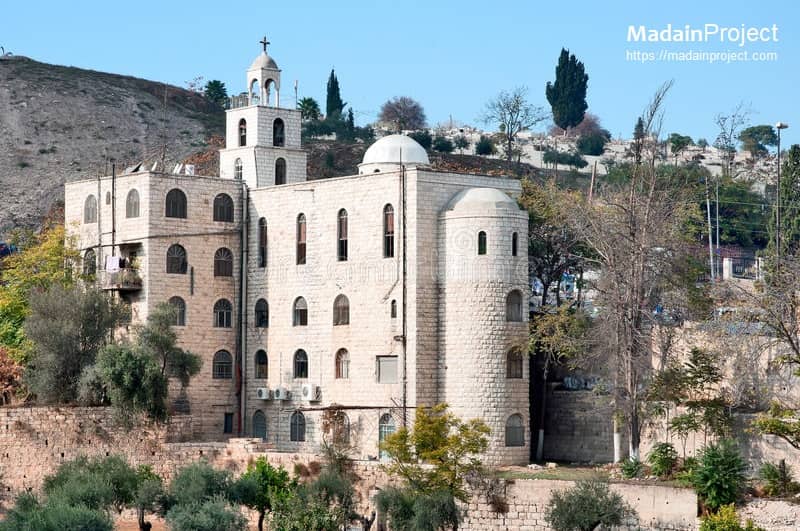 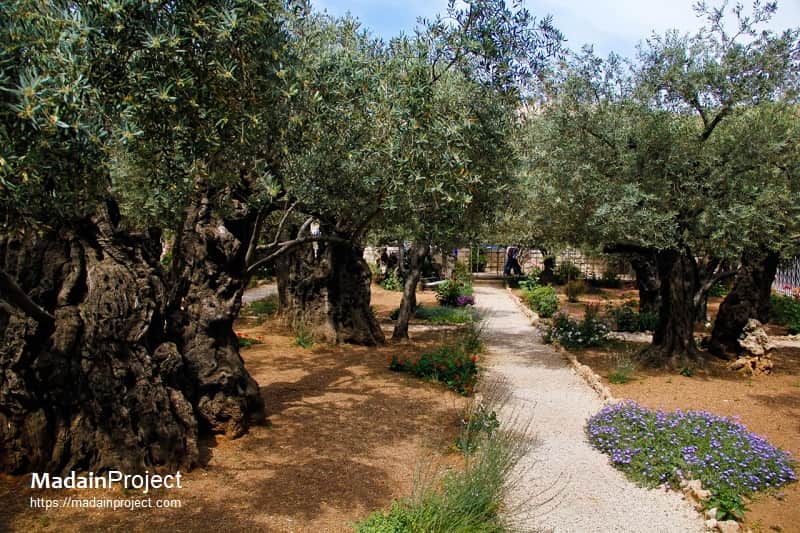 Gethsemane at the foot of Mount of Olives, to the left is the Church of all Nations, most famous as the place where Jesus prayed and his disciples slept the night before Jesus' arrest by the Romans. Literally, oilpress, is an urban garden at the foot of the Mount of Olives in Jerusalem. In Christianity, it is the place where Jesus underwent the agony in the garden and was arrested the night before his crucifixion. 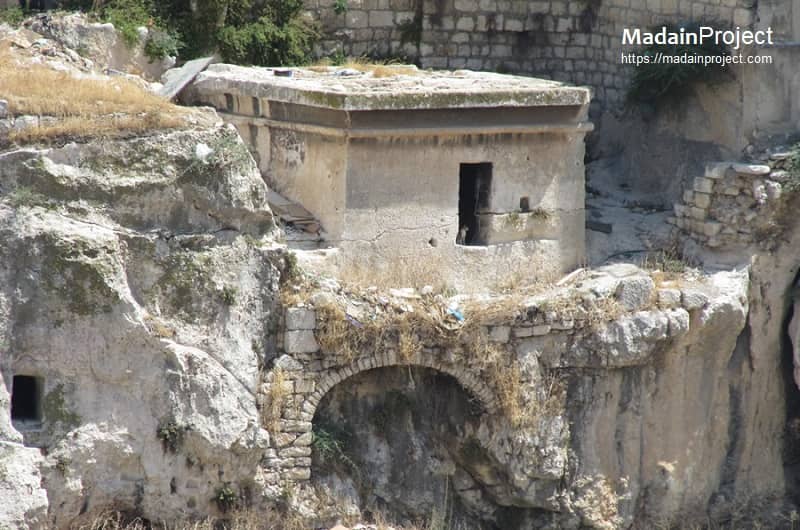 Monolith of Silwan at the Silwan Necropolis in modern day Silwan, also known as the Tomb of Pharaoh's daughter is a cuboid rock-cut tomb located in Silwan, Jerusalem dating from the period of the Kingdom of Judah; the latter name refers to a 19th-century hypothesis that the tomb was built by Solomon for his Egyptian wife. 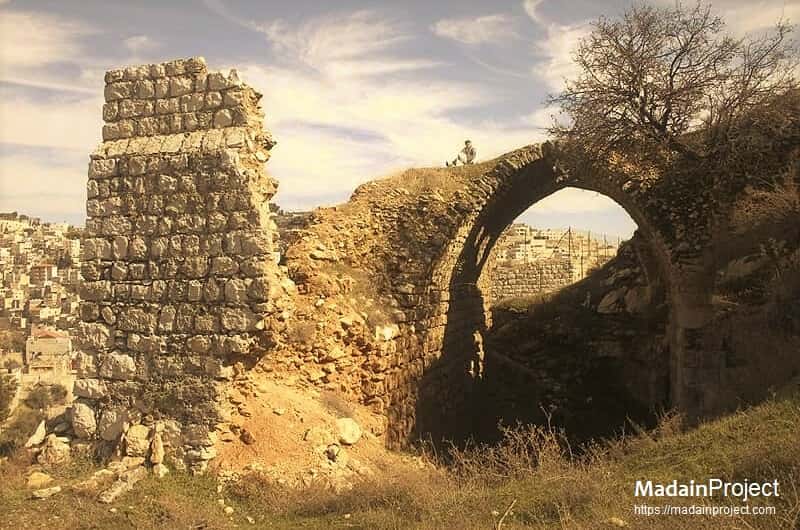 The Akeldma Tombs were discovered in 1989 at theconfluence of the Kidron and Hinnom Valleys, south of Jerusalem's Old City. After uncovering the underground spaces, archaeologists found themselves standing inside large burial complexes which appeared intact. Moving carefully from one chamber to another, flashlights revealed an abundance of artifacts scattered on the floors, pottery and glass vessels, oil lamps and many ornamental ossuaries. The three large caves proved to be part of an extensive Jewish burial ground in use at the end of the Second Temple period, which terminated in the year 70 CE, when Jerusalem was conquered and the Temple destroyed by the Roman legions. 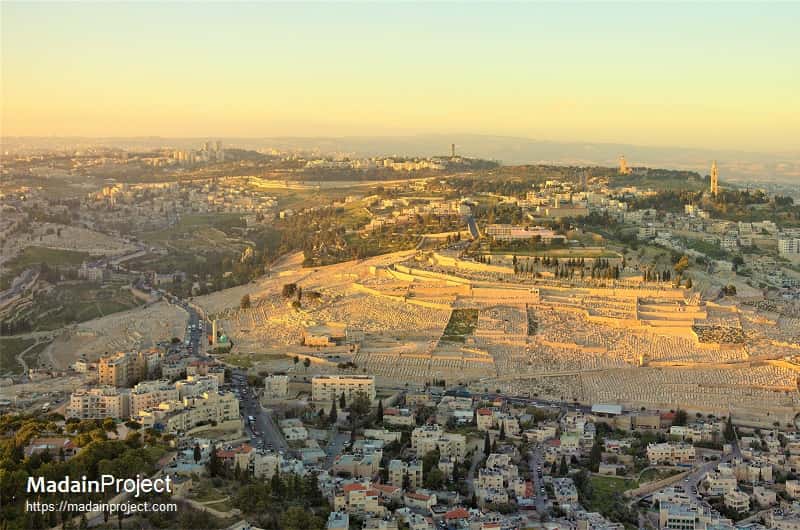 An aerial view of the Mount of Olives. Named for the olive groves that once spanned its slopes, the mount is now covered with thousands of Jewish graves, two small graveyards, one Muslim and one Christian are also present on the Mount. There are a few other points of interest including, Basilica of Agony, Tomb and Masjid of Rabiya al-Awaddiya, Augusta Victoria, Dominus Flevit, Masjid Zaitoon, Church of Mary Magdalene, Tomb of the virgin Mary, Mosque and Chapel of Ascension.