The interior of Kabah (الكعبة في الداخل), also spelled Kaaba, is relatively simpler as compared to the rest of the mosque complex. Most recently the interior of the Ka'bah was renovated in 1996 CE. The area of the Kaaba's interior is about 180 square meters.

The interior of the Kaaba is a polygon, due to the stair-well in the norther corner, which allows access to the roof. The roof is supported by three wooden pillars.

The wall directly opposite to the entrance of the Kaaba has six tablets inlaid with inscriptions, and there are two more tablets along the wall adjacent to the entrance. A small altar or table set between one and the other two. (It has been claimed that this table is used for the placement of perfumes or other items.) The interior walls, measuring 13 meters (43 feet) by 9 meters (30 feet), are clad with tiled, white marble halfway to the roof, with darker trimmings along the floor. 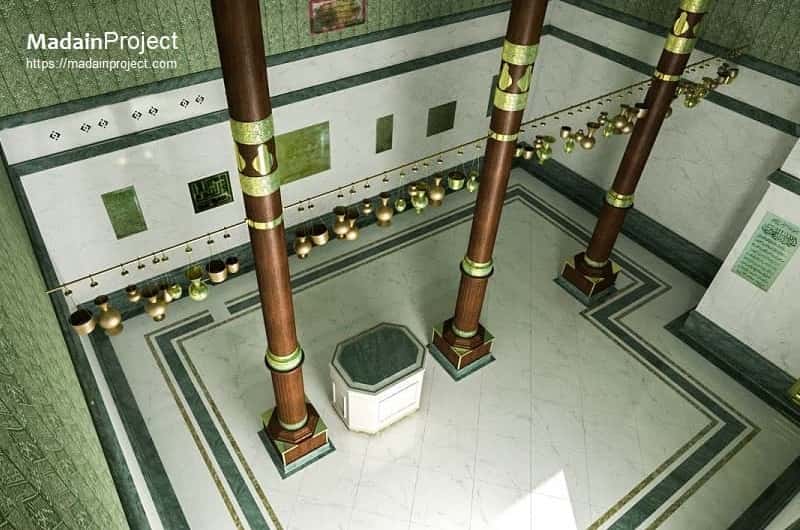 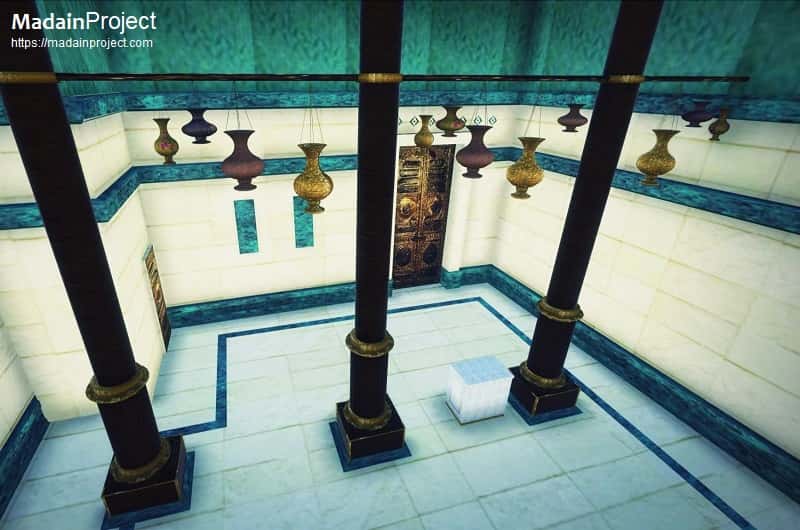 The main entrance to the Kabah is directly in the background, some of the older lamps hanging and the door to the stairs to the extreme left. Lamp-like objects (possible lanterns or the incense burners) hang from the ceiling. Along the top corners of the walls runs a green cloth embroidered with gold Qur'anic verses. Caretakers anoint the marble cladding with the same scented oil used to anoint the Black Stone outside. 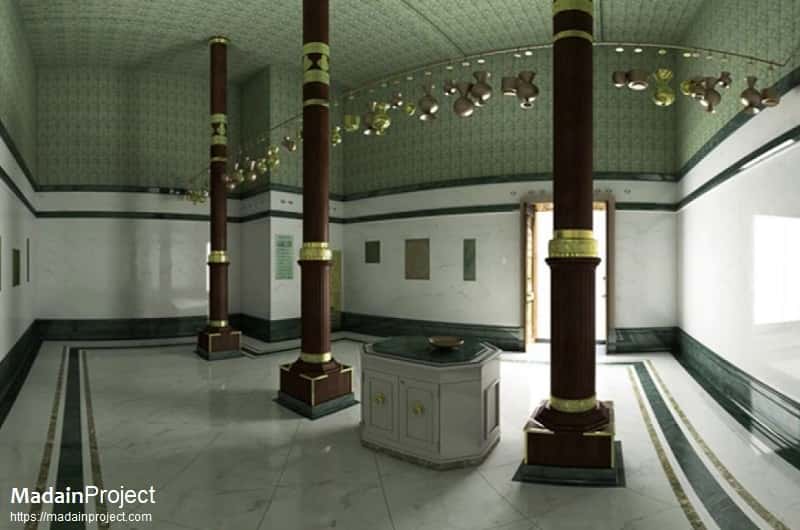 Fabric Trimming
The ceiling and the upper half of the walls are trimmed with green fabric bearing inscriptions in Arabic. itself is of a darker colour, similar in hue to the lower trimming. The floor of the Kaaba is made of marble, most which is white while some of it is colored. The walls of the Kaaba's interior are made of colorful and emblazoned marble. 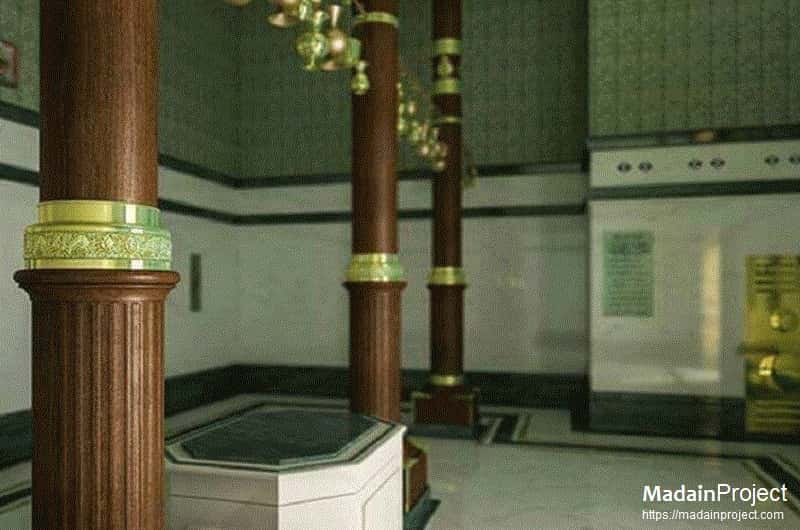 Wooden Pillars
Three pillars (some erroneously report two) stand inside the Kaaba. The Kaaba contains three wooden columns which hold the Kaaba's ceiling. Each column has a squared wooden base (inspect). The perimeter of each column is around 150 centimeters while the diameter is 44 centimeters. The wood used is one of the strongest types of wood and they were put by the prophet's companion 'Abdullah bin Zubair. The columns inside Kaaba are more than 1,350 years old and are dark brown. One of these pillars dating back to the time of Abdullah ibn al-Zubayr, circa 670 CE, is now preserved in Two Holy Mosques' Exhibition in Mecca. 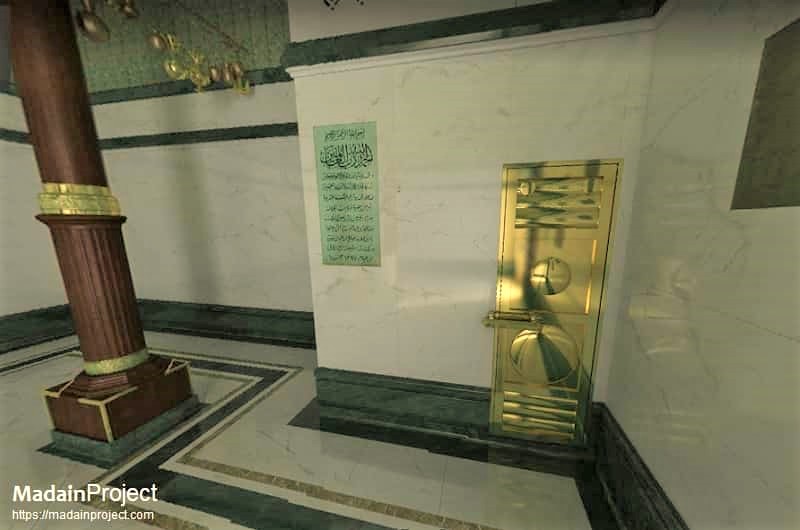 Bāb al-Tawbah
A golden door, known as the bāb al-tawbah (باب التوبة, also romanized as Baabut Taubah, literally meaning the "Door of Repentance"), located to the right of the main entrance in the north-eastern corner of the Kaaba, opens to an enclosed staircase that leads to a hatch, which itself opens to the roof. To the left of the door a plaque notes the repairs made during the era of al-Malik Khalid bin 'Abdulaziz al-Saud, in the year 1978 CE. 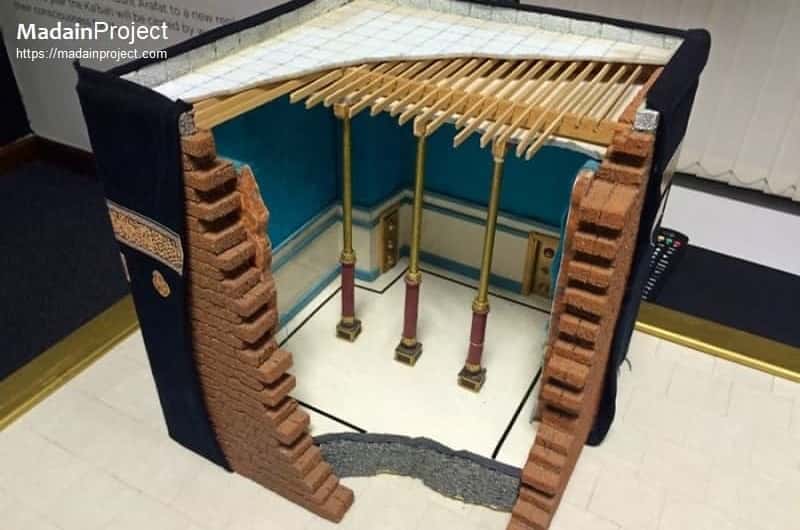 This model, from the Mecca Museum, is somewhat accurate and depicts the double-roof of the Kabah (the double roof has crawl space between the lower and upper roof), the three pillars inside, the raised marble platform, the entrance to the right, the Bab al-Taubah in the left corner as well, along the other features. In contrast to the red brics shown here, Kabah was built with black volcanic rock abundant in the surroundings of Mecca, more recently it was reconstructed with granite.