The Jerusalem Archaeological Park, also known as Ophel Garden, is located close to the Western Wall in the Old City. It is Israel/Palestine’s most important antiquity site, reaches the Temple Mount (Haram al-Sharif) on the north, the slope of the Mount of Olives and the Kidron Valley on the east, and the Valley of Hinnom on the west and the south. This exceptional area which has captivated the world’s imagination throughout history, has been designated as an archaeological park and open museum.

The exhibitions in the Park follow events spanning some 5000 years, beginning with the Canaanite (Bronze) Age and continuing through the days of the Israelite monarchy in the First Temple period. The splendors of the Second Temple and the impressive architecture of King Herod, dating to the second half of the first century BCE are a key element in the park, and the remains and monumental structures dating to the Christian and Muslim periods are clearly visible.

The archaeologial exhibitions in the park follow events spanning some 5000 years, beginning with the Canaanite (Bronze) Age and continuing through the days of the Israelite monarchy in the First Temple period. The splendors of the Second Temple and the impressive architecture of King Herod, dating to the second half of the first century BCE are a key element in the park, and the remains and monumental structures dating to the Christian and Muslim periods are also part of the park.

Entering from the Dung Gate of the Old City of Jerusalem, it brings you directly in to the Jerusalem archaeological Park and the Davidson Center. The park contains artifacts from different periods: the First and Second Temple periods, the Byzantine Muslim period, the ancient Crusades period, as well as others. The Davidson Center is a museum inside the Archaeological Park, built within the remains of a Muslim palace and offers a glimpse into the way of life.

City of David
The archaeologial area of ancient City of David is the most notable and important part of the Jerusalem Archaeological Park. The archeological exploration of the City of David began in the middle of the 19th century and continues to this day. It has fired the imagination of many scholars from different nations and backgrounds who came to excavate in Jerusalem. The latest excavations were carried out between 1978 and 1985 and there is an ongoing process of updating and revising previous interpretations. 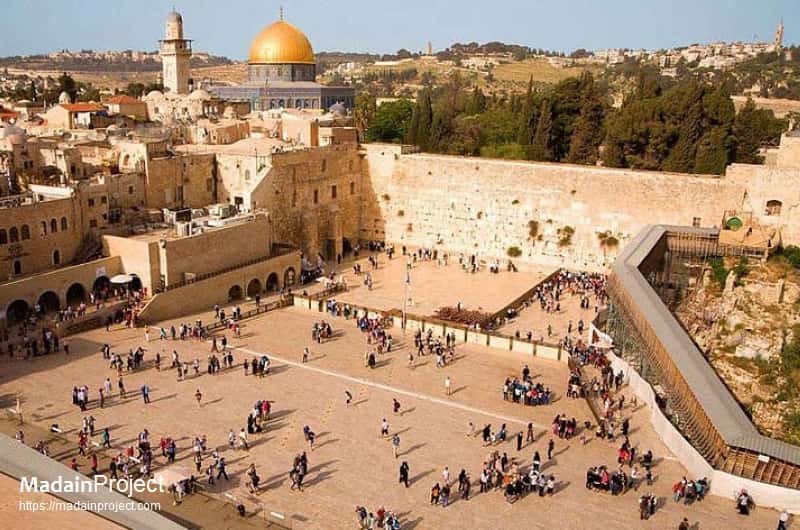 Western Wall
The Western Wall (Hebrew: Ha-Kotel Ha-Maʿaravi), also called the Wailing Wall, in the Old City of Jerusalem, a place of prayer and pilgrimage sacred to the Jewish people. It is the only remains of the Second Temple of Jerusalem, held to be uniquely holy by the ancient Jews and destroyed by the Romans in 70 CE. It is the most significant site in the world for the Jewish people.

Umayyad Palace
Early eighth century CE Umayyad Palace in Jerusalem, was apparently constructed during the reign of the Umayyad caliph El-Walid I (705-715 CE) and was destroyed in the earthquake of 749 CE. Adjacent to the southern wall of Temple Mount, it was used as the seat of caliphate during the caliph's visits to the city of Jerusalem.

Jerusalem Ophel
The Jerusalem Ophel, the raised area along the southern wall of Haram al-Sharif. This area has also been tentatively identified with Acra, the fortification built by Antiochus Epiphanes in 168 CE. In current terms, the still extant Herodian cased-in Temple Mount is bordered to the south by a saddle, followed by the ridge in case, also known as the southeastern hill, which stretches down to the King's Garden and the (lower) Siloam Pool.

South Wall
The Southern Wall is the retaining and enclosure wall at the southern end of the Haram al-Sharif (Temple Mount) and the former southern side of the Second Temple. It dates back to the reign of King Herod, and was constructed during the expansion of the Temple Mount platform southward on to the Ophel. The Southern Wall is 922 feet (281 m) in length, and which the historian Josephus equates as being equal to the length of one furlong.

Herodian Era Market Street
The Herodian Market Street is a wide and impressive street along the Western Wall's southern end. Apparently, this street used to be the area’s main street and was visited frequently by pilgrims, tourists, and sages such as Rabbi Yohanan ben Zakkai and Rabbi Akiva. Towards the northern end of the ancient street one can see a pile of huge stones knocked from the walls of Temple Mount during the 70 CE siege of Jerusalem and have been lying there ever since. The street also features Herodian era shops and a Roman bakery along with several other archaeological interests. Another impressive discovery is a drainage channel which was found under the street, containing rare finds from the days of the destruction of Jerusalem. This channel used to be the place where ancient warriors escaped to, hoping to find shelter from the Romans.