Jannat ul-Baqi' (جَنَّة ٱلْبَقِيع) is a cemetery in Medina located to the east of the Masjid al-Nabawi (The Prophet's Mosque). The mosque is built where the prophet Muhammad used to live, and is currently buried. The cemetery is also known as Jannatul Baqi, meaning "The Garden of Baqi" and Baqiul Qarqad, which means "Baqi of the Boxthorn".

Modern day aerial view of the cemetery, looking east, as seen from the balcony of Bab Abdulaziz minaret. The grounds of al-Baqi' hold much significance for Muslims, being the resting place of many of Muhammad's relatives and companions, thus making it as one of the two holiest cemeteries in Islamic tradition. After the arrival of prophet Muhammad in Medina, the area was designated as a burial groud and Asa'ad Bin Zararah was the first one to be buried here.

Looking north-west, overlooking the al-Baqi, towards the Masjid al-Nabawi. According to Islamic Tradition, more than ten thousand companions of prophet Muhammad are buried here. Some of the graves are that of Fatima bint-i Muhammad, Imam Hassan ibn-i 'Ali, Zain ul-'Abideen, Imam Baqir, Imam Jaffar Sadiq. Many traditions relate Muhammad issuing a prayer every time he passed here.

Looking north-east, the al-Baqi' graveyard is located to the east of Medina. The historical accounts by Umar Ibn Jubair and Ibn Battuta of Jannatul Baqi describe the locations of a number of important interments like Saffiya, Malik ibn Anas and Ibrahim ibn Muhammad. Many narrations attest that the Prophet visited this cemetery regularly to pray for God's forgiveness for those buried there. Four Imamah Imams: Hasan ibn Ali, Ali ibn Husayn, Muhammad al-Baqir, and Jafar al-Sadiq were also buried there.

The Bab al-Baqi' (Gate of Baqi') is named after the al-Baqi' graveyard, before the King Fahad Expansion (identify) it was the closest gate of the mosque to the Baqi' al-Gharqad (بَقِيْع الْغَرْقَد). It is also located closest to the Rawda of prophet Muhammad, and directly inline with Bab as-Salam. Area immediately outside this gate and Bab Jibraeel was used as Jenazgah (right: now enclosed and used as a storage space). 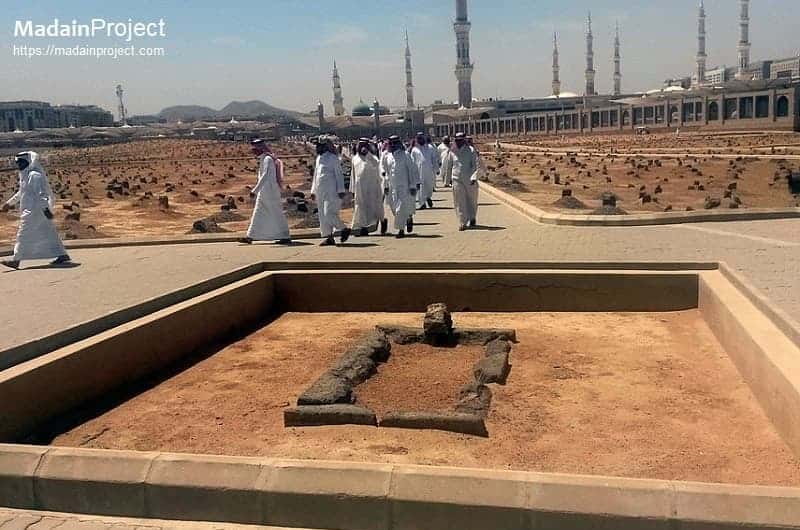 The grave of Uthman ibn Affan is one of the notable graves in Baqi ul-Gharqad. After his shahada the body was carried to Jannat al-Baqi, the Muslim graveyard, but was buried in the neighbouring Jewish cemetery due to the civil conflict resulting in his death. The first enlargement of al-Baqi in history was made by Muawiyah I, who included the huge Jewish graveyard into al-Baqi cemetery. The Umayyad Caliphate built the first dome in al-Baqi over his grave, the first to be built in al-Baqi graveyard.

The grave of Ibrahim, son of Prophet Muhammad in Baqi ul-Gharqad is among the notable interments of the cemetery. After, he was carried to the cemetery upon a little bier by prophet Muhammad, his uncle al-ʿAbbas, and others. Here, after a funeral prayer led by prophet Muhammad, he was interred. The grave was filled with sand, sprinkled some water upon it, and placed a landmark on it, [Muhammad] saying that "Tombstones do neither good nor ill, but they help appease the living.

The al-Baqi' cemetery's western gate, which allows access from the eastern courtyard of the Masjid al-Nabawi, located opposite of al-Baqi' gate.

Jannatul Baqi before 1925/1926 Demolitions: Mausoleums of several prominent Muslims were built in the cemetery since 9th century CE, Mausoleum of Uthman being the first. These were raised and demolised circa 1920s, for the second time, following reformations made by Abdul Wahab. The most famous person buried at al-Baqīʿ during the lifetime of the Prophet of Islam, Muhammad, was his infant son Ibrahim.