The Ivory Pomegranate is a thumb-sized semitic ornamental artifact acquired by the Israel Museum. It is not actually made of ivory, but of hippopotamus bone and bears an inscription; Holy (Sacred) to the Priest of the House of God (YHWH). It was once believed by some scholars to have adorned a sceptre used by the high priest in Solomon's Temple.

At the time of its discovery, it was thought to have adorned the High Priest's sceptre within the Holy of Holies, thus potentially proving the existence of Solomon's Temple. The artefact is a small ornamental bone object engraved with a short inscription in paleo-Hebrew. While it is still priceless as a Semitic artifact from 13th Century BCE, its connection to the Holy of Holies has been greatly disputed by Israeli and Italian archeologists specializing in Roman and Semitic artifacts as forgery. 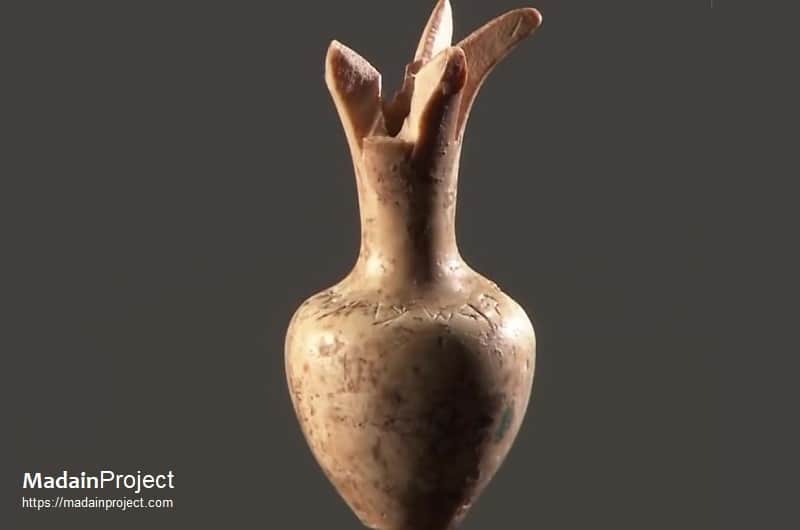 Body of the Ivory Pomegranate
A significant part of the body of the pomegranate is broken including two breaks to the long petals of the fruit. The famous inscribed ivory pomegranate is about 1.5 inches high and less than an inch in diameter. It has a hole at the bottom where a scepter rod had been presumably inserted.

Inscription
The inscription is inscribed in circular fashion along the shoulders of the pomegranate which is the shape of the fruit in blossom stage. The thumb-sized ivory pomegranate measuring 44 millimetres (1.7 in) in height, bears an ancient Hebrew inscription that reads, depending on the point chosen as the beginning in the circular inscription, "Belonging to the Temple [literally 'house'] of ---h (inspect), holy to the priests" or "Sacred donation for the priests of [or 'in'] the Temple [literally 'house'] of ---h" (inspect).

Structural Break
There is a vertical break on the body that cuts through the inscription, so that three letters are fragmentary and nine complete. Two areas of this fracture are lighter shades and considered to be new breaks on top of the ancient break. A committee led by Tel Aviv University’s Yuval Goren had previously concluded that the inscription was a forgery because three critical letters adjacent to an ancient break stopped before the break.

Its authenticity has been debated since it first came to the attention of the public over 30 years ago. Professor Roman (2008), an Israeli scientist employed by the defense in the Jerusalem forgery trial has concluded that the inscription on the famous ivory pomegranate, consecrated to the priests") is authentic. If the inscription is authentic, the pomegranate is probably the only surviving artifact from Solomon’s Temple.

If the small artefact was in fact part of a priest's garments, which is highly unlikely, almost definitely unlikely, it would have had access ot the inner most sanctuary of the Solomon's Temple, the holy of holies.