The Huldah Gates, are the two sets of now-blocked gates in the Southern Wall of the Temple Mount, situated in Jerusalem's Old City. The gates and passageways are now part of Masjid al-Aqsa al-Qadimi and Masjid al-Marwani. The term is currently being used for the remains of two later sets of gates, the Triple Gate and the Double Gate, known together as the Huldah Gates, built as part of the much extended Herodian Temple Mount, situated in Jerusalem's Old City. There still are a few Herodian architectural elements visible outside and inside the gates, while most everything else of what we see today is later, Muslim-period work.

The eastern set is a triple arched gate (inspect), which is now walled up and constitues the qibla wall of Masjid al-Marwani (Solomon's Stables). Although walled up, the passageways are still functional and allow access to the recently built (circa 1996 CE) Masjid al-Marwan. The Triple Gate was blocked in the 11th century. The western jamb is Herodian, while the rest of what we see today is Umayyad. Inside the Triple Gate, in Herodian times there must have been a passageway identical to the one inside the Double Gate.

Each arch of the double gate led into an aisle of a passageway leading from the gate into the Mount, and to steps leading to the Mount's surface; when the al-Aqsa Mosque was built, the old steps were blocked, and the eastern aisle lengthened so that new steps from its end would exit north of the Mosque. The eastern portal of the double gate is now walled up and constitues the qibla wall of Masjid Aqsa al-Qadimi, the western portal although open it allowd entry in to a Fatimid era fortification tower's base, where recently a libray was established.

Depiction in the Holyland Model of Jerusalem

The Huldah Gates are also depicted in the Holyland Model of Jerusalem, which was designed, circa 1970 CE, by Israeli historian and geographer Michael Avi-Yonah based on the writings of Flavius Josephus and other historical sources. The Huldah gates in the model were depicted as having two arched portals each, but modern studies have shown that the eastern gates had three arched portals. Since its construction a number of changes have been made to correct the model according to the latest finds. This area in front of the southern wall constitues the Ophel mentioned in the Bible. 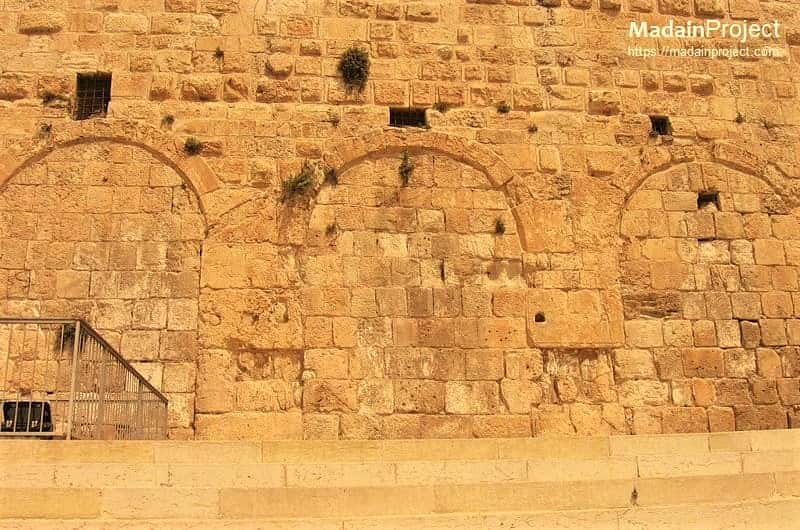