This page attempts to enlist the known historical manuscripts of Quran. Although in its strictest definition the term "manuscript" referes to a handwritten work, this list may tentatively include early printed works as well.

In Muslim tradition the Quran is a final revelation from God, Islam’s divine text, delivered to the Islamic prophet Muhammad through the angel Jibril (Gabriel). Prophet Muhammad’s revelations were said to have been recorded orally and in writing, through Muhammad and his followers up until his death in 632 CE. These revelations were then compiled by first caliph Abu Bakr and codified during the reign of the third caliph Uthman (reigned 644–656 CE) so that the standard codex edition of the Quran or Muṣḥaf was completed around 650 CE, according to Muslim scholars.

Codex Parisino-petropolitanus
The Codex Parisino-petropolitanus (left: recto of the first folio), possibly the oldest extant Quranic manuscript, dated to the 7th or 8th century. The largest part of the fragmentary manuscript are held at the Bibliothèque nationale de France, Paris, as BnF Arabe 328(ab), with 70 folia. Another 46 folia are kept in the National Library of Russia in Saint-Petersburg. Two additional folia have been preserved, one kept in the Vatican Library (Vat. Ar. 1605/1) and the other in the Khalili Collection in London (KFQ 60). Taken together, the extant manuscripts cover about 45% of the text of the Quran.

Sana'a Script
The Sana'a Manuscript is one of the oldest Quranic manuscripts in existence. It was found, along with many other Quranic and non-Quranic fragments, in Yemen in 1972 during restoration of the Great Mosque of Sana'a. The manuscript is written on parchment, and comprises two layers of text (see palimpsest). The upper text conforms to the standard 'Uthmanic Quran, whereas the lower text contains many variants to the standard text. An edition of the lower text was published in 2012. A radiocarbon analysis has dated the parchment containing the lower text to before 671 CE with a 99% accuracy. 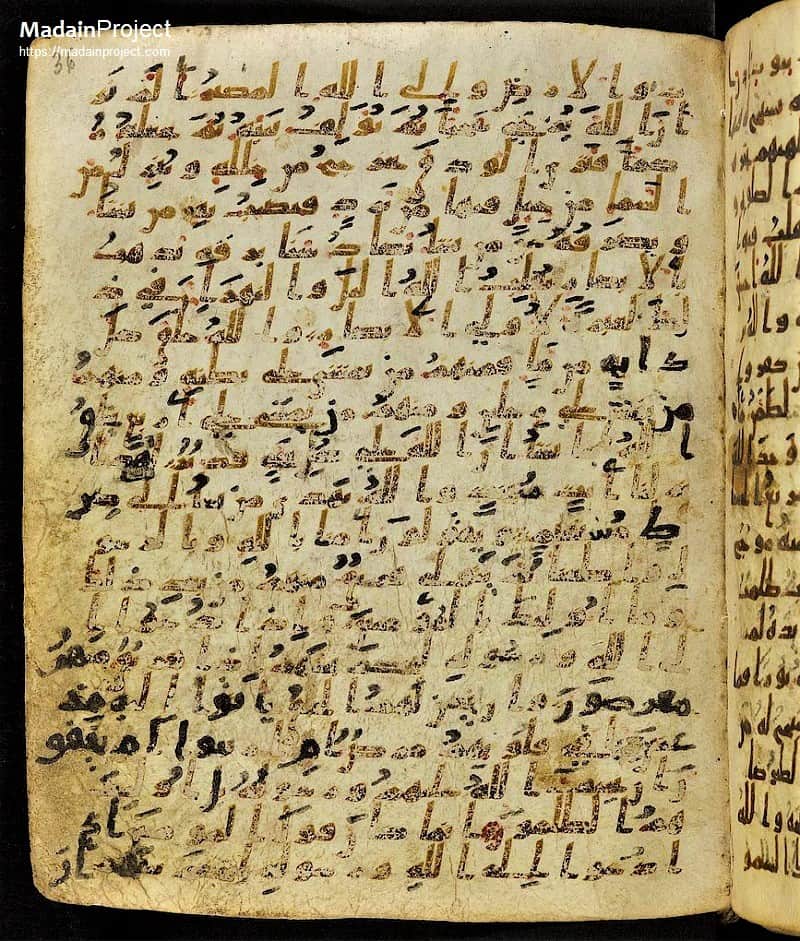 Tübingen fragment
The Tübingen fragment In November 2014, the University of Tübingen in Germany announced that a partial Kufic[disputed – discuss] manuscript in their possession (Ms M a VI 165), had been carbon dated (with a confidence of 95%), to between 649 and 675 CE. The manuscript consists of the Quranic verses 17:36, to 36:57 (and part of verse 17:35). 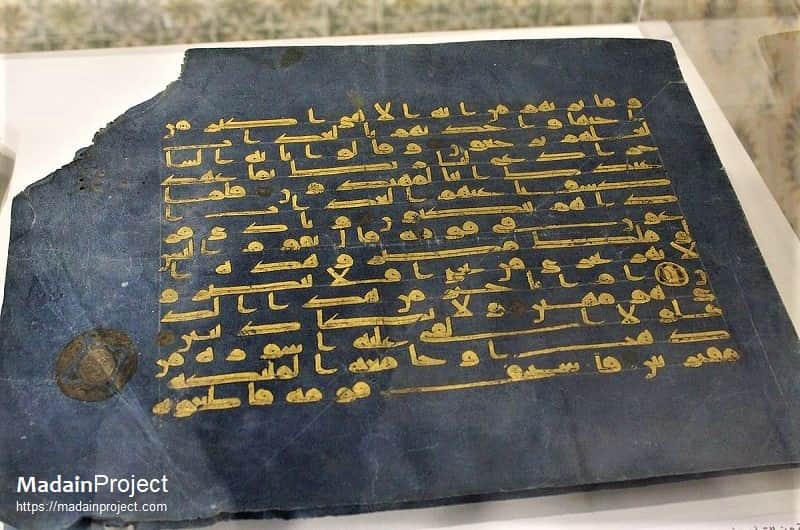 Blue Quran
The Blue Qur'an (المصحف الأزرق) al-Muṣḥaf al-′Azraq) is a late 9th to early 10th-century Fatimid Tunisian Qur'an manuscript in Kufic calligraphy, probably created in North Africa for the Great Mosque of Kairouan. It is among the most famous works of Islamic calligraphy, and has been called "one of the most extraordinary luxury manuscripts ever created". Although scholars generally agree on its provenance and dating, recent scholarship by Alain George dates the manuscript rather earlier, to the early Abbasid caliphate.

Samarkand Kufic Quran
The Samarkand Kufic Quran, preserved at Tashkent, is a Kufic manuscript, in Uzbek tradition identified as one of Uthman's manuscripts, but dated to the 8th or 9th century by both paleographic studies and carbon-dating of the parchment. Radio-carbon dating showed a 95.4% probability of a date between 795 and 855 CE. 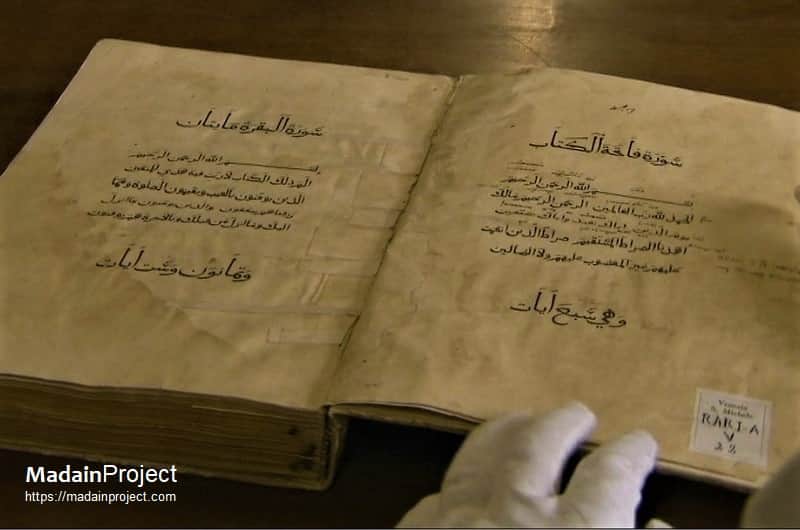 First Printed Quran
Between 1537 and 1538 Paganini and his son published what was probably the first printed edition of the Quran in Arabic. This work was likely intended for export to the Ottoman Empire, with which Venice had extensive trade ties. In the end, the venture was unsuccessful; the entire print run is reported by various contemporaries to have been lost, though the explanations for the disappearance vary widely. However, one copy of this printed Quran was found in 1987 in a monastery in Isola di San Michele (Venice). 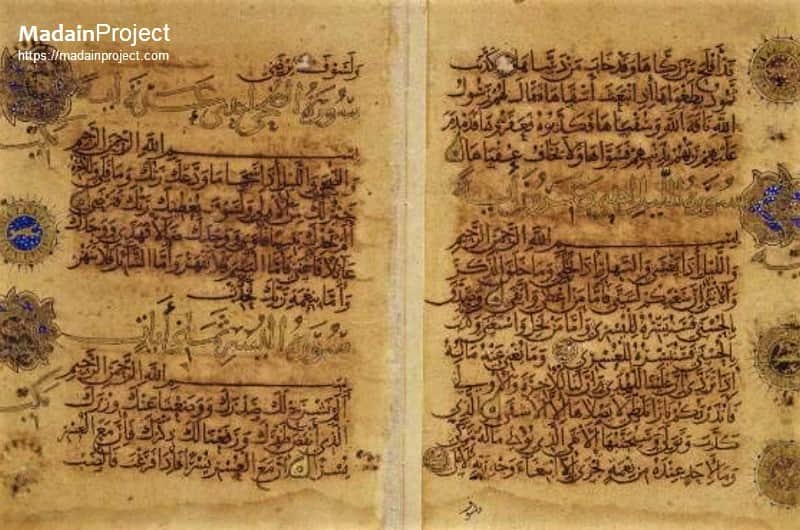 Ibn Bawwab Quran
The Ibn al-Bawwab Quran Manuscript is a fully-surviving Quran in cursive style (Nakshi script). It is currently placed in the Chester Beatty Library, Dublin. This Manuscript was written by an Arab Calligrapher, Abu al-Hasan Ali ibn-Hilal, commonly known as Ibn al-Bawwab in Baghdad. This manuscript dates back to 391 Hj.