Herod's Gate (Arabic: باب الزاهرة‎, Bab az-Zahra) is a gate in the northern walls of the Old City of Jerusalem. It connects the Muslim Quarter inside of the old city to the eponymic Palestinian neighbourhood of Bab az-Zahra, situated just outside. It is a short distance to the east of the Damascus Gate. Its elevation is 755 meters above sea level.

Herod's Gate (peek inside) is the Christian name of the gate. In Luke 23:7 Jesus is sent by Pontius Pilate to Herod Antipas, and a Christian tradition identifies the site of nearby Greek Orthodox Church of St Nicodemus with the palace of Herod Antipas. Bab az-Zahra is the Arab Muslim name of the gate. In proximity to the gate is an Arab neighborhood called Bab az-Zahra. Az-Zahra is a corruption of the name As-Sahira given to the hill and cemetery across the road, where people are buried who have performed the pilgrimage to Mecca.

By 1875, in order to provide a passageway to the new neighborhoods which were beginning to develop north of the Old City of Jerusalem, the Ottomans opened a new gate in the northern, frontal wall of the tower, which faces the Sultan Suleiman Street and offers easier access, and closed the original lateral gate. In 1998 and during several subsequent excavation seasons (the latest in 2004), archaeologists of the Israel Antiquities Authority dug in the eastern area of Herod's Gate.

Above the gate is a guardroom and iron steps that lead to the ramparts (inspect) walk atop the Old City walls. In 1986, the Jerusalem Foundation supported a project to restore the gate and to construct an entrance plaza that was previously a parking area. Other reconstruction work included paving, repairs to steps and improvements to storefronts. The gate has a small entrance topped by a pointed arch. Above the entrance and below the arch is a plate that is merely decorative and devoid of the usual inscription. 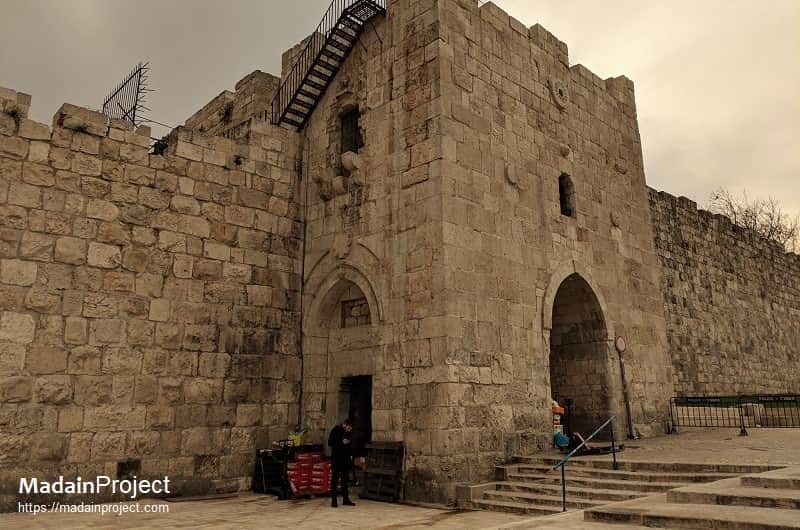 The current entrance of Bab al-Sahira is modern, dating back to the early 20th century. The original entrance was from the eastern side, in keeping with the construction style of walls of the city in the middle ages, namely, the importance of having a low passageway or a right angle. This does not exist nowadays; the entry to the gate is in a straight line. The entrance leads to a van vaulte parlor, leading, in turn, to a passageway that shifts to the left and opens up into the city.

This modest gate, which opens from a wall tower, is one of the newest gates of Jerusalem. At the time when Suleiman the Magnificent built the city walls in the 1530s, a small wicket gate was situated in the eastern, lateral wall of the tower, which was rarely opened. Formerly, the sprawling residential area within this gate was known as Bezetha (effectually translated as "New City"), settled during the late Second Temple period to accommodate Jerusalem's growing population.

This gate is also known as Herod's Gate because it leads to the place where King Herod's palace used to be. It is Also called the Sheep's Gate due to the weekly sheep market that used to be held in the square outside the gate. Rather plain (and much less crowded) than the other Old City gates, Herod's Gate stands just 100m east of the point at which the Crusaders breached the city walls on 15 July 1099.