Hattusa (also Ḫattuša or Hattusas) was the capital of the Hittite Empire in the late Bronze Age. Its ruins lie near modern Boğazkale, Turkey, within the great loop of the Kızılırmak River (Hittite: Marashantiya; Greek: Halys).

Before 2000 BCE, the apparently indigenous Hattian people established a settlement on sites that had been occupied even earlier and referred to the site as Hattush. The Hattians built their initial settlement on the high ridge of Büyükkale.

The earliest traces of settlement on the site are from the sixth millennium BCE. In the 19th and 18th centuries BCE, merchants from Assur in Assyria established a trading post there, setting up in their own separate quarter of the city. The center of their trade network was located in Kanesh (Neša) (modern Kültepe). Business dealings required record-keeping: the trade network from Assur introduced writing to Hattusa, in the form of cuneiform. 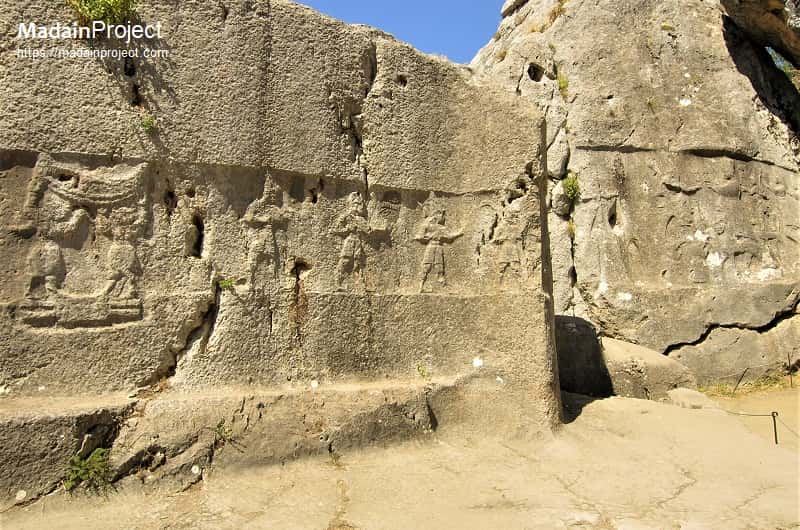 Walls
At its peak, the city covered 1.8 square kilometers and comprised an inner and outer portion, both surrounded by a massive and still visible course of walls erected during the reign of Suppiluliuma I (circa 1344–1322 BCE). The city featured over 6 kilometers of walls, with inner and outer skins around 3 meters of thick and 2 meters of space between them, adding 8 meters of the total thickness. Outside the walls are cemeteries, most of which contain cremation burials. The walls were erected using the natural shape of the terrain or completely changing it, depending on the architectural and strategic needs.

Lions' Gate
The capital of the Hittites - Hattusa - was surrounded by massive fortifications (inspect) when the Hittite civilization had a status of the Near East superpower. At least six gates let people enter the interior of the city. The Lions Gate is similar to the construction techniques seem in Mycenaean Greece, in particular, to another Lion Gate - the one at the entrance to the city of Mycenae.

Sphinx Gate
The inner doorway, known as the Sphinx Gate was adorned with sphinxes that were almost three dimensional, not only the front of their bodies looking towards the city but also with high wings on the sides and long upright tails. Only one original Sphinx is still in place while two others are kept in the local museum. All four door jambs of the gate bore representations of Sphinxes.

King's Gate
The King's Gate (tr. Kral Kapısı) is situated in the south-eastern part of Hattusa city walls. It is worth the attention of visitors especially because of its excellent state of preservation. Its shape and size are similar to the Lion Gate in the south-western part of the fortifications. The gate is flanked by two towers, and there are two parabolic-shaped door passages: external and internal.

Hittites, a civilization forgotten for more than 3,000 years, until stunning archaeological discoveries mark its rebirth. In 1876, Archibald Henry gave a groundbreaking speach to the Society of Biblical Archaeology in London. He claimed he had established a connection among all the monuments and was able to partially decipher one of the stone reliefs. He argued that the inscriptions belonged to the Hittites. Once thought to be a Biblical fable, was now being unwrapped as a fact.