The Great Ziggurat of Ur is a Neo-Sumerian ziggurat in what was the city of Ur near Nasiriyah, in present-day Dhi Qar Province, Iraq. The structure was built during the Early Bronze Age (21st century BCE) but had crumbled to ruins by the 6th century BCE of the Neo-Babylonian period, when it was restored by King Nabonidus.

The Ziggurat was part of larger temple complex, built in 2100 BCE by King Ur-Nammu who dedicated in honour of Nanna/Sîn and rebuilt in 600 BC by Nabonidus and was dedicated to moon god Nanna. The remains of the ziggurat consist of a three-layered solid mass of mud brick faced with burnt bricks set in bitumen.

Clearly the most important part of the ziggurat at Ur was the Nanna temple at its top, but this, unfortunately, has not survived. Some blue glazed bricks have been found which archaeologists suspect might have been part of the temple decoration.

The Ziggurat of Ur is the best-preserved of those known from Iran and Iraq, besides the ziggurat of Dur Untash (Chogha Zanbil). It is one of three well preserved structures of the Neo-Sumerian city of Ur, along with the Royal Mausolea and the Palace of Ur-Nammu (the E-hursag). 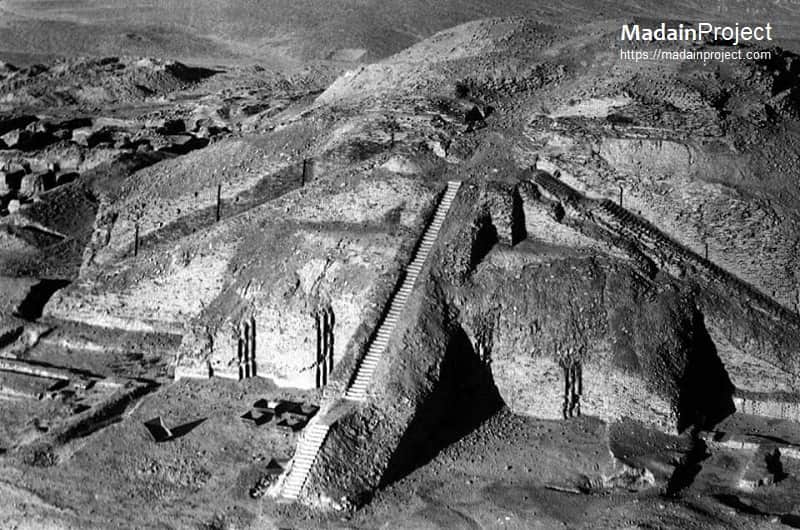 The great Ziggurat as it stood in 1920s, was first discovered by William Loftus in 1850 and first excavations were conducted by John George Taylor. The site was extensively excavated in the 1920s by Sir Leonard Woolley in the period of 1922 to 1934. At the time, the lowest layer of the remains corresponded to the original construction of Ur-Nammu, while the two upper layers were part of the Neo-Babylonian restorations.

The western exposure of the Great Ziggurat. The remains were encased by a partial reconstruction of the façade and the monumental staircase during the reign of Saddam Hussein.

Approaching the summit via the central staircase, these monumental stairs lead only to the lowest course of the facade and were rebuilt along with the lowest level of the Ziggurat in 1980s. The lower parts of the ziggurat, which do survive, include amazing details of engineering and design. 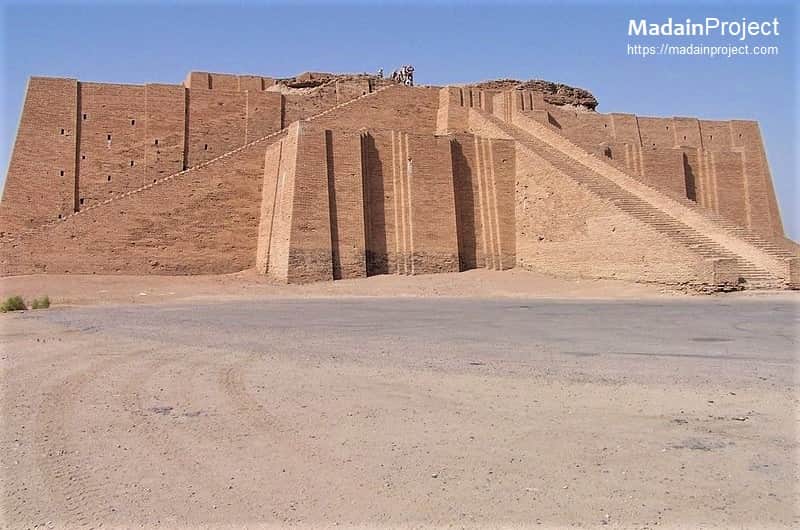 At the top the partially reconstructed fundations of the second level are also visible. The remains of the surrounding structure can also be seen in the background. The core of the ziggurat is made of mud brick covered with baked bricks laid with bitumen, a naturally occurring tar. Each of the baked bricks measured about 11.5 x 11.5 x 2.75 inches and weighed as much as 33 pounds. The lower portion of the ziggurat, which supported the first terrace, would have used some 720,000 baked bricks. The resources needed to build the Ziggurat at Ur are staggering.

Ziggurat
The ziggurat was the center piece in a much larger temple complex that served as an administrative center for the city, and which was a shrine of the moon god Nanna, the patron deity of Ur. King Nabonidus, the last king of the Neo-Babylonian Empire in the 6th century BCE, after "finding little left but the last stage and nothing to guide him as to the monument's original appearance", had it restored in seven stages rather than three.

The structure would have been the highest point in the city by far. The massive step pyramid measured 64m (210 ft) in length, 45m (148 ft) in width and over 30m (98 ft) in height. The height is speculative, as only the foundations of the Sumerian ziggurat have survived.

Dub-Lal-Makh Temple
The remains of Dub-Lal-Makh, a small temple situated at Ziggurat Railing in the eastern angle that subtends ziggurat. The temple consists of two rooms one internal and was a little bit higher than the other room and represented a place for divine isolation or solitude. Originally the temple was an entrance to the passage that leads to the temple of mood deity atop the great ziggurat.

Shrine of Nanna
It was located north-west of the Great Ziggura of Ur.

A brick stamped with the name of Ur-Nammu of Ur, the builder of the Great Ziggurat. The lighter part on the right is reconstructed. Neo-Sumerian Period. Erbil Civilization Museum, Iraqi Kurdistan. The brick is stamped with an inscription written in the Sumerian language. 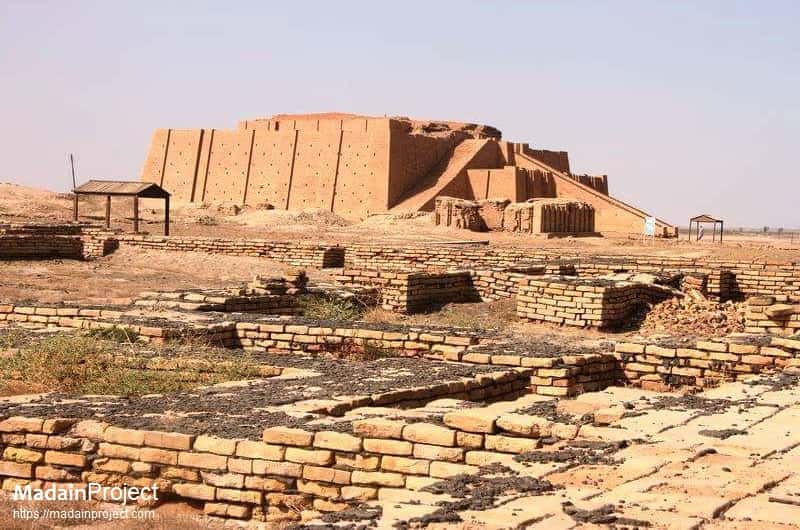