The Funerary Complex of Teti (مجمع تيتي الجنائزي) is an ancient Egyptian pyramid-complex or burial complex belonging to the sixth dynasty (circa 2330 BCE) pharaoh Teti. The complex of Teti consists of the main Pyramid of Teti, a smaller cult-pyramid, the mortuary temple, stores, an ascending passage and the valley temple.

The pyramid complex of Teti follows a model established during the reign of Djedkare Isesi, the arrangement of which is inherited from the funerary complexes of Abusir.

The plan of the temple of Teti is also comparable to that of Unas, its immediate predecessor. Teti's temple has a somewhat special plan, however, due to a deviation of the floor which traditionally should have been located in the axis of the temple but here is moved south. It then accesses the temple through a hallway of the north–south facade joining the east–west axis of the monument. Followed in this main axis is a second hall. The thickness of the walls suggests a vaulted cover. It was probably the "Room of the Greats", on the walls of which the royal family and influential members of the court were to be represented assisting and accompanying the eternal journey of their sovereign. 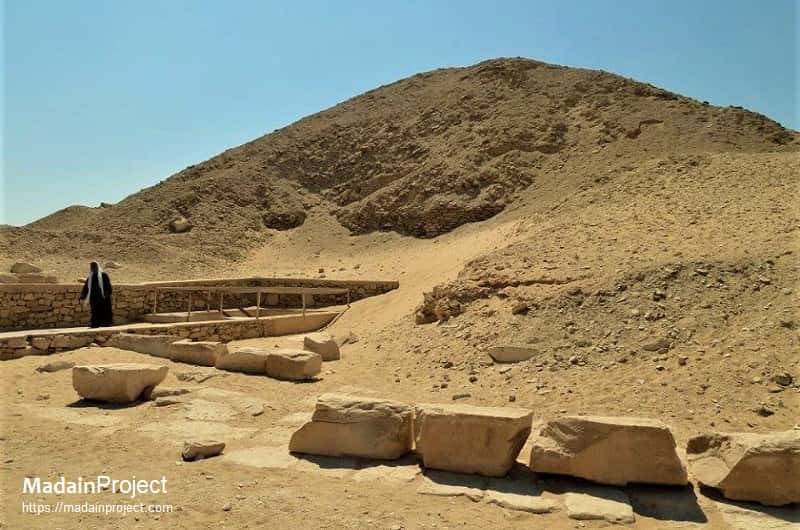 Pyramid
The Pyramid of Teti is the largest and the central structure of the entire funerary complex. The entrance to the pyramid is located on the north side, followed by a descendinggallery leading to a hall, then to a horizontal corridor with 3 portcullises. The corridor eands with three chambers; a hall in the middle, the burial chamber containing a basalt (or graywacke) sarcophagus, and three small chambers used as stores.

Satellite Pyramid
The satellite-pyramid was the last element essential to the funerary cult. It was encircled in its own peribolos. Since it was located southeast of the royal pyramid and therefore was accessible only through a corridor of stores and halls of worship. This small cult pyramid covers an underground plan consisting of a short ramp leading to a single underground chamber. In the middle of the courtyard of the paribolos, facing east and west, are two landscaped basins in the granite floor. Their use is disputed by Egyptologists, but the location of these basins, following the path of the sun, suggests ritual practices that shed some light on the role of this monument.

Other Structures
The mortuary temple was used for religious rituals related to the king after hisdeath and contains a hall of columns, the ritual chamber (the holy of holies), the altar and a number of chambers used as stores.