This page attempts to enlist Expansion Chronology of Masjid al-Nabawi

Soon after arriving in Medina, prophet Muhammad and his companions embarked on building the masjid. Originally a very modest structure, today it is one of the largest mosques in the world.

One of the world’s largest mosques, the Prophet’s Mosque underwent several expansions throughout its history, starting with the days of the caliphs, followed by the Umayyads, the Abbasids, the Ottomans, and, finally, the Saudi era, during which it underwent the largest expansion in its history and was the first place in the Arabian Peninsula to be lit by electric light bulbs in 1908/1909 (1327 Hijri). 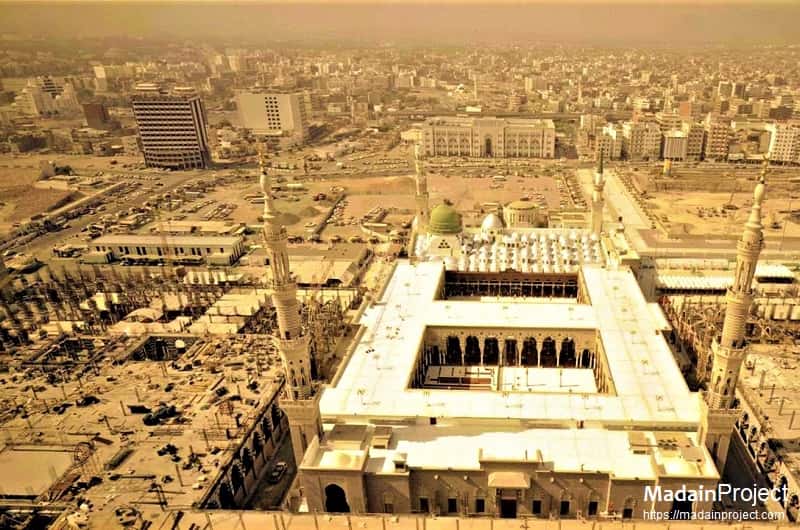 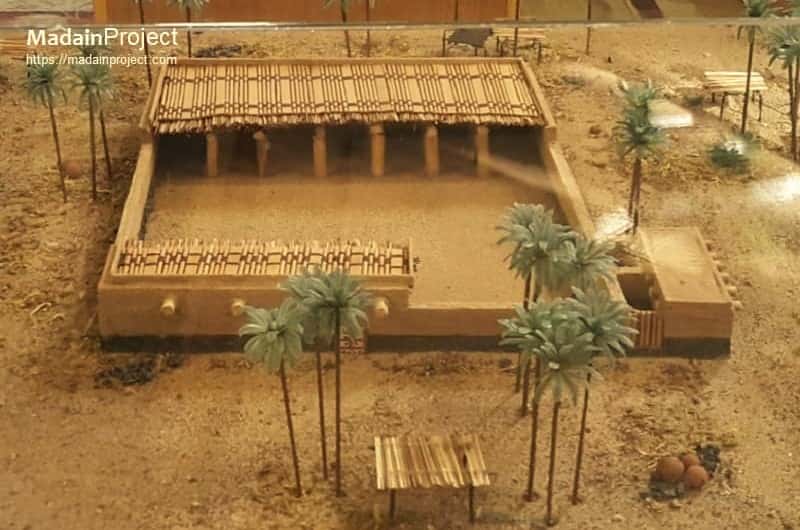 A model of the original mosque at the time of Prophet Muhammad, at Dar al Medina museum, built by prophet Muhammad after he arrived in Medina following Hejrah from Mecca.

At the time the land was owned by two young orphan brothers, Sahl and Suhayl, and when they came to know that Muhammad wished to acquire their land for the purposes of erecting a mosque, they went to the Prophet and offered the land to him as a gift; the Prophet insisted on paying a price for the land because they were orphaned children. The price agreed upon was paid by Abu Ayyub al-Ansari, who thus became the endower or donor of Al-Masjid an-Nabawi on behalf of, or in favor of, Muhammad.

The original mosque was 35 meters long and 30 meters wide. The imagined layout of the mosque as it might have looked in the first year of Hijrah, back then it was oriented north-south. The qiblah wall was to the north towards al-Aqsa and the al-Suffah was along the south wall. For the roofing palm leaves were used and and trunks of palm trees as columns.

In its early days, the mosque’s floor was not covered with anything until in 624 CE (3 Hj.), when it was covered with pebbles. 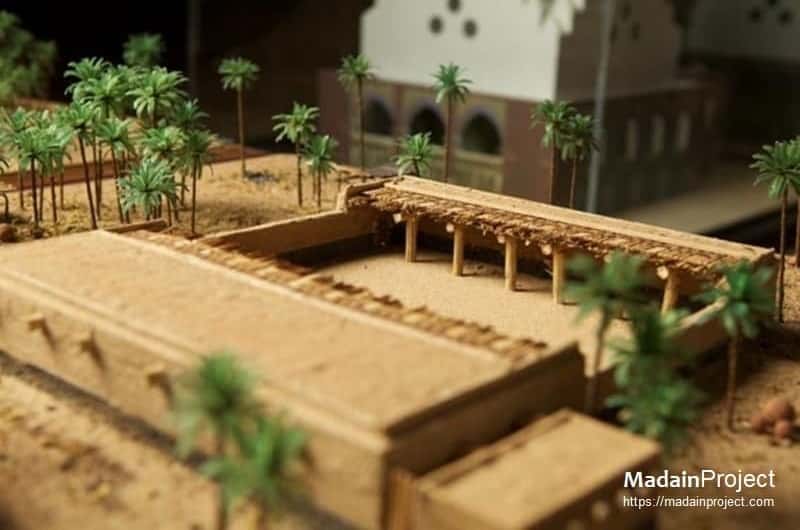 First expansion of Masjid al-Nabawi took place right after the Battle of Khaybar, Width was increased by 20 meters and the length by 15 meters. The new dimensions became 50×50 meters. The northern boundary of the Mosque was where the Turkish construction ends in this direction. On the west side its boundary was five columns west of the pulpit. You will see written on each column there ‘The boundary of Prophet’s Mosque.’ The foundation was laid with stones and the walls were built of unbaked mud bricks like before. The columns were made of palm tree and the roof was covered by branches of palm trees. The height of the roof was increased from 2½ meters to 3½ meters. Caliph Osman paid for the land for this addition of the mosque.

Around the same time a companion of prophet Muhammad Tamim al-Dari brought an oil lamp from Syria and it started to be used to lighten the mosque. al-Dari was praised by the Prophet due to his service to the community.

The Masjid Nabawi underwent its first expansion after the time of prophet Muhammad in the days of Caliph Umar ibn al-Khattab starting in 638/9 CE (17 Hj.). Caliph Abu Bakr al-Siddiq did not work on expanding the mosque since he was busy with the Ridda Wars, also known as the Wars of Apostasy.

People requested the Caliph to extend the mosque since the population of muslims increased considerably. In 17Hj. Umar al-Khattab extended the mosque by five meters to the south, 15 meters to the north and 10 meters to the west. New dimensions of mosque thus became 70×60 meters. The western boundary of the mosque was upto seventh column from the pulpit. The roof was raised to 5½ meters.

Umar also had several oil lamps installed in the moque, and these lamps used to be hung from the walls. The oil was procured from the Bait ul-Mal. During this time at least two thuribles were also placed in the mosque.

In the western wall a new door was added, called Bab Salam. Similarly a door was added in the eastern wall, called Bab Nisa. Omar ibn al-Khattab also made a platform on the eastern side of the mosque by the side of the house of Khaled bin Waleed. Since it is not permitted to gossip or raise voice in a mosque, caliph Umar said, “Those who want to engage themselves in gossip or recite poetry may use this platform.”

The roof was made of teak wood. The columns were also made of decorative stones and were hollow inside. Iron bars and molten lead was put inside the columns to reinforce them. Caliph Uthman supervised the construction activities personally. He made a protective enclosure around the area where he led the salat to avoid attack on him during the salat. This enclosure had windows and people could see the Imam through these windows. At present the Imam leads the salat from the same spot where Usman ibn Affan did. There is no protective enclosure nowadays. However, the security personnel are posted there before, during and after the salat to avoid any mishap.

To record his restoration and renovations, Waleed also spelled as Walid had an epigraph placed in the mosque for the first time. This was the start of the recording of every renovation and expansion that came later.

The roof was made of teakwood and was raised to a height of 12.5 meters. This lower roof was covered by another roof to protect against severe weather. Marble slabs were fixed on the inner side of walls. These walls also had multicolored stones and gold polish put on them at different spots. Gold polish was also put on the frames of the doors. Omar bin Abdul Aziz personally supervised the construction. He was the one who built four minarets on the four corners of the mosque and the new mosque had twenty doors. These construction activities took three years from 88 Hj. through 91 Hj. 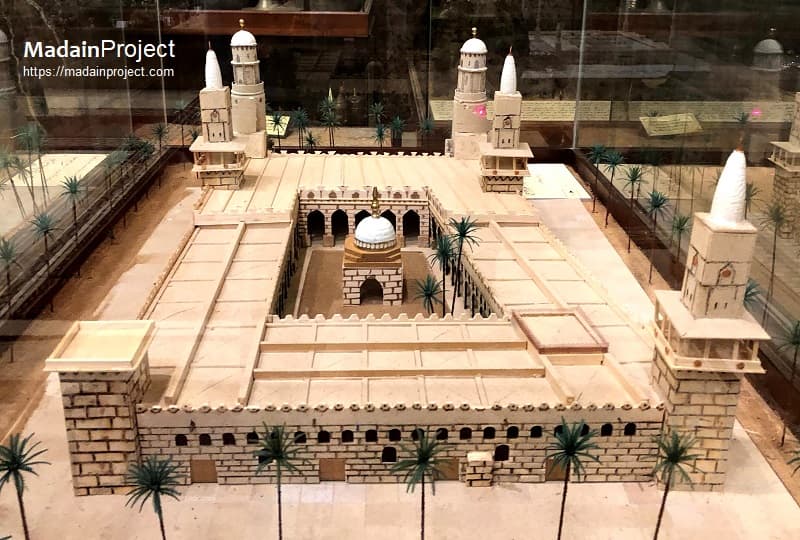 This extension took place from 161 Hj. through 165 Hj. and the mosque was extended in the northerly direction. The construction was supervised by Abdullah bin Asim bin Omar bin Abdul Aziz. During the ‘Abbasid period, the ruler al-Mahdi (775–785 CE) also enlarged al-Masjid al-Nabawi by extending it further to the north, adding 20 additional doors. Eight doors were added to the east and west walls while four were added to the north wall. 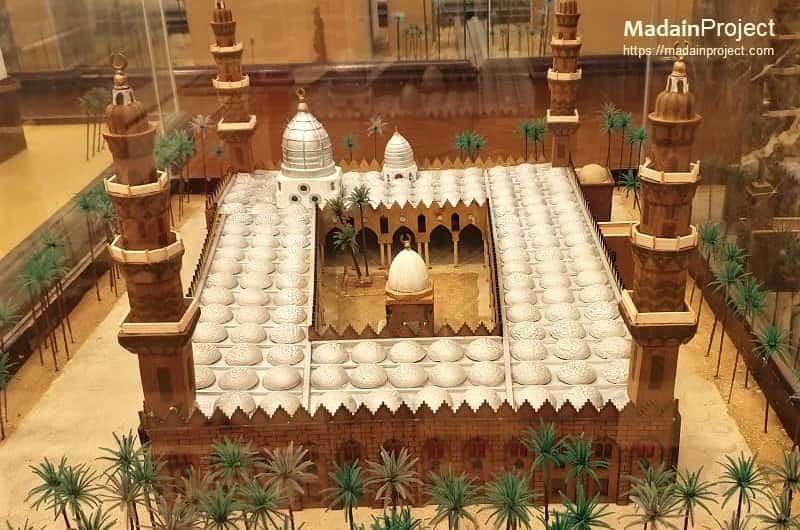 During the rule of the Mamluk Sultans, al-Mansur Qalawun built a dome over the tomb of the Prophet Muhammad in 1279 CE. This was the first time that a dome was erected. It was made of wood and was colorless. Later it was painted white and blue. In fact for a while, the dark blue color predominated, a favorite of the Arabs. Al-Mansur also built an ablution fountain outside of Bab al-Salam (Door of Peace). Another Mamluk Sultan, al-Nasir Muhammad, rebuilt the fourth minaret that had been destroyed earlier.

It was during the early Mamluk that the details about the furnishings were alse recorded with specifics. The earliest information on the furnishing of the Masjid al-Nabawi dates back to the Mamluk era. While at the beginning Indian carpets were used as prayer rugs, Anatolian carpets dominated later, particularly famous carpets of Usak, Gördes and Hereke.

Sultan ‘Abd al-Majid (1839–1861) remodeled the entire masjid, enlarging it extensively. He did not, however, touch the tomb of the Prophet (pbuh), the three mihrabs, the minbar and the Suleiymaniyyah minaret. The prayer hall to the south was doubled in width and covered with small equal sized domes. The only exceptions were the domes that cover the mihrab area, Bab al-Salam and the tomb of the noble Messenger (pbuh). Sultan ‘Abd al-Majid was so careful in the work he undertook that he had an entire generation of huffaz prepared from a very young age and trained by the best of craftsmen in the Islamic realm.

An aerial view of the mosque of first Saudi expansion. Shah Abdulaziz al-Saud issued commission for the first Saudi expansion of Masjid al-Nabawi, and in 1370 Hijri his son Shah Saud bin Abdulaziz laid the foundation stone. The whole project took about five years to complete and doubled the area of the earlier Ottoman mosque. By this time the pilgrims number continued to rise rapidly, as the number of pilgrims in year 1973 was about one hundred thousand, and in next 17 years it went up to one million. This expansion brought the total number of gates of Masjid al-Nabawi to 41 previous which was 11. During this renovation the carpets in the mosque, which were from the Ottoman era, were also replaced with standardized rugs. 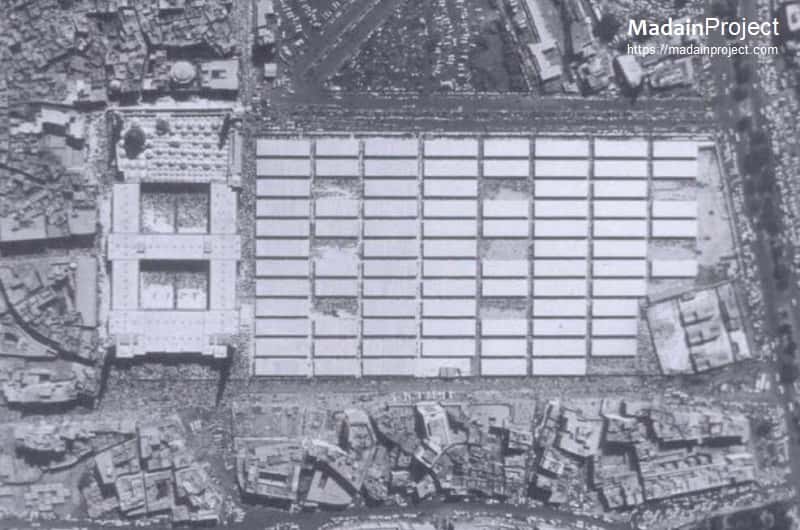 Shah Faisal commissioned the installation of shades, these semi-temporary shades were installed west of the mosque. These small roofs were installed in Masjid an-Nabawi as a temporary measure until a more permanent solution could be found. Due to ever increasing number of pilgrims to the Mosque of the Prophet, a very ambitious expansion project was launched under the auspices of al-Malik al-Fahad. It was the largest expansion of Masjid an-Nabawi and second expansion by the Saudis.

Fahad bin Abdulaziz Expansion, work on the Prophet’s Mosque in Madinah was launched by King Fahd in 1985 (1405/06 Hj.) and the Mosque could now accommodate in excess of one million worshippers at the busiest times. A unique feature of the expansion project was the development of the 27 main plazas. Each plaza is now capped by a state-of-the-art sliding dome, which can be rapidly opened or closed according to the weather.

During the second expansion, between 1984 and 1994 and named after the then King Fahd, six new minarets were added to bring their total number to 10. Six electric staircases were established raising the number of staircases to 24. 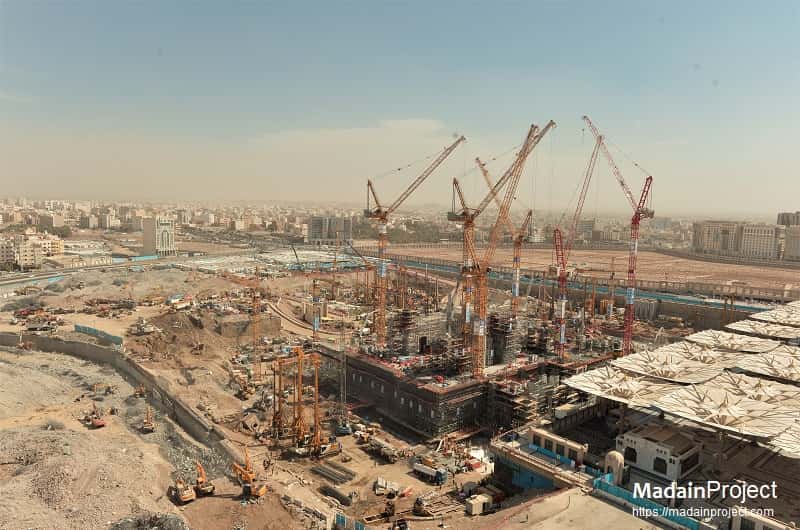 Malik 'Abdullah Expansion, will be the largest expansion in the history of the Prophet’s Mosque started in late 2012 CE (1433 Hj.), when King Abdullah laid the foundation stone to expand the mosque so it would be able to accommodate two million worshippers once the project was completed.