The Eastern Wall is an ancient structure in Jerusalem that is both part of the eastern side of the city wall of Jerusalem and the eastern wall of the ancient Temple Mount.

The Eastern Wall is the oldest of the four visible walls of the Temple Mount; the Northern, Western and Southern Walls date from the period of Herod the Great, who expanded the area of the Temple Mount to the north, west and south. Repairs and major renovations were made in later periods. Major renovations to the Golden Gate were made in the Umayyad period. There is a Muslim cemetery, the Bab al-Rehmah Cemetery, along the southern stretch of the Eastern Wall.

The Eastern Wall now visible was built in at least four stages, during the reign of Hezekiah, during the time of Zerubbabel, in the Hasmonean period, in the Herodian period and lastly during the reign of Suleiman the Magnificient. The masonry markers of Temple Mount's expansions are more distinctly visible near the southern end of the eastern wall. Notable features of the eastern wall include, remains of a Herodian arch, walled up twin gate, straight joint, Iron Age wall remains near the Golden Gate, south-eastern tower, and the as-Sirat Marker. 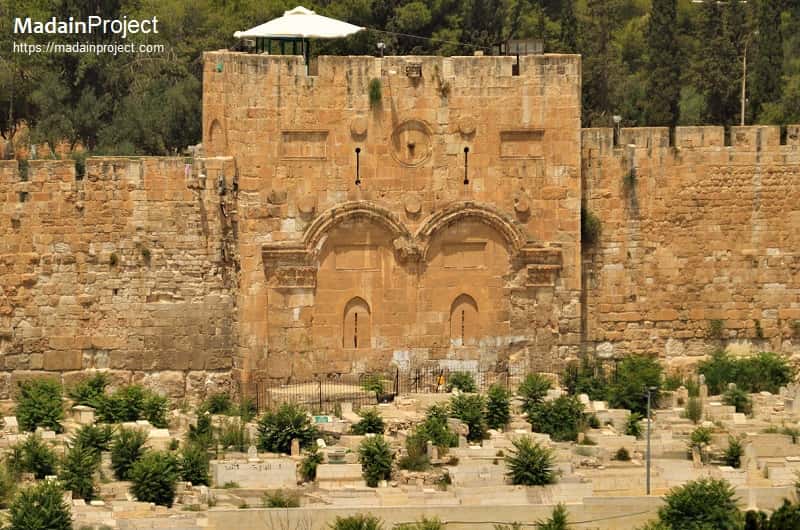 The Golden Gate, or the Bab al-Rehma (Gate of Mercy), is the most notable and important feature of the eastern wall of the Temple Mount. It may have been built on the site of first century Shushan Gate of Herod's Temple. According to Jewish tradition, the Shekhinah (Divine Presence) used to appear through the eastern Gate, and will appear again when the Anointed One (Messiah) comes. In Christian apocryphal texts, the gate was the scene of the meeting between the parents of Mary after Saint Joseph's first dream.

as-Sirat Bridge Marker, was most likely installed during the first reconstruction of the Temple Mount's walls by Muslims. It is believed to be the location where the earthly end of the as-Sirat bridge will be hung. It was moved up wards during various reconstructions of the eastern wall by Muslims, and was installed in its current place by Suleiman the Magnificient, when he rebuilt the walls, circa 1530 CE. The point where the Hasmonean and Hezekiahan walls join is approx 3 meters to the north of this marker.

Remains of an arch's spring (inspect) can still be seen near, where the Hasmonean and Herodian expansions meet. A twin gate was possibly located over the arched path way, an eastern arched gate at the top of a stairway. It can be thought of as the eastern wall’s version of Robinson's arch found in the western wall near the southern corner. A little to the south of this arch spring, remains of a possible tower, now integrated in to the Herodian masonry can be easily distinguished.

The Cradle of Jesus is located in the south-eastern corner of the Temple Mount. From the outside, a tall narrow window marks the small chamber, also known as the Oratory of our Lady Mary. Today inside an enclosed chamber, this would area would have been inside the 'Royal Stoa' of the Second Temple. Originally a fortification tower might have stood at this place.

The Hasmonean dynasty expanded the 500 cubit Temple platform toward the south; distinctively Hasmonean ashlars (inspect) are visible in the Eastern Wall. The Hasmonean stones were clearly built as a corner, since the corner edge was worn off and chipped before it was enclosed into the wall in 19 BCE. The seam (inspect) between the Hasmonean and Herodian extensions of the wall is visible as a vertical row of ashlars 32 meters north of the southeast corner. 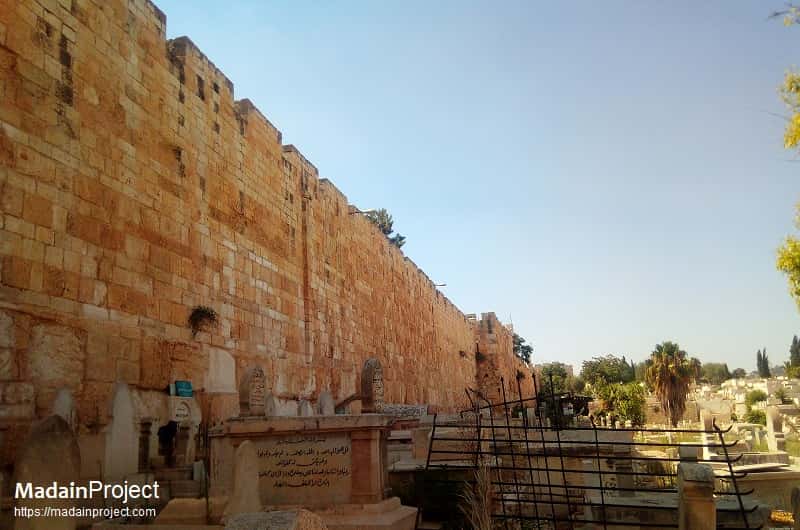