The western set of the Huldah Gates is a double arched gate (the Double Gate). The eastern portal of the double gate is now walled up and constitutes the qibla wall of Masjid Aqsa al-Qadimi (المسجد الاقصى القديم), the western portal although open it allows entry in to a Fatimid era fortification tower's base, where recently a library was established.

Each arch of the double gate led into an aisle of a passageway leading from the gate into the Mount, and to steps leading to the Mount's surface; when the al-Aqsa Mosque was built, the old steps were blocked, and the eastern aisle lengthened so that new steps from its end would exit north of the Mosque. Today only the lintel of the eastern portal is partially visible. To the left is the wall of either Fatimid or Saladin era fortification installation, now containing al-Khataniyya Library.

Interior
Interior of the Double Gate, looking northwards, this is the view a person might have had encountered after entering the double gate from the southern steps. From here two passageways lead the pilgrim to the Temple Mount, today this area is designated as al-Aqsa al-Qadeemi. During the buidling of the recent expansions of al-Aqsa (circa 1700 CE) the western passage (left with stairs) was blocked and the eastern (right behind the pillar) was extended to exit in front of al-Aqsa.

Interior of the Double Gate, looking southwards, the portal to the left is blocked and a small mehrab points the direction of the qibla. During the 1996 renovations of the area, the ancient pillars, three remaining from the time Herod, were reinforced with concrete casings with originals left intact, and the floor was raised. This area also has a small chamber in the western wall with an underground water reservoir. 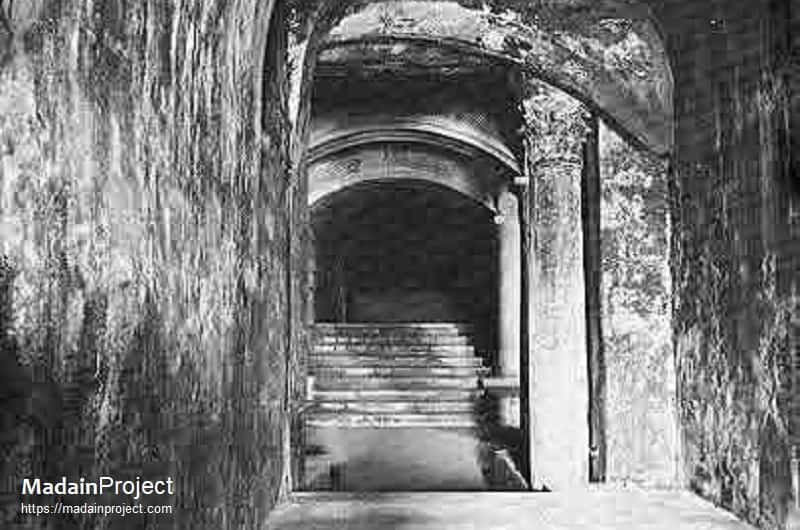 Eastern Portal
The eastern portal of the double gate from south circa 1800 CE. The 19th century excavations of the area by Charles Warren discovered these erratic series of passageways under the double and triple gate, some leading below the wall and beyond the Mount's southern edge. The age of these passages are unknown, and more recent archaeologists have not been allowed to investigate due to the political volatility of the site. The passageways from both gates are now used by the waqf as mosques.

Western Portal
The western portal of the double hulda gate, is the entrance to the Fatimid tower where now the Library al-Khatuniyya is located. Probably established by Salahuddin al-Ayubi and has remained in use ever since. From the Umayyad period onwards for sometime this portal was known as the Bab al-Nabi (Door of the Prophet).

Inner Domes
The decorated domes of the double gate, now al-Aqsa al-Qadim. There is uncertainity among archaeologists and historians about the dating of these domes, opinions put them somewhere from the Herodian era to the Abbasid pariod. The roof of the vestibule inside the Double Gate is topped with two pairs of domes supported by these columns. The column itself and two more flanking the steps are Herodian, the domes though seem to be from an early seventh-century (Early Muslim) reconstruction.

Eastern Passage
The eastern passageway of the double gate as seen from the northern entrance which is located in front of al-Aqsa Masjid. This passageway has two portals to leading in to the western passageway, which allows access to the southern chapel and Maktaba al-Khataniyya.

Depiction of Huldah Gates in the Holyland Model
Huldah Gates in the southern wall of the Temple Mount Model with Tomb of Huldah in the foreground (small cube wih triabgular top). The model depicts both gates with twin portals, as in 1970s the information available about the gates was not accurate, until further excavations during the recents decads, provided more details.