Dome of the Rock
The Dome of Rock, an Islamic shrine, is situated on the pinnacle of Mount Moriah. Initially built on the orders of Umayyad Khalif Abdul-Malik ibn Marwan in 691 (72 year according to Muslim calendar), and named it after 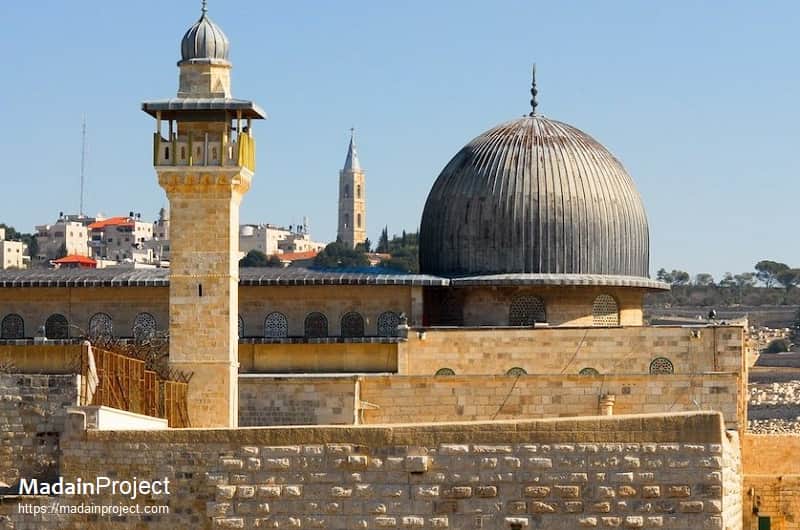 Dome of Masjid al-Aqsa
Dome of al-Aqsa is the lead sheeted dome over al-Aqsa mosque. Nothing remains of the original dome built by Abd al-Malik. The present-day dome was built by az-Zahir and consists of wood plated with lead enamelwork. Al-Aqsa's dome is one of the few domes to be built in front of the mihrab during the Umayyad and Abbasid periods. The interior of the dome is painted with 14th-century-era decorations. Beneath the dome is the Al-Qibli Chapel. The drum of the dome and the walls immediately beneath it are decorated with mosaics and marble.

Dome of the Chain
According to a tradition the Dome of the Chain stands where prophet Suleyman suspended a chain, which helped people to settle disputes, as the righteous approached he could take hold of it and the unjust found it out of reach. One of the oldest structures on the Haram ash-Sharif, it is not a mosque or shrine, but is used as a prayer house. It is a free-standing dome located adjacently east of the Dome of the Rock inside the Haram al-Sharif complex.

Dome of the Prophet
The Dome of the prophet is believed to be situated where according to a tradition Muhammad led the prophets and angels in prayer on the night of Isra and Mir'aj before ascending to Heaven. Endowment documents from the Ottoman period indicate that a portion of the endowment of the al-Aqsa Mosque was dedicated to maintain the lighting of an oil-lamp in the Dome of the Prophet each night. It was originally built in 1538 by Muhammad Bey, Ottoman Governor of Jerusalem. 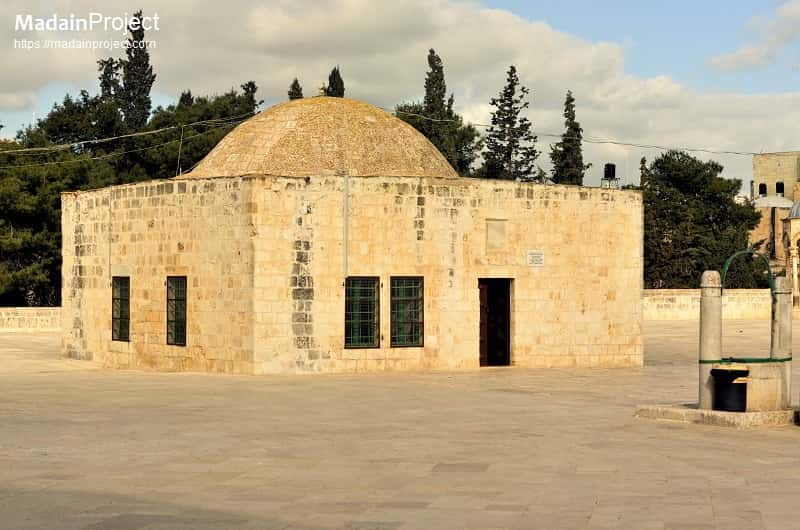 Dome of al-Khalili
The Dome of al-Khalili (قبة الخليلي) or the Hebronite is a small domed-building located in the central platform of the Haram al-Sharif, north of the Dome of the Rock in the Old City of Jerusalem. The dome was built in the early 18th century during Ottoman rule of Palestine in dedication to a shaykh named Muhammad al-Khalili. The building is made of bricks which are currently tarnished.

Dome of Khidr
The Dome of Khidr, is a free standing dome located near the north-western edge of the Mastaba. Originally built in the tenth century CE it was extensively renovated during Ottoman era in the sixteenth century. According to tradition it is built on the spot where prophet Khidr used to pray and worship God, hence the name Qubat ul-Khidr. Beneath the structure, there is a rectangular hall (Zawiyat al-Khadr) that is covered by a barrel vault and is at the level of the Haram esplanade. A simple mihrab with a semicircular head is cut into the southern wall of the vault.

Dome of Spirits
The Dome of Spirits (Qubat ul-Arvah) or the Dome of the Tablets, is located in the north-west corner of Haram al-Sharif (Temple Mount). It is suggested (by Asher Kaufman) that the location of the dome is where the Holy of Holies (Qodes Haq Qodasim) of the Second Temple was located. According to the Mishnah, the High Priest stood on the Mount of Olives, and while looking towards the Holy of Holies (as it is in a direct east/west line from the peak of the Mount of Olives through the Eastern Gate to the Temple Mount), he would sacrifice the Red Heifer and sprinkle the blood in its direction.

Dome of Yusuf Salah al-Din
The Dome of Yusuf (Qubat Yusuf), it was built by Yusuf Saladin, in the late 12th century, and has been renovated several times. It bears inscriptions from the 12th and 17th centuries. A rectangular semi-enclosed structure, the Dome of Yusuf sits upon a solid stone wall and is supported by three pointed open arches. On the northern face of the southern wall, there are stone carvings and a marble-faced blind-niche. The exterior of the dome is covered in lead sheeting and the interior is decorated with a ribbed pattern.

Dome of the Prophets' Lovers
Built by Sultan Mahmud II, the Iwan of Sultan Mahmud II, or most commonly known as the Dome of Lovers of Prophet or Dome of Suleyman Pasha it is located to the south-east of King Faisal Gate and north of the Qubat ul-Sakhara (Dome of the Rock). It is the last Ottoman commemorative building to be erected in the Haram area by an Ottoman sultan after Sultan Sulayman's grand projects of the 16th century. The iwan is a simple stone structure, with a square plan. The basin of Sebil e Bab ul-Attim is also visible in the lower left corner.

Dome of the Ascension
The Dome of Ascension (Qubat ul-M'araj), constructed to commemorate the prophet Muhammad's ascension to heaven (Miraj) according to Islamic tradition. It is understood by scholars as having been built as part of the Christian Templum Domini, probably as a baptistry. An Arabic inscription dated it to 1200-1 CE describes it as rededicated as a waqf. The structure and, notably, the column capitals are of Frankish style and construction, but some repair or renovation was done in or after the Ayyubid dynasty period.

Dome of Solomon
The Dome of Solomon (Qubat Suleyman), the Guide to the Holy Places (1470 CE) states that this structure belonged to Suleyman ibn abd-ul Malik, the seventh caliph of the Umayyad dynasty (715-717 CE) but the current building dates back to c. 1200 CE Ayyubid period. The structure served several purposes including a record-house for courts, al-Aqsa and department of Awqaf.

Dome of al-Nahawiya
The Dome of al-Nahawiya (Qubat ul-Nahawiya), is an official office and it under responsibility of the Office of Religious Endowments. Located at the southwestern end opposite the Chain Gate. Established by King Sharaf al-Din Abu al-Mansur Issa al-Ayyubi in 1207 CE as a specialized shool of al-Nahaw (linguistics/grammer) it was converted in to a library during British occupation. 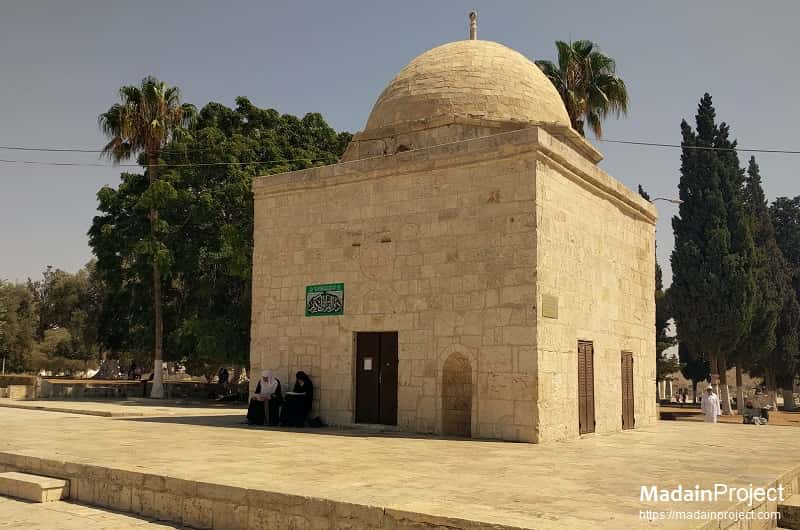 Dome of Emir Musa
The Dome of Emir Musa, also known as the Dome of the Tree (Qubat ul-Shajarah), it was built by King al-Salih Najmuddin Ayoub in 1249 CE to be used by people for worship. It is named after one of the most notable Sheikhs who was incharge of the establishment (waqf). It may have served as a mosque as well, it is located near the Chain Gate in the western wall of the Temple Mount. 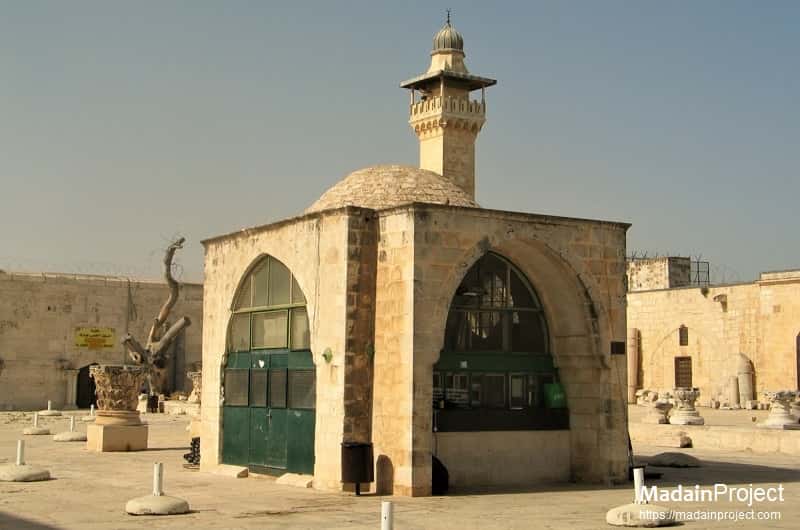 Dome of Yusuf Agha
Located between al-Aqsa and Moroccan's Mosque (Islamic Museum) Dome of Yusuf Agha (Qubat Yusuf Agha), it is named after its founder Yusuf Agha who is thought to have been the Governor of Jerusalem. Today it functions as an information desk for the visitors of al-Aqsa compound. It is a square building built on top of a square platform known as Mastaba-e Musa. 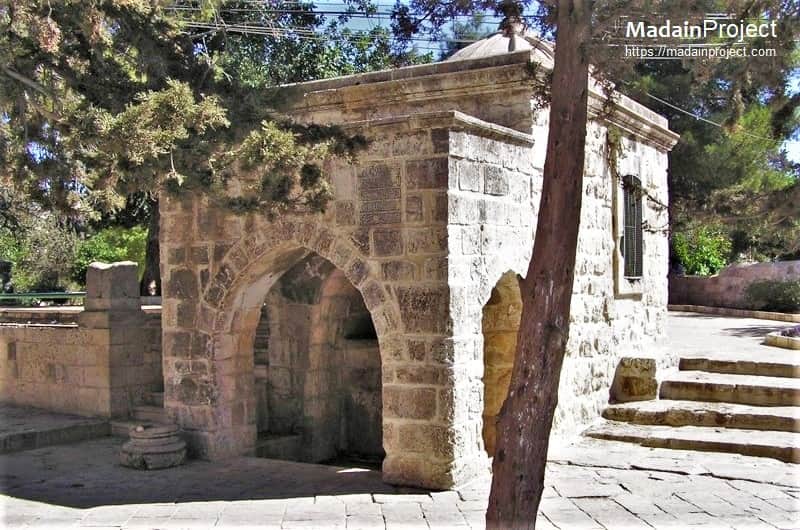 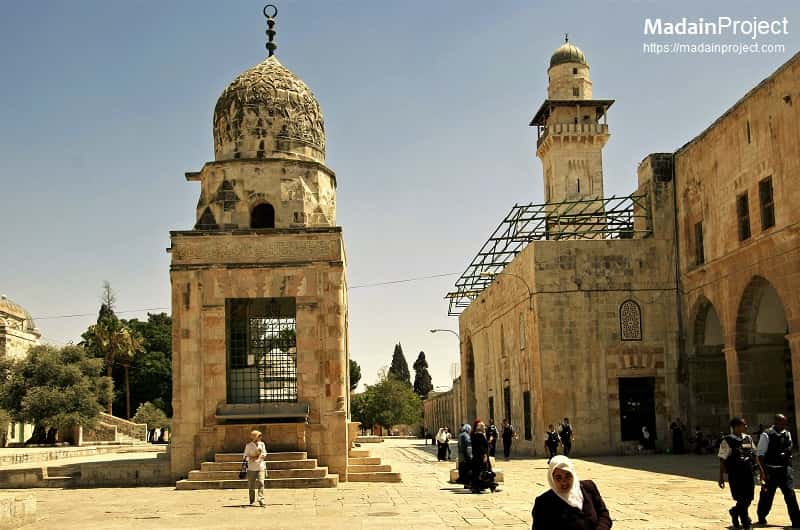 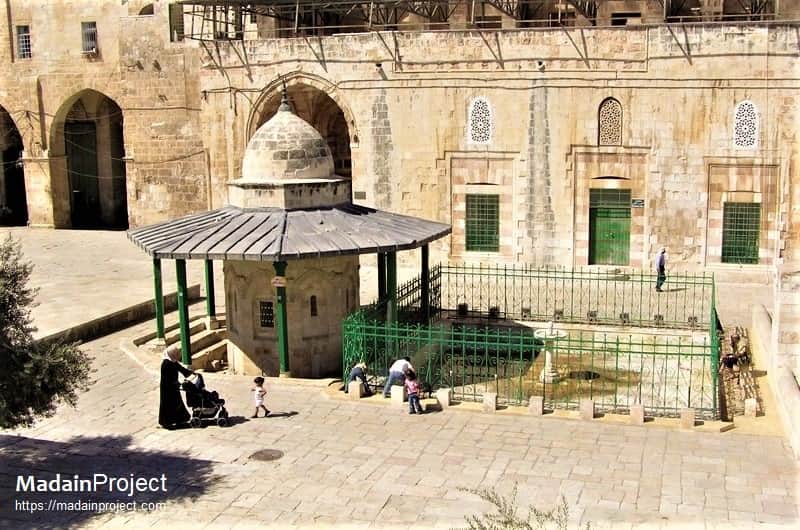 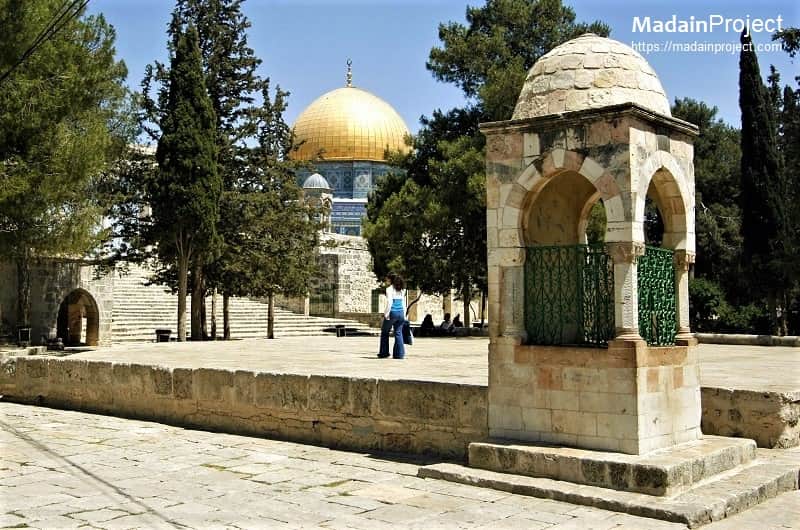