Dendera Temple complex (Ancient Egyptian: Iunet or Tantere; the 19th-century English spelling in most sources, including Belzoni, was Tentyra; also spelled Denderah) is located about 2.5 kilometres (1.6 mi) south-east of Dendera, Egypt. Dendera is located about 60 kilometers north of Luxor on the west bank of the Nile River. It is one of the best-preserved temple complexes in Egypt. The area was used as the sixth Nome of Upper Egypt, south of Abydos. 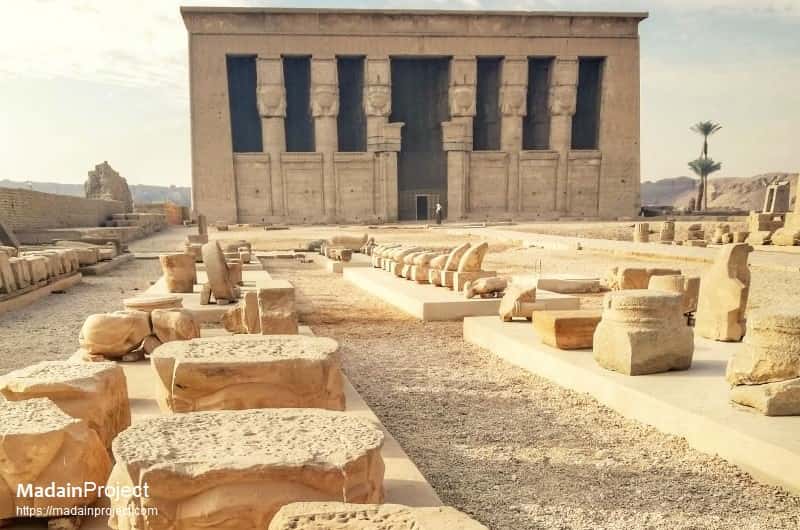 The whole complex covers some 40,000 square meters and is surrounded by a hefty mudbrick enclosed wall. Dendera was inhabited in prehistory, a useful oasis on the banks of the Nile. It seems that pharaoh Pepi I (ca. 2250 BCE) built on this site and evidence exists of a temple in the Eighteenth Dynasty (ca 1500 BCE). The earliest extant building in the compound today is the Mammisi raised by Nectanebo II – last of the native pharaohs (360–343 BCE). 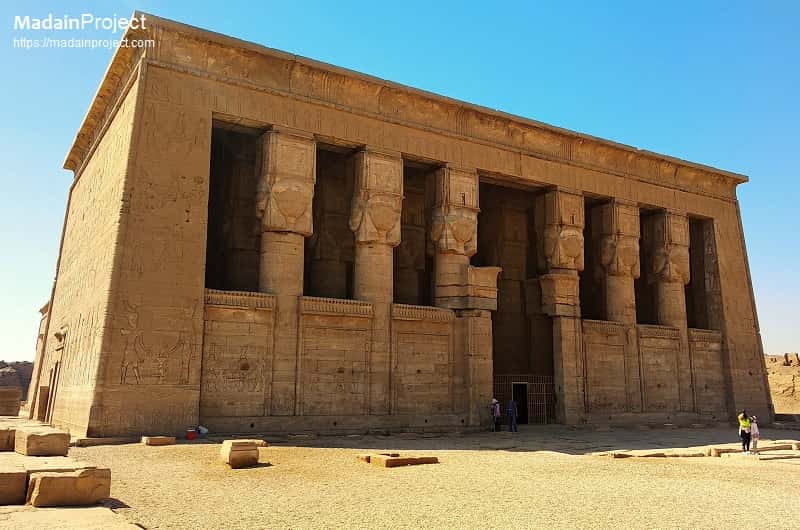 The Temple of Hathor is the dominant building in the complex. The temple has been modified on the same site starting as far back as the Middle Kingdom, and continuing right up until the time of the Roman emperor Trajan. The existing structure began construction in the late Ptolemaic period, and the hypostyle hall (inspect) was built in the Roman period under Tiberius. 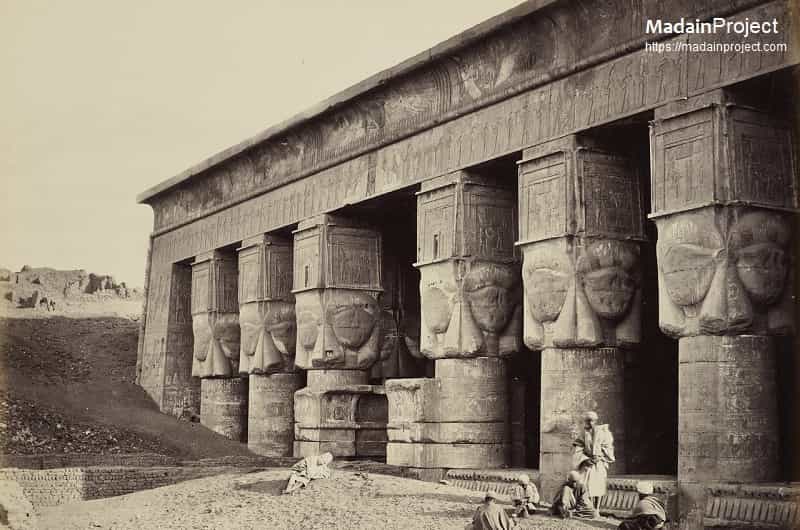 In ancient times, Dendera was associated with healing. Patients who traveled there for cures were housed in special buildings where they could rest, sleep, and commune with the gods in their dreams. There is something else special about this temple, as well: It bears the name of Cleopatra and her son, whose father was Julius Caesar.

The mammisi in Dendera dedicated to Ihy, is the last of its kind to be built. It was built not before than the external wall had been constructed blocking the entrance to the previous birth chapel,. Although, the dedicatory inscription is dated to the reign of Trajan, the building was started probably earlier, in the reign of Nero, what relief scenes from the pronaos indicate to.

The Sanctuary of Isis forms an independent religious ensemble of the great temple with its own brick enclosure, its well and its monumental gate to the east. On the latter is engraved a Greek inscription of 23 September in the year 1 CE 31 th year of the reign of Augustus, the name of which is decorated with the small temple. This one is not in the axis of the door but in that of the big temple. The Temple proper is made up of a vestibule opening on three chapels which bear the same archaic resonance designations as the three chapels of the Temple of Hathor (per-ur, per-nou and per-neser). 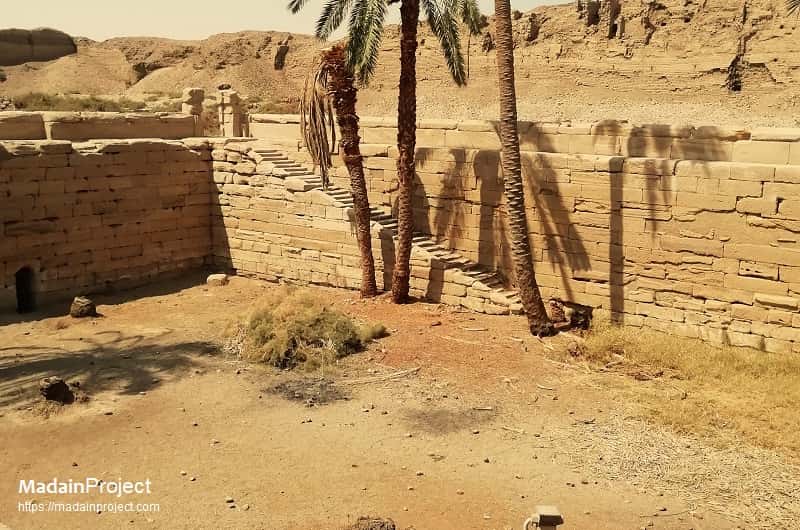 This sacred lake is one of the best preserved in Egypt and would have provided priests with both sacred water for their rituals and every day uses as well.

Roman era entrance to the Dendera Temple complex is the monumental gateway of Domitian and Trajan is set in a massive mud-brick enclosure wall that surrounded the complex, and leads to an open area.

Between the new and old birth houses are the remains of a Coptic Christian basilica that can be dated to the 5th century CE. It is an excellent example representative of early Coptic church architecture.

On the roof in the southwest corner is a small kiosk dedicated to Hathor, in which the ritual of the goddess's union with the sun disk was performed. It has four Hathor columns on each side. Sockets in its architraves suggest a barrel-shaped timber roof with a double hull and segmented pediment, though for its purpose it must have had roof windows to let in the sun's rays. In the floor of the chapel one may also note the light well for the Horus chapel below, on the main floor.

South of the earlier birth house (mammisi) of Nectanebo is a mud-brick "sanatorium". This sanatorium is the only one of its type known in association with an ancient Egyptian temple. Here, visitors could bathe in the sacred waters or spend the night in order to have a healing dream of the goddess. It had benches around its sides where the sick rested while waiting for cures affected by the priests. An inscription on a statue base found in this location suggests that water was poured over magical texts on the statues, causing it to become holy and to cure all sorts of diseases and illnesses. Basins used to collect the holy water can still be seen at the western end.