The Monastery of the Sultan (Arabic: دير السلطان‎, translit. Deir Al-Sultan, lit. 'Monastery of the Sultan') is a monastery located on the roof of the Church of the Holy Sepulchre in Jerusalem. The Status Quo, a 250-year old understanding between religious communities, applies to the site.

The chambers of the Ethiopian Monastery in the foreground with the Rotunda in the background. The monastery area is about 1800 meters. Salah al-Din handed over the monastery to the Copts after the conquest of Jerusalem, since then the monastery in known as Deir as-Sultan. The Monastery of Sultan (Deir al-Sultan) is important for Copts for another reason as it allows direct access to the Egyptian Patriarchate located beside the Holy Sepulchre.

There has been a church on this site for 1,700 years. Over the centuries it has been destroyed and rebuilt several times - but some parts are very old indeed. Within the main building, dark-robed monks with long beards chant and swing incense as they conduct ceremonies in the many small chapels and shrines. Various Christian denominations - Greek Orthodox, Armenians, Catholics, among others - have always jealously defended and protected their own particular parts of the site.

Although the Ethiopian monks have lived there for more than 200 years, after losing many of their rights within the main church, the Copts were in overall control of the monastery. That's certainly how the Coptic Church interprets the "Status Quo" - the 1852 decree, issued by the then-Ottoman rulers of Jerusalem, to put an end to the arguments among the church's various claimants. The Ethiopian Church has a different view, saying that they have had a presence on the roof-top for even longer and that the question of the monastery's "ownership" has never been properly defined.

Leading off the courtyard is a small chapel where the monks worship. The chapel is dedicated to Saint Michael the Archangel. It is not an impressive structure. A small oblong building, it is capable of seating about 70, with room for a further 40-50 to stand packed together at the times of the great festivals. t is noteworthy that there is a historical dispute over the ownership of this monastery between Copts and Ethiopians.

Around the sides of the courtyard are old and shattered walls with a group of low mud huts huddled together, with the bell tower of Church of Redeemer in the background. A recent survey says that part of the complex, a rooftop monastery, is in urgent need of repair, but work is being held up by a long-running dispute between two Christian sects who claim ownership of the site.

The modest collection of small rooms has been occupied by monks from the Ethiopian Orthodox Church since 1808. But a recent engineering report by an Israeli institute found that the monastery and part of the roof were "not in a good condition" and that parts of the structure "could collapse, endangering human life". Ownership of the monastery, however, is hotly disputed between the Ethiopians and the Egyptian Coptic Church, and the dispute is holding up much-needed repair work. 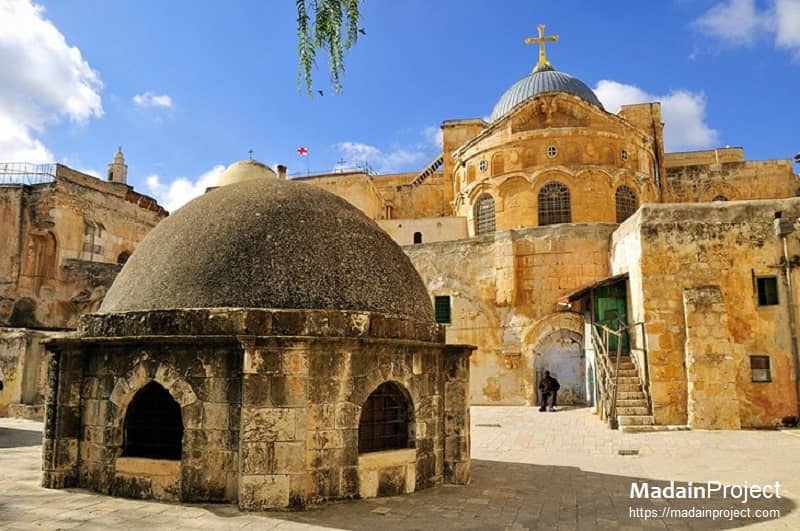 The dome is located in the rood atop the Saint Helena Chapel, one of the most ancient parts of the complex which make up the most sacred of Christian sites in Jerusalem. In the southwest corner of this square are two historical churches: the Church of the Four Spiritual Beasts (the four animals) with an area of ​​42 m 2 and the Church of the Angel Michael in the ground floor with an area of ​​35 square meters.

The Ethiopian community has been residing in Jerusalem for the last two millennia, dating back to the 4th century CE Till the 16th century Ethiopians in Jerusalem owned four chapels in the Church of the Holy Sepulcher. These were Chapel of Our Lady and of St. John the Evangelist, Chapel of St. Michael, Chapel of St. John the Baptist, and Chapel of St. Mary Magdalene. However, they lost all these chapels due to the lack of aid from the Ethiopian Emperors. From the written documents of French pilgrim Charles Philippe de Champermony we come to know about the Ethiopian's presence in Debre Sultan.

The fountain in the monastery courtyard. In 1850, however, again the Ethiopians got the keys to the monastery, though the Copts kept the chapels of St Michael and the chapel of the Four Creatures permanently locked for 80 years from the year 1862. Therefore the Ethiopians were forced to erect a huge tent for celebrating various festivals and this tradition is still followed.