Mutahaf Dar al-Madinah (متحف دار المدينة) is a privatly owned and run museum in Medina. It is owned by Abdul-Aziz bin Abdul-Rahman bin Ibrahim Kaki. The museum focuses on the history of al-Madinah City, in particular The Hijrah Road and the Hijrah related historical incidents. The museum houses very few historical artefacts, most of it's exhibits are modern models or pictures from different periods of Medina's history. The museum is mostly focused on the history of Medina and its role during the post-Hijrah Muslim period. The museum exhibits around 2,000 exhibits that capture the heritage and culture of al-Madinah and document the landscape, the people and how it has been shaped over the years.

The exhibitions at the Dar al-Madinah Museum, include collection of visual galleries and rare photographs regarding the heritage and history of the city of al-Madinah featuring different eras. The most notable piece in the museum is a bow affiliated to Saad Ibn Abi-Waqas, a famous archer in Islam and one of the Prophet Muhammad’s companion.

Dar al-Madinah Museum has an exhibition on the history of Masjid al-Nabawi, depicting different eras over the years. The exhibition provides a visual aid for understanding how the Prophet's mosque has changed over the course of history, starting with the first construction of the Masjid an-Nabawi during the time of prophet Muhammad, ending with the Second Saudi Expansion.

A model of the Haram al-Sharif is also part of the museum's historic exhibitions. The model illustrates, although not quite accurate and with some major elements missing, the Masjid al-Aqsa complex in some detail with Dome of Rock in the center and Masjid al-Aqsa partially visible to the left. 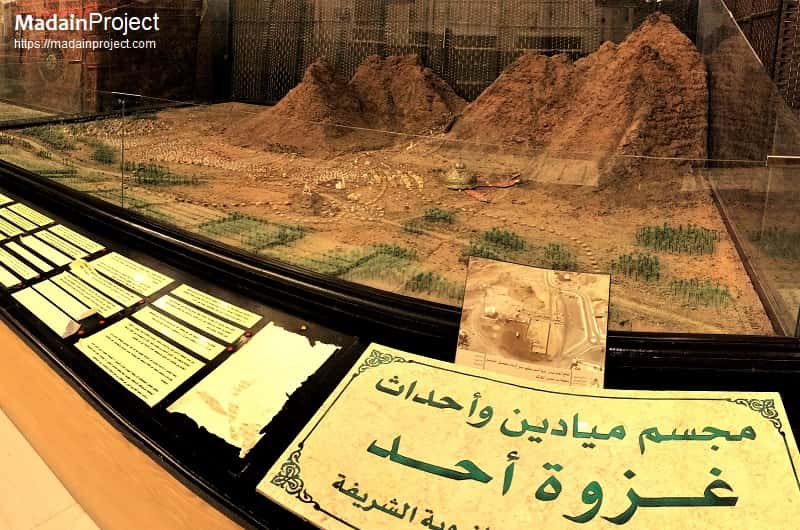