The Israelite altar at Tel Dan was a four horned, sacrificial stone-altar, most recently installed by the Israelite king Jeroboam II. Following the division of the kingdom of Solomon in 930 BCE, Jeroboam son of Nebat established a cult at Dan as an alternative to the one at the Temple in Jerusalem. He placed a golden calf in the city and built a house of high places. In the Hellenistic period, the cultic precinct was surrounded by a wall that is visible to this day. A bilingual (Greek-Aramaic) inscription found at this site attests to the usage of this place.

The remains of the current altar date back to the third phase of development during the reign of Jeroboam II (circa 760 BCE). Archaeologists found only parts of the altar, including one of the horns that protruded from the four corners and part of the steps leading to it. The Sacred Area or temenos at Dan is a large complex over a half-acre in size. The central open-air altar-platform of the Sacred Area went through three phases during the Israelite period.

Biran has identified the three phases of construction starting in early ninth century BCE and ending with King Jeroboam II, around 930 BCE. It is clear that this entire area at Tel Dan was an important Israelite cultic center. Whether it is the beth bamoth referred to in 1 Kings 12:31, as Biran believes, is a matter of debate among archaeologists and academics.

While it is clear Jeroboam set up an altar at Bethel and Dan, most Bible students fail to realize that he inherited and modified the pagan altar at Dan that had functioned for 420 continuous years before him. The archeology at tel Dan (Laish) provides us with an incredible window into the ancient pagan history of the tribe of Dan in 1350 BCE and Jeroboam in 930 BCE.

Stairs
Due to its height, the top of the altar would have been accessed by two intact staircases understood by the excavators to have been added in Stratum II (Biran 1994a, 205). The orientations of these staircases – one facing the entrance and the other facing the right-hand side of the precinct (see Biran 1994a, 205, Fig. 163) – illustrate a second point of correspondence between the altar and Israelite religion as represented in the priestly texts of the Hebrew Bible in that the staircases may be lined up with the directions of movement outlined for priests in their altar service of the burnt offering: priests went up on the altar from the right side to arrange and burn the carcass after slaughtering the victim (Lev 1:5.11; 4:4; 15:24), then they would descended toward the entrance to deposit the ashes (Lev 1:16; 6:3).

Three architectural features of the central altar mentioned above also exhibit characteristics congruent with Israelite worship as may be deduced from biblical texts and archaeological remains from other sites. The first is the large horn typical of Israelite altars, though not exclusively so (Gitin 2002). 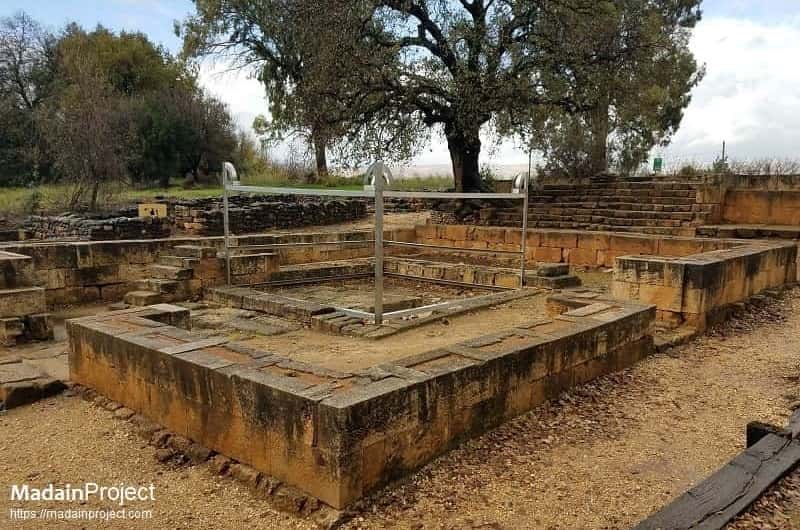 What is perhaps most striking about this congruence is that later biblical and extrabiblical descriptions of the main altar of the temple in Jerusalem only mention one staircase or ramp from either the left-hand side or from the entrance, thus it would seem that our altar from Dan – one of the earliest monumental altars of the Israelite type – bears the closest affinity with biblical priestly prescriptions.

The round reservoir near the wall of the altar, and the external wall on the south side of the ritual place, were constructed during the Hellenistic period. Animal bones were found near the reservoir, the remains of animal sacrifice. This attests to the continued practice during those times. This is a common practice in many sites – the ancient holy places were reused for hundreds of years and by different religions.