Court of the Lions

It was commissioned by the Nasrid sultan Muhammed V of the Emirate of Granada in al-Andalus. Its construction started in the second period of his reign, between 1362 and 1391 CE. The site is now part of the UNESCO World Heritage List and was minted in Spain's 2011 limited edition of 2€ Commemorative Coins. The structure of the courtyard, has, as it has been said, a direct influence of the Sevillian Patio de las Doncellas, but its meaning and origins trace their roots to early Islamic gardening, the courtyard divided in four parts, each one of them symbolizing one of the four parts of the world. Each part is irrigated by a water channel that symbolize the four rivers of Paradise. This courtyard is, therefore, an architectural materialization of Paradise, where the gardens, the water, and the columns form a conceptual and physical unity. The slender column forest have been said to represent the palm trees of an oasis in the desert, deeply related with Paradise in the Nasrid imagination. In the poem of Ibn Zamrak on the basin of the fountain, a further meaning is stated clearly: "The fountain is the Sultan, which smothers with his graces all his subjects and lands, as the water wets the gardens." 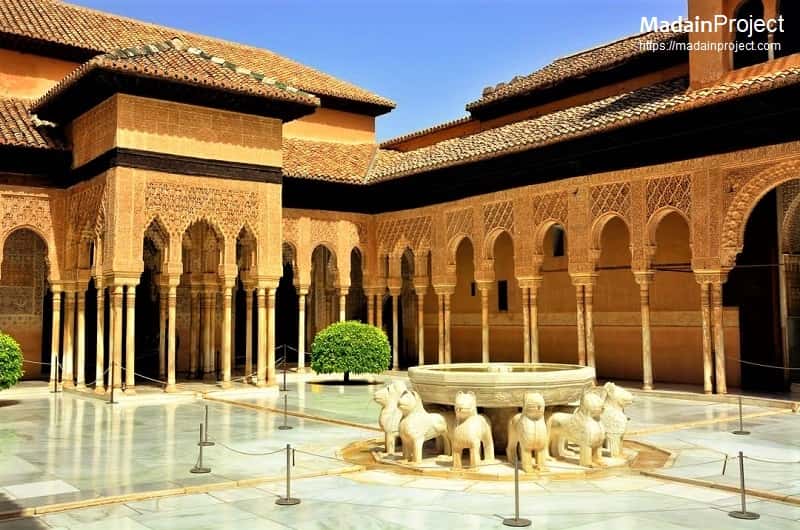 The Court had a cross ground floor design with a central fountain, following the same pattern as other earlier and later constructions used in Muslin Spain and elsewhere. The proportional and visual perfection of the surrounding arched gallery supported by columns converted this Court into one of the most celebrated and admired of architectural structures.

The Courtyard of the Lions is an oblong courtyard, 35 m in length and 20 meters in width, surrounded by a low gallery supported on 124 white marble columns. A pavilion projects into the courtyard at each extremity, with filigree walls and light domed roof, elaborately ornamented. The square is paved with coloured tiles, and the colonnade with white marble; while the walls are covered 1.5 meters up from the ground with blue and yellow tiles, with a border above and below enamelled blue and gold.

The architectural pattern of the Palace of the Lions was similar to that of the Palace of Comares, although with the traditional design of the Spanish-Moorish houses, i.e. a central open air courtyard as the centre of family life was flanked by a number of polyvalent rooms consisting of a ground floor and at least one upper floor or loft.