Chapel of Simon of Cyrene

The Chapel of Simon of Cyrene is a Catholic chapel belonging to the Franciscans in the Old City of Jerusalem. The place marks the fifth station of Via Dolorosa, and refers to the biblical episode in which Simon of Cyrene takes Jesus' cross, and carries it for him.

The current traditional site for the station is located at the east end of the western fraction of the Via Dolorosa, adjacent to the Chapel of Simon of Cyrene, a Franciscan construction built in 1895. An inscription, in the architrave of one of the Chapel doors, references the Synoptic events. The facade of the church has five points of interest i.e. the leaning stone (inspect), the lintel (inspect architrave), the station marker, seal of franciscans and the Via dolorosa sign.

Although this narrative is included in the three Synoptic Gospels, the Gospel of John does not mention Simon of Cyrene but instead emphasizes the portion of the journey during which Jesus carried the cross himself. “As they led him away they laid hold upon one Simon, a Cyrenian, coming out of the country, and on him they laid the cross that he might bear it after Jesus” (Luke, 23). At this site the Roman soldiers forced passersby to offer assistance to those who had been sentenced, as they began the final ascent towards the crucifixion hill.

The chapel belongs to the Franciscans, as indicated by the symbol on the building’s façade: The “Jerusalem cross” (inspect) consisting of one large cross with four smaller crosses in either corner, the cross that was adopted by the Franciscan order; and the symbol of the Franciscans depicting the crossed arms of Jesus and St. Francis of Assisi underneath a dove that symbolizes the Holy Spirit. Following tradition, between 6:00 and 8:00 a.m. on the morning of Holy Monday at the Fifth Station of the Way of the Cross, several Holy Masses in various languages are celebrated here, one after the other.

Prior to the 15th century, this location was instead considered to be the House of the Poor Man, and honoured as the fifth station for that reason; the name refers to the Lukan tale of Lazarus and Dives, this Lazarus being a beggar, and Dives being the Latin word for [one who is] Rich. Adjacent to the alleged House of the Poor Man is an arch over the road; the house on the arch was thought to be the corresponding House of the Rich Man. The houses in question, however, only date to the Middle Ages, and the narrative of Lazarus and Dives is now widely held to be a parable. 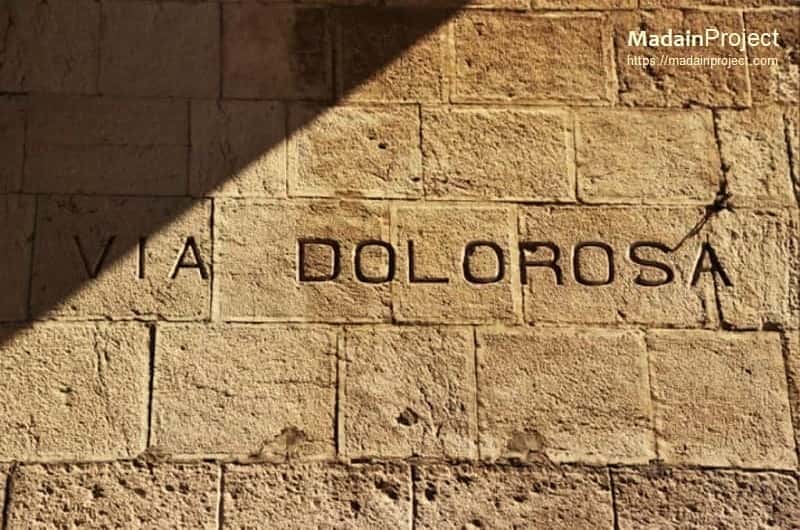 Via Dolorosa inscription under the Arch of Ecce Homo (originally built by Hadrian in 135 CE). The processional was is called by several names, most commonly known naes are "Way of Grief," "Way of Sorrow," "Way of Suffering" or simply "Painful Way". The following enlists the stations of the current Via Dolorosa, in sequence.