Originally the sanctuary had eight pillars, and was probably dedicated to goddess Mut. In the fourth century CE, the Roman imperial government, capitalizing on the site’s earlier significance, converted the temple into a military camp and constructed a lavishly painted cult chamber dedicated to the four emperors of the Tetrarchy.

The apse of the Roman sanctuary in the south-western wall, it was converted in to a church cira 300 CE after the Diocletian's persecution of Christians in Egypt. It was transformed, and an apse installed during the Era of the Martyrs along with a few other churches around the site. The small entrance in the apse (peek inside) leads to the offering hall of Alexander the Great. Adapted from a Pharaonic building of the time of Amenophis III the central hall that is described by all the leading authorities as a Christian church.

During the cultic period here was the process of the monumentalization of their architecture, probably connected with the increasing significance of the Roman Imperial Cult’s, which caused the appearance of some new architectural peculiarities like apse, rising of the chapel's floor level, and the appearance of the monumental entrances to the court, basilica and chapel. That is why the space of the chapel became more significant and more opened to the basilica and to the court. 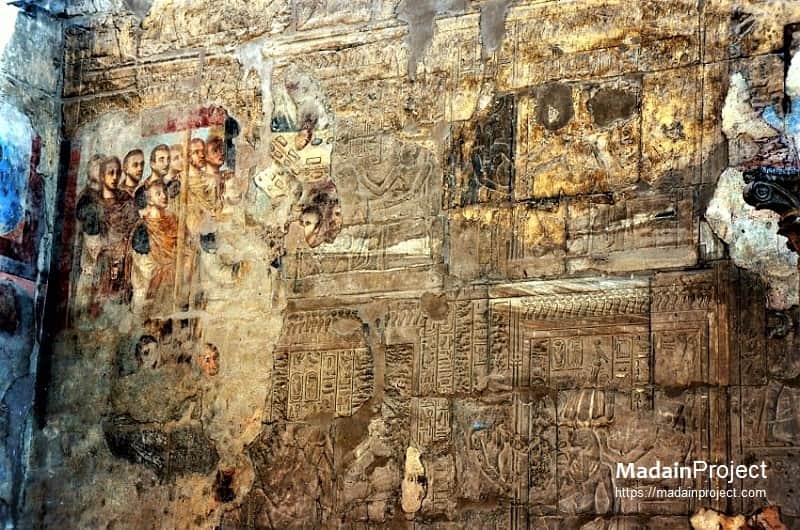 Roman fresco, to the south of the apse, in the sanctuary (inspect), recreated over the temple’s hieroglyphs, depicting the Roman soldiers who had occupied the site. These frescoes provide fascinating insight into the political landscape of the late Roman Empire and, as the only surviving wall paintings from the tetrarchic period, into the history of Roman art.

The date of the original building is given by the magnificent series of bas-reliefs on the walls, most of which have been revealed from beneath a thick coating of plaster, on the remaining parts of which can still be seen traces of late antique paintings. It is, in the main, these paintings that have attracted the attention of scholars, both of those who saw them immediately after excavation and of those who, since then, have deplored their almost total destruction at the hands of the Egyptologists, who stripped off the greater part of the stucco to reveal the underlying Egyptian sculpture.

The space of the ancient egyptian temple was very useful for creating the principia. It included the court, the hypostyle hall which probably became the basilica, the chapel of the Roman Imperial Cult and additional chambers, which had been pharaonic chapels before (el-Saghir et al. 1986. P. 31). In the main chamber of the chapel there were paintings which were not preserved, hHowever because of sir John Wilkinson’s watercolours painted in the middle of the nineteenth century, scholars studied them a lot and J. Deckers did their reconstruction.

The Luxor Temple, where the Roman sanctuary of Imperial Cult is located, was constructed over hundreds of years by Amenhotep III, Ramses II, Tutankhamun, and other pharaohs, Luxor Temple was the largest and most significant religious center in ancient Egypt. In what was then Thebes, Luxor Temple was “the place of the First Occasion,” where the god Amon experienced rebirth during the pharaoh’s annually reenacted coronation ceremony.