Cardo Maximus of Jerusalem was the main north-south thoroughfare built by Hadrian in Aelia Capitolina (Roman name for the region of Israel/Palestine). The Cardo Maximus, was originally a paved avenue approximately 22.5 meters wide (roughly the width of a six lane highway) which ran southward from the site of the Damascus gate, terminating at an unknown point.

The cardo was originally a paved avenue approximately 22.5 meters wide (roughly the width of a six lane highway) which ran southward from the site of the Damascus gate, terminating at an unknown point. An illustration of how this main street might have looked in Roman-Byzantine times. The southern addition to the Cardo, constructed under Justinian in the 6th century CE, extended the road further south to connect the Church of the Holy Sepulchre with the newly built Zion Gate. 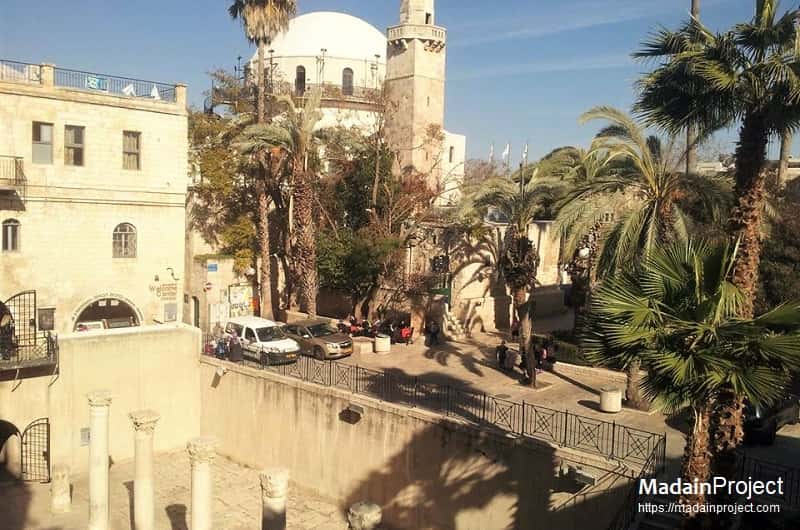 The line of the Cardo Maximus is still visible on the Jewish Quarter Street, though the original pavement lies several meters below the modern street level. In the 7th century, when Jerusalem fell under Muslim rule, the Cardo became an Arab-style marketplace. Remains of the Byzantine Cardo were found in the Jewish Quarter excavations beginning in 1969. The minaret of Caliph Omar Mosque and the Hurva Synagogue as seen from across the southern section of Roman Cardo.

Corinthian Columns
There are only five full columns standing to their original and one to partial height. Situated in the heart of the Jewish Quarter the exposed length of this section is about 150 meters and some 2.5 meters below modern street level. Simple bases (inspect) supported monolithic shafts, spaced 5.77 meters apart. The shafts supported Byzantine-style Corinthian capitals – intricately carved (inspect), but more stylized versions of their Classical counterparts. 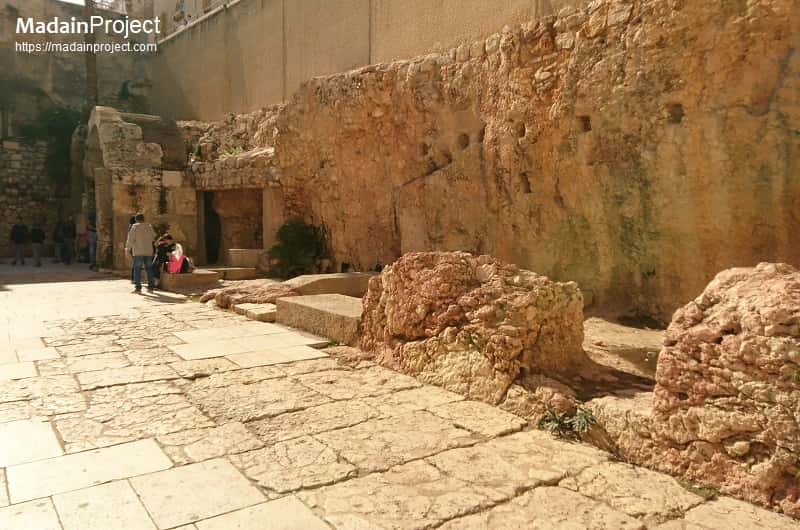 Remains of the Shops
The Byzantine street was open to the sky in the center, but was covered on both sides with terra cotta tiles supported by wood planks. Along its length, the roadway was divided into three parts: two colonnaded covered walks flanking a 12 meter wide road.

Stalls/Workshops
The wall of the Cardo's eastern portico featured an arcade that housed various stalls and workshops leased by craftsmen and merchants. The shaded porticoes provided separation of pedestrian traffic from wheeled carts, shelter from the elements, space for small-scale commerce, as well as opportunities for residents and visitors to gather and interact. 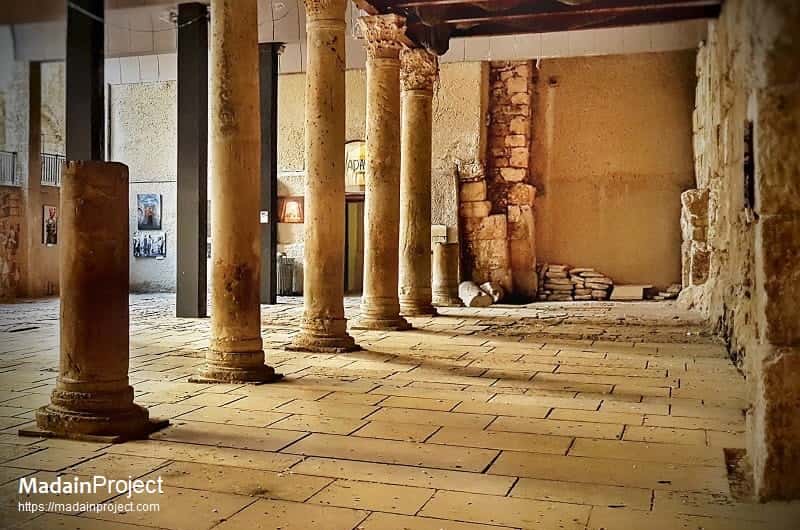 Pavement
The central open pavement provided commercial access as well as ritual space. Some of the excavated Cardo sections are located under the modern houses of the Jewish quarter. The following photo shows a reconstructed section, with the wooden roof planks. The pillars and some of the bricks are from the original Byzantine road.

Depiction on the Madaba Map
The part of Madaba map that depicts Jerusalem with the Cardo Maximus in the center as a colonnaded street. Two important structures along the cardo were Nea Church and Holy Sepulchre. The Cardo's most striking visual feature was its colonnade, clearly depicted on the Madaba Map.

Depiction in the Gallicantu Model of Jerusalem
A model of the Byzantine city displayed in Saint Peter Gallicantu shows how central was the Cardo Maximus. It is seen here from the side of Damascus gate on the north (bottom right), straight across the entire city towards the Nea (on the far left side) and the Holy Sepulcher (on the right side) in the middle of the road. Damascus Gate is the only Jerusalem gate to have preserved the same name since at least the 10th century (i.e. Bab al-Amud).

Modern Street called HaKardo along the ancient Roman-Byzantine Cardo Maximus, the ancient remains are to the right in lower levels. Artist's impression of how this road would have looked like in its hayday. 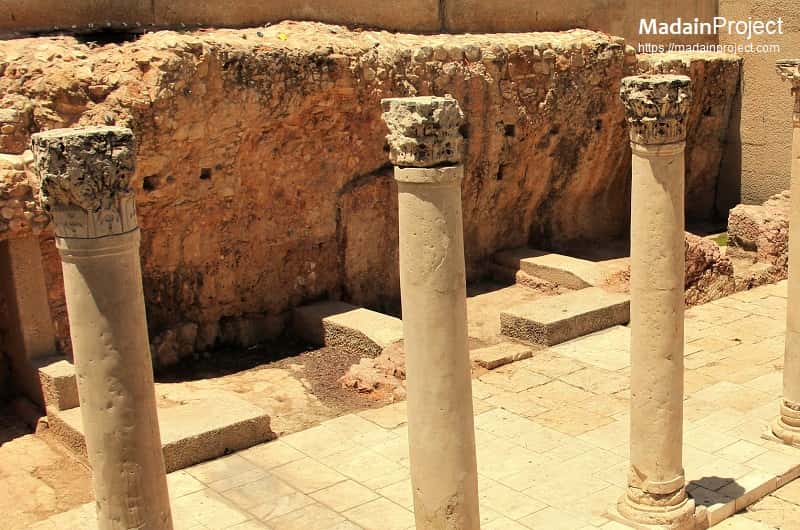 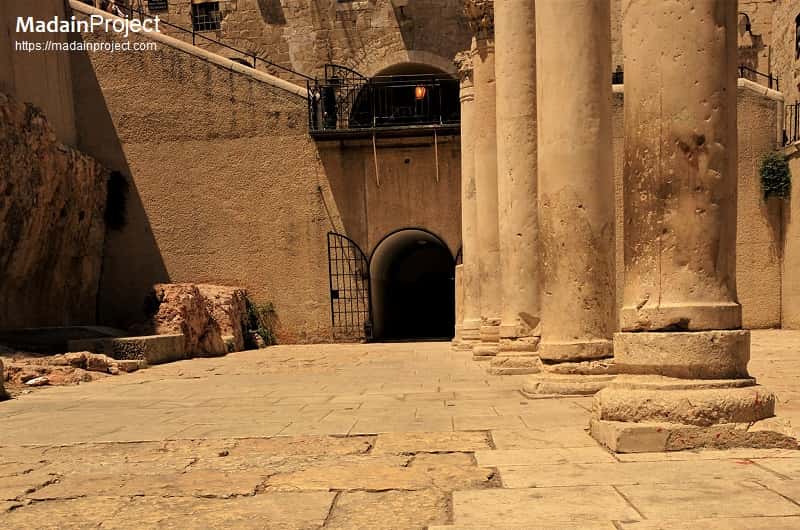 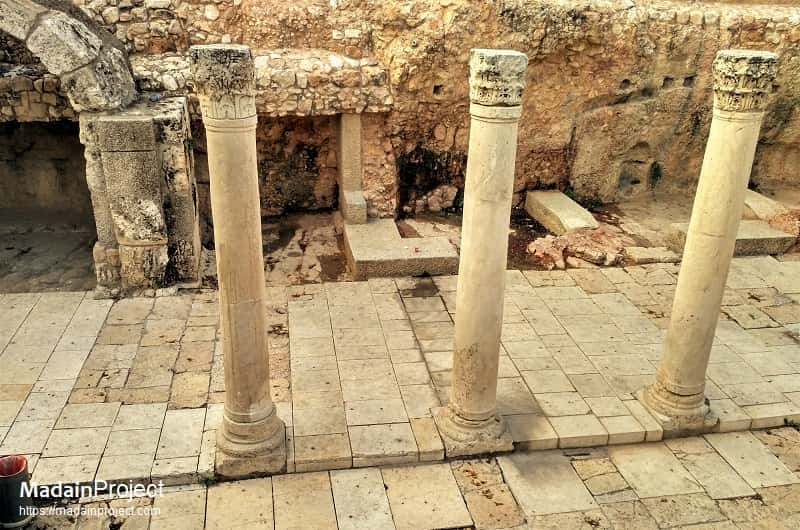 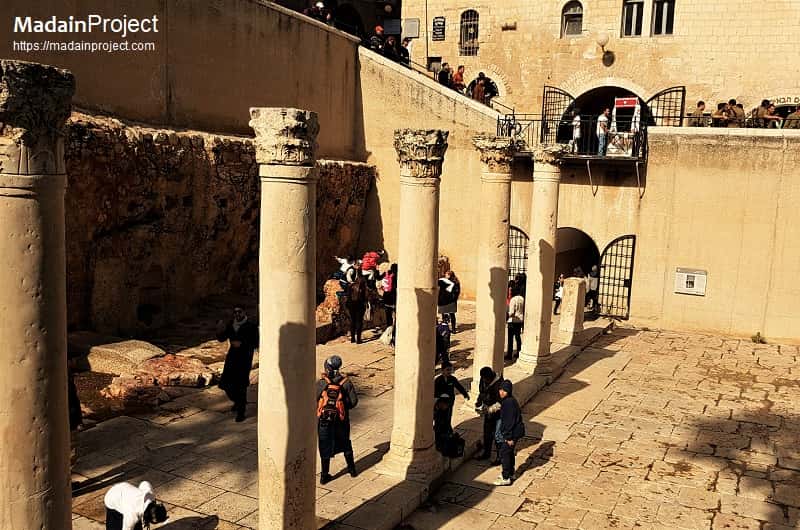 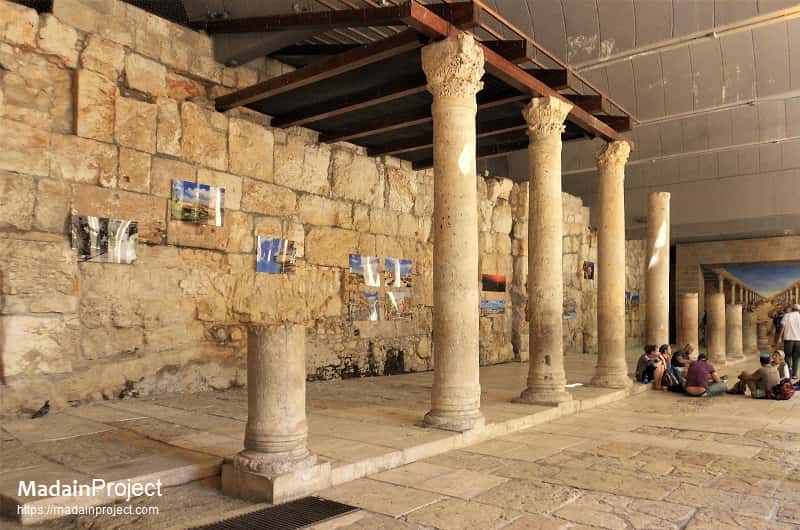