The burial chamber was the only decorated part of the tomb KV62, where the young boy king Tutankhamun was buried. It was decorated with scenes from the opening of the mouth ceremony (showing Ay, Tutankhamun's successor acting as the king's son) and Tutankhamun with a number of gods and goddesses.

Tutankhamun was buried in a tomb (KV62) that was unusually small considering his status. His death may have occurred unexpectedly, before the completion of a grander royal tomb, causing his mummy to be buried in a tomb intended for someone else. The entire chamber was occupied by four gilded wooden shrines which surrounded the king's sarcophagus. Currently the only item in the burial chamber of King Tutankhamun is his quartzite sarcophagus. The sarcophagus contains the golden coffin which in turn contained the mummy of the young pharoah, Tutankhamun.

Though the chamber looked as if it housed very little items, the burial chamber inside the tomb had the most important and glorious treasure ever found within Egypt— Tutankhamun’s mummy, his solid gold coffin, and his death mask. The little space that was left between the large blue and gold shrine and the tomb walls of the northern wall included boat ores and an Imiut Fetish (emblem of Anubis) positioned ever so neatly across. The burial chamber encompassed a more sophisticated view in that it was not filled with hundreds of items such as the annex room, the treasury room, or the antechamber. The elegance of this room was made obvious through the reliefs on the wall and the large golden shine that encased two more shrines and Tutankhamun’s sarcophagus. 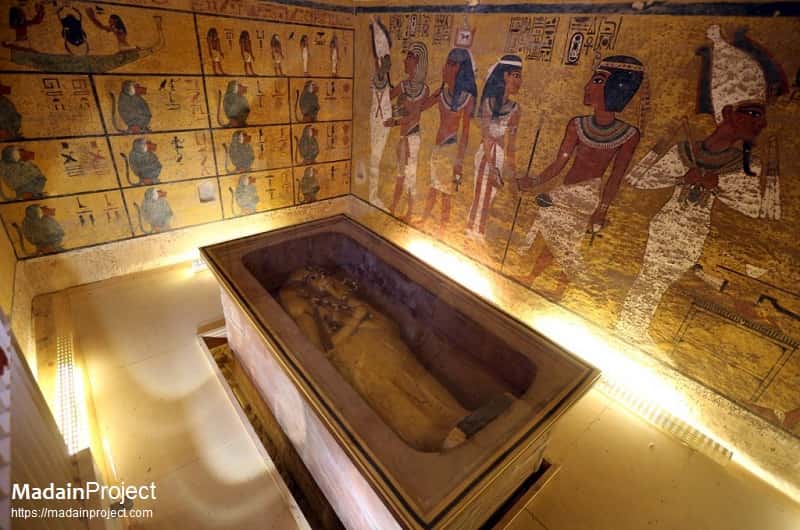 Northern Wall
North wall of the King Tut's burial chamber bears a three act narrative, arranged to be read from right to left (east to west). The first scene (right) presents the opening scene with a king – the figure on the right – conducting, as sem-priest (most likely Ay), the Opening of the Mouth ceremony for a mummiform figure (Tutankhamun) shown standing on the left. In the next scene and in the middle of the mural, Tutankhamun is seen as a young boy being greeted by the Goddess Nut. To the left side of the mural is Tutankhamun embracing Osiris. This scene shows the pharaoh perhaps being accepted into the afterlife. Behind him stands his Ka (his spiritual representation) embracing Tutankhamun.

Western Wall
The western wall of the burial chamber depicts the twelve hours of the King's journey through the Amduat (That Which Is In the Afterworld). Like many funerary texts, it was found written on the inside of the pharaoh's tomb for reference. It tells the story of Ra, the Egyptian sun god who travels through the underworld, from the time when the sun sets in the west and rises again in the east. It is said that the dead Pharaoh is taking this same journey, ultimately to become one with Ra and live forever.

Southern Wall
The representations of the king with various deities (Anubis, Isis, Hathor and others now destroyed) on the south wall. Though a great deal of the painting on this wall was damaged, the other half shows Tutankhamun surrounded by the God Anubis and the Goddess Hathor. In their hands they are holding Ankhs which symbolize Tutankhamun’s eternal life in the Afterworld. The southern wall of the burial chamber was unfortunately damaged as there was no door to easily access the room. From the antechamber, Howard Carter chiseled his way through damaging a portrait of the Goddess Isis that would have been on the opposite side of the wall.

Eastern Wall
The eastern wall on the tomb is much more dramatic. Upon this wall, the king is being carried to his tomb by mourners, high officials of Upper and Lower Egypt, and possibly Horemheb towards the rear procession. In this scene, Tutankhamun’s body is being slid across the ground upon a ship that has been anchored on a sled with a canopy used to shelter and protect his mummy.

The Mummy of Tutankhamun

The burial chamber was found in 1922, but was not opened until a year later. Two years passed between the discovery of the tomb and that of the mummy. At present, Tutankhamun's mummy is in its original resting place in the Valley of the Kings in the antechamber of KV62. The mummy is housed in the southern part of the antechamber in front of the entrance to the annex.