The Masjid Bay'ah (مسجد البيعة), literally the "Mosque of the Pledge", close to Mina, commemorates the spot where the Ansar of Madinah pledged their allegiance to the Prophet in the year 621 CE. The group included leaders of the Aws and Khazraj tribes of Madinah and were twelve in number. The second such pledge called the second Aqabah pledge (Bay’ah Aqaba Thaaniya) took place the following year, the thirteenth year after the Prophet Muhammad proclaimed his Prophethood.

Lexically, al-'Aqaba means mountain pass, a way to get to the top of a mountain. Because both of the pledges of allegiance to Prophet Muhammad were held at a mountain pass between Mecca and Mina, they are known as pledges of al-'Aqaba. It is located five kilometers far from Mecca.

The Masjid 'Aqba was built at the request of Caliph Abu Ja'far al-Mansur in 761/2 at the site of al-Bay'ah, i.e. the place where the Islamic Prophet Muhammad met with the Ansar (the supporters), and they took the pledge ('bay'ah', hence the name) of 'Aqaba.

First constructed less than 150 years after the death of prophet Muhammad, it is believed that the current structure retains the original archectural form and dimensions. Although, occassionaly locked, usually it is available for salah and nawafils for public. 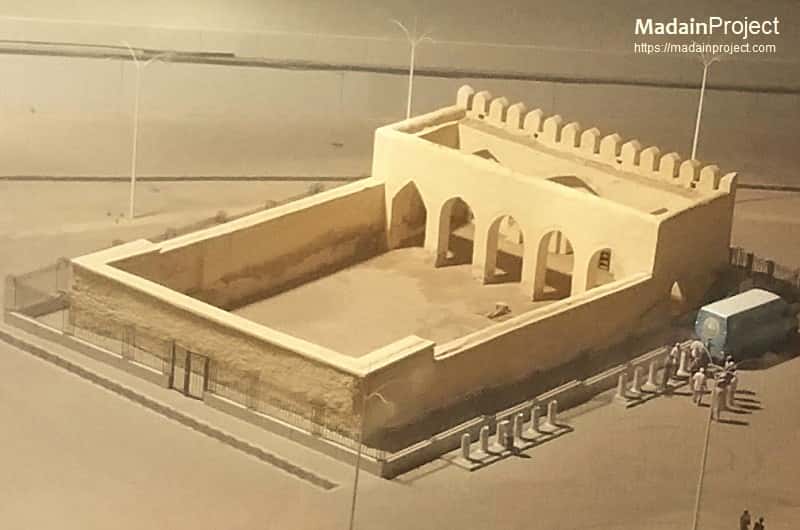 The compact Bayah Mosque is located close to Mina, just east of Makkah. As the Stoning of the Devil ritual in Mina is part of Hajj and Umrah, many pilgrims stop by this elegant house of worship. It has been renovated several times, but the mosque’s graceful architecture, open courtyard and humble dimensions have remained intact throughout the centuries and the current structure probably dates back to the Ottoman period.

Courtyard
The mosque has an open courtyard. It is located below the Wadi Mina, 300 meters from the jamrah al-'aqaba (see Stoning of the Devil), to the right of the bridge. The mosque is oriented east-west, and the qibla is set at angle towards south-west. The qibla wall is topped with parapet-style elements. These might have supported the wooden beams that constitud the roof of prayer hall or may have been merely decorative.

The courtyard in front of the prayer hall is an open air area, enclosed with walls on all three sides. The walls of Masjid Bayt 'Aqaba contain a number of niches, function of which is unknown. Some of these are square in shape and some have arched tops. A Mastaba like platform lies against the rear wall. It is possible that this area was covered as well and the niched in the walls either held copies of Quran or the oil lamps.

Inner Facade
The simple structure is free of any adornments and decorations, except a few engraved patterns (inspect) around the upper part of the central arcade, the mihrab and smaller niches flanking the mihrab. The central arcade is topped with five arches, three of these are semi-circular one is somewhat pointed and one (the sourthern most arch) is entirely triangular in shape. The size of all the arched portals is not uniform either. 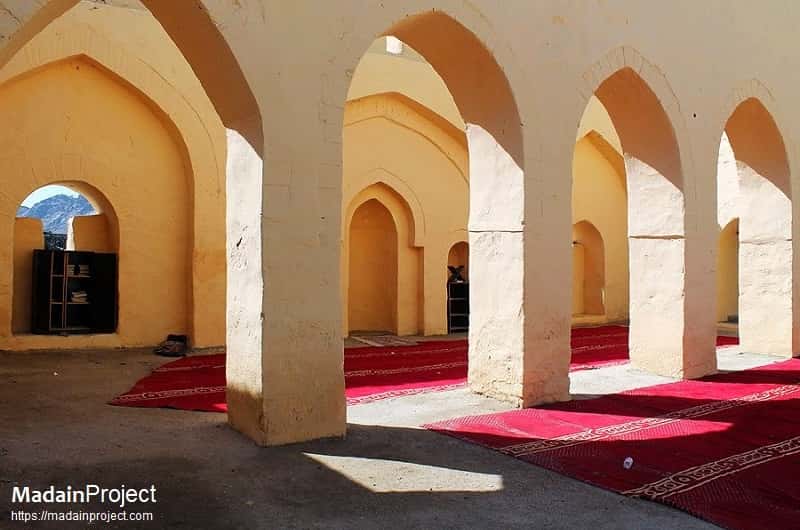 Prayer-hall
Simple in design, an arched entrance opens into an uncovered area where a row of arches close to the mihrab (imam's niche) gives way to a larger courtyard. Prayer rugs sit piled up for anyone wanting to pray here. The prayer hall, towards the qibla, originally was a roofed area, as it is evident from the archectural features near the top of the structure. Built out of wooden beams, date palms and dirt it has long disintigrated. Because the mosque is not in regular use, it has been maintained only as a historical point of interest. 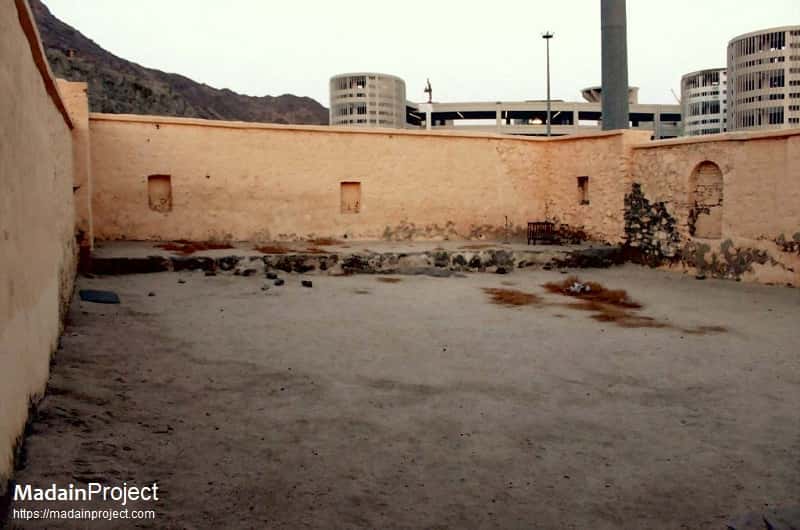 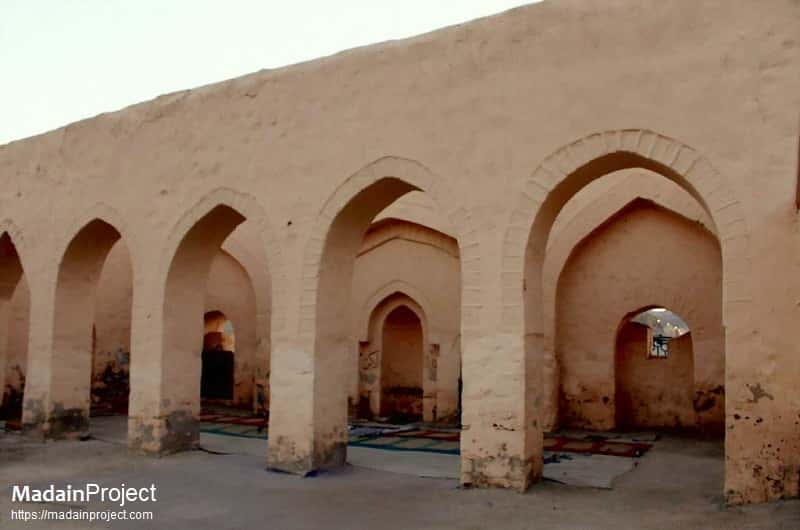 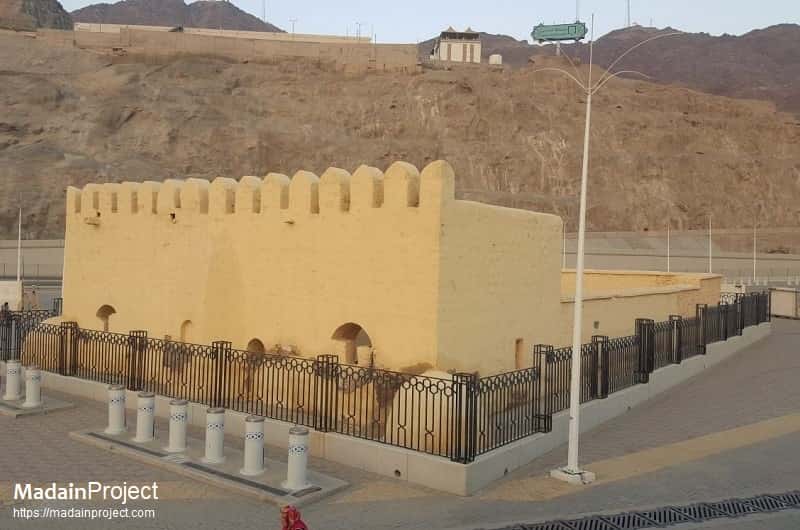 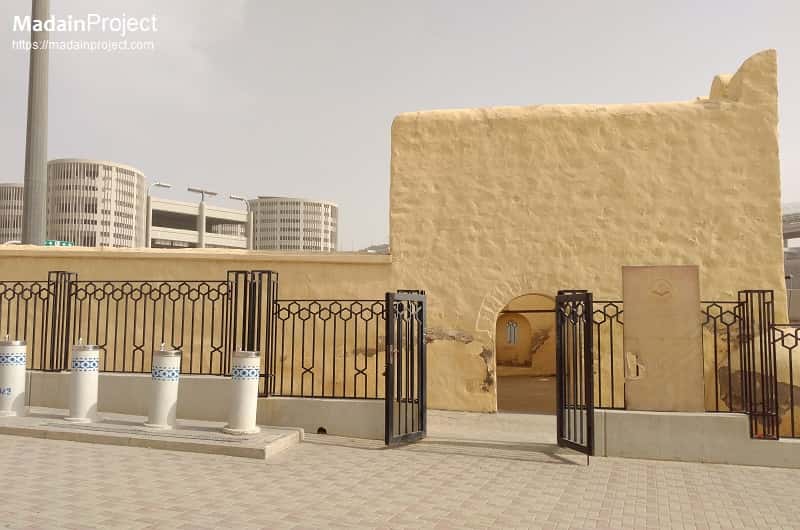 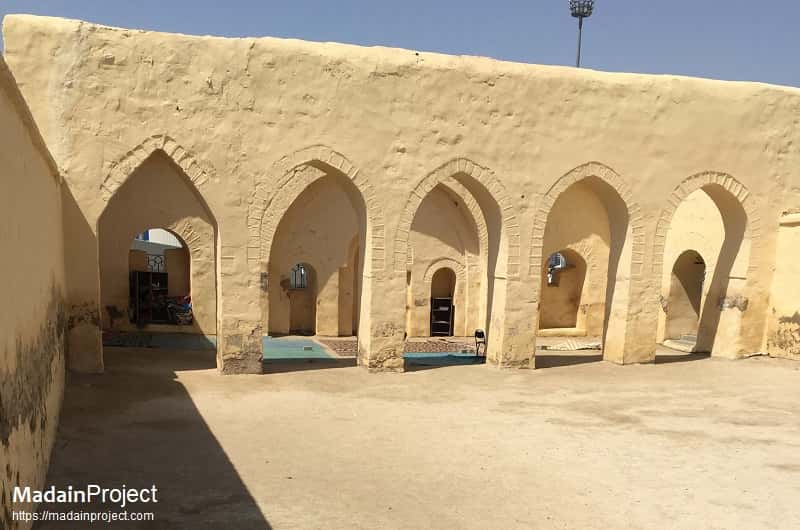