The Bab Bani Shaiba (باب بني شيبة), also spelled as Bab Banu Shaybah, literally meaning the gate of sons of Shaybah, was a historic entrance to the sacred precinct of Great Mosque of Mecca. It was named for the Banu Shayba tribe of Mecca. Bani Shayba are the key-bearers of Ka'ba. This free standing arch-gate no longer exists.

The Bab Bani Shaiba was one of the original entrances in to the Masjid al-Haram precinct, dating back to the lifetime of prophet Muhammad. According to Islamic tradition it is mustahab (literally meaning 'recommended' or 'prefered') for the pilgrims to enter the sacred precinct (Great Mosque of Mecca) through this gate following the sunnah of prophet Muhammad.

Prophet Muhammad, handed the keys to Bani Shaiba in the year of the conquest of Mecca, and said, "Take it, O Bani Talha, eternally up to the Day of Resurrection (Qiyama), and it will not be taken from you unless by an unjust, oppressive tyrant." The members of this key-bearer tribe of Shaybah still greet visitors into the Kaaba during the cleaning ceremony and clean the interior together with the visitors.

Construction
Historically the Bab Bani Shaybah was never part of any enclosure wall, it was always a free standing arch. Even when it was last demolished during the Saudi era to clear the Mataf area of commemorative structures, it was a free standing arch. It was almost always a semi-circular arch, standing on two square columns, located directly to the east of the Maqam Ibrahim. The total height of the arch reached some 8 meters at its highest point.

Calligraphic Inscriptions
On the outer side of the crown of the arch verse 46 from the Surah al-Hijr was inscribed, "enter in it with peace and security" (ادخلوها بسلام آمنين). On the inner (lower) side of the crown, verse 80 from the Surah al-Isra was inscribed, "My Lord, cause me to enter a secure entrance and to exit a secure exit and grant me from Yourself a supporting authority". 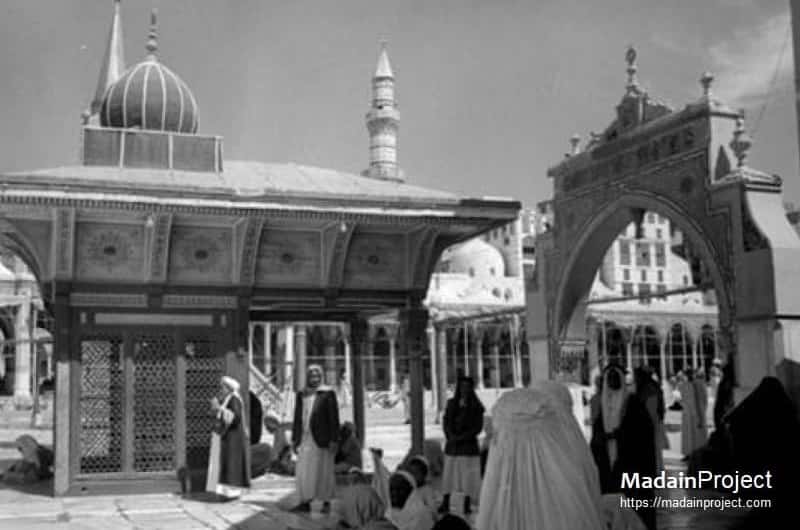 This free standing arch was demolished on October 22, 1967 (Rajab 18, 1387 Hj.) in order to free the Mataf area of above-ground structures and provide the pilgrims with more space for circumbulation. 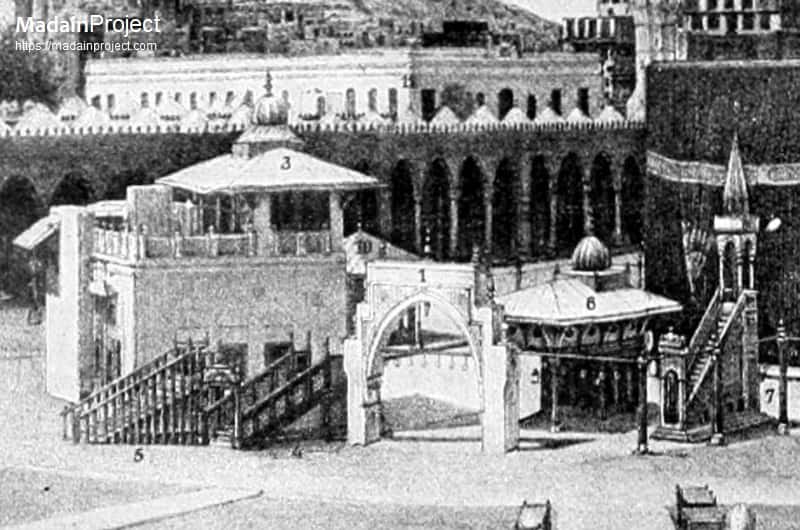