Bāb Saghīr Cemetery (مقبرة باب الصغير), also called "Goristan-e-Ghariban", is an ancient cemetery and street in Damascus, Syria, with tombs on either side of the road. It is located in the Dimashq neighborhood, southwest of Umayyad Mosque, adjacent to the Bab al-Saghir.

According to a tradition the heads of 16 martyrs of the Battle of Karbala were buried in Bab Al-Saghir. The cemetery also contains a number of cenotaphs (empty grave markers) created for the purpose of ziyārah (زِيَـارَة‎), with the actual graves being at Jannaṫul-Baqī' (جَـنَّـةُ الْـبَـقِـيـع‎), in Medinah, Saudi Arabia. Bab al-Saghir Cemetery is one of the oldest cemeteries in Damascus which traces back to the early years when Islam entered the area.

During the caliphate of the Ali ibn abi Talib, Damascus became a stronghold for the Umayyads, a powerful faction which had supported the previous caliph Uthman ibn Affan. After Ali’s death, the Umayyads seized control of the caliphate, establishing a new capital city at Damascus. Almost overnight, the Bab Al-Saghir became a preeminent place for prominent Muslims to be buried. It is uncertain exactly why so many relatives of Ali ibn abi Talib are buried here.

Ali’s control over Damascus was never strong during his own lifetime, and none of the subsequent Imams resided any closer to Syria than the city of Samarra in Iraq. Nevertheless, at least half a dozen members of Ali’s clan are buried in the Bab Al-Saghir, including his daughter Umm Kulthum. Perhaps even stranger that so many of Ali’s descendents are buried here is that the Umayyads, their bitter rivals, permitted it. Bab Al-Saghir was also used by the Ummayad dynasty, and Muawiyah, the first of the Ummayad caliphs and nominal successor to Ali, was interred here in 680 CE.

It also is where millions of ordinary Damascenes are buried, along with prominent ones like former President Shukri al-Quwatli and Syriann poet Nizar Qabbani. A typical grave headstone (foreground) in the cemetery is made of marble and mentions the names of twelve imams, starting with Imam Ali at the very top.

Badr al-Din al-Hassani mosque, is a nine-storey complex comprising of a mosque, a mausoleum, a religious education school, dormitory facilities, a dining hall, and administrative offices, designed around an open atrium through the centre of the building.

Grave of Bilal ibn Rabah in Bab al-Saghir in Damascus, Syria. Bilal died in 640, and was the first and most important early Muslim to be interred along the Bab Al-Saghir, although an alternative tradition places his tomb in the town of Rabahiyya in Jordan.

The Bab Al-Saghir Cemetery is situated near the Bab al-Saghir gate near the southwestern wall of the Old City of Damascus. The cemetery is an open site, and both Muslims and non-Muslims are permitted to visit and pay their respects.

The grave of Ibn Qayyin al-Jawziyya is located in the Bab al-Saghir cemetery, beside the grave of his father. He was among Ibn Taymiyya's most important pupils. Ibn Qayyim al-Jawziyyah's contributions to the Islamic library are extensive, and they particularly deal with the Qur'anic commentaries, and understanding and analysis of the prophetic traditions (Fiqh-us Sunnah, فقه ). 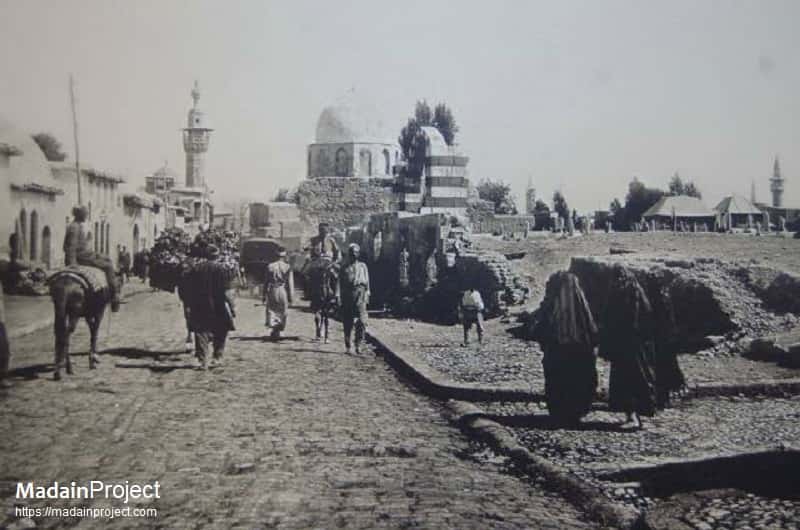