Robinson's Arch is the name given to the remains of Second Temple era monumental staircase carried by an unusually wide stone arch, which once stood at the southwestern corner of the Temple Mount. The arch is named after Biblical scholar Edward Robinson who identified its remnants in 1838.

It was built as part of the expansion of the Second Temple initiated by Herod the Great at the end of the 1st century BCE. Recent findings suggest that it may not have been completed until at least 20 years after his death. It carried traffic up from ancient Jerusalem's Lower Market area and over the Tyropoeon street to the Royal Stoa complex on the esplanade of the Mount. Upon completion the arch spanned 15 metres (49 ft) and had a width of 15.2 metres (50 ft).

3D reconstruction of the Robinson's Arch, the view from the upper platform panning right towards the Tyropoeon Valley, and then back to the left approaching the royal stoa of Herod.

Robinson's Arch as seen from the north-west looking south-east, it allowed access to the Temple Mount from the western Herodian Street. The arch was built as part of the Temple Mount's massive western retaining wall, which forms its eastern support. The voussoirs spring from a row of impost blocks which were cut to produce a dentil pattern. It was among the most massive stone arches of classical antiquity. 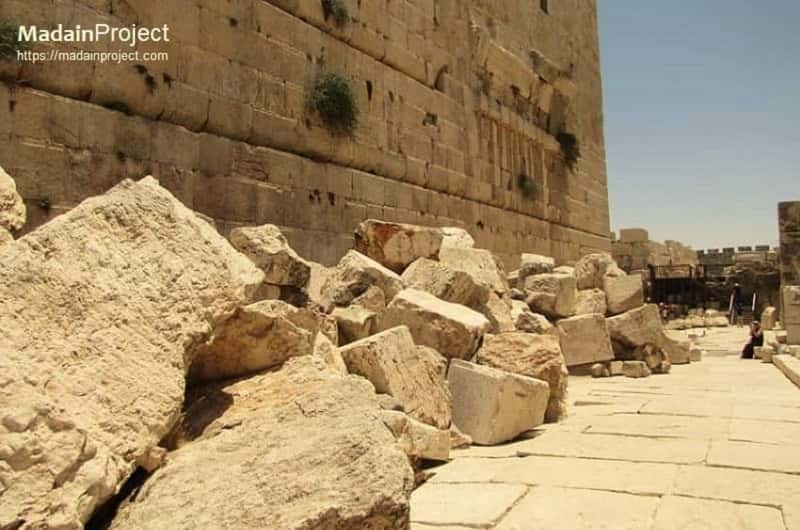 The springing of the Robinson's Arch as seen from the Herodian Street, along the western wall. The rubble from the Roman destruction lies on the Herodian pavement. The overpass was destroyed during the Great Jewish Revolt (66–73 CE), only a few decades after its completion. The destruction of Robinson's Arch occurred during the events surrounding the Roman sacking of Jerusalem in 70 CE. It has traditionally been blamed on the Roman legions which destroyed the Temple Mount enclosure and eventually set fire to the entire city. 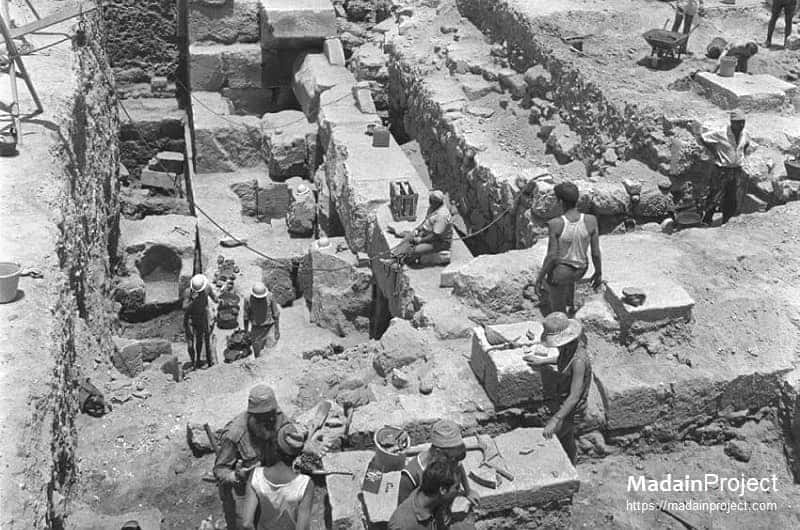 The foundations of one of the arches of an ancient bridge (Robinson's Arch) connecting the upper town of ancient Jerusalem with the Temple Mount. (Picture dated to 1 July 1969, 16:04:36) The arch is named after Biblical scholar Edward Robinson who identified its remnants in 1838 CE.

Robinson's Arch in 1880 CE, fragments of a gate once located at the top of the overpass have been recovered. From these, the gate's width has been calculated at 5 metres (16 ft). Josephus notes in his Antiquities of the Jews (15:410), that this was one of four gates along the western wall of the compound: "and the last led to the other city, where the road descended into the valley by a great number of steps".

The structures in the base of the great stair way, excavations during the second half of the 20th century revealed both its purpose and the extent of its associated structures. Herodian era bakery, the burnt structure in the middle of the picture was identified as a bakery due to the circular floor ovens were found there. The site abuts a major ancient intersection.

Modern view, showing the Western Wall on the left side of the picture and Robinson’s Arch on the right. Opposite (towards right, south of the Temple Mount) lay a large public square fronting the Temple's main Hulda Gates. Illustration depicting the proposed reconstruction of the Tyropoeon Bridge from nearly the same angle. The heavy public traffic to and from this edifice accounts for the width of the stepped street, which approximates that of a modern four-lane highway.