Abreha (أبرهة الأشرم), and Aksumite army general, sought to promote Christianity in the predominantly Jewish kingdom while also attempting to antagonize the Kaaba in Mecca, a major religious center for the adherents of Arab polytheism. Abreha therefore ordered the construction of the Al–Qalis Church (also known as al–Qulays and al–Qullays, from the Greek Ekklesia) in Sana'a.

Letters were sent to both Aksum and the Byzantine Empire, requesting marble, craftsmen and mosaics. The absence of mosaic making tradition in Pre-Islamic Arabia and Ethiopia at the time, along with the frequent use of mosaicists by the Byzantines to achieve diplomatic objectives corroborates that the Byzantines complied. Historian Procopius records that an envoy was dispatched to Abreha during the reign of emperor Justinian I, placing the construction of the church between 527 and the late 560's.

The church was constructed from green, yellow, white and black stone which was brought from an older castle located at Ma'rib. Leading to the church was a marble staircase, while the door was made of bronze or copper. The church combined three separate architectural elements known as bayt, iwan and qubbah. Iwan and qubbah, consisted of mosaic ornamentation of floral motives and gold star for the former, and polychrome mosaic crosses, silver and gold for the latter.

Taking into consideration a Byzantine edict issued in 427 prohibiting the placement of crosses to locations where they can be stepped upon, it is probable that the crosses were positioned on the walls. The rest of the decoration consisted of carved precious woods and ivory, combined with gold panels inset with precious stones and crosses. Chroniclers make no reference to figurative representations, a style commonly encountered in the aniconic Syrian and Palestinian mosaic traditions. 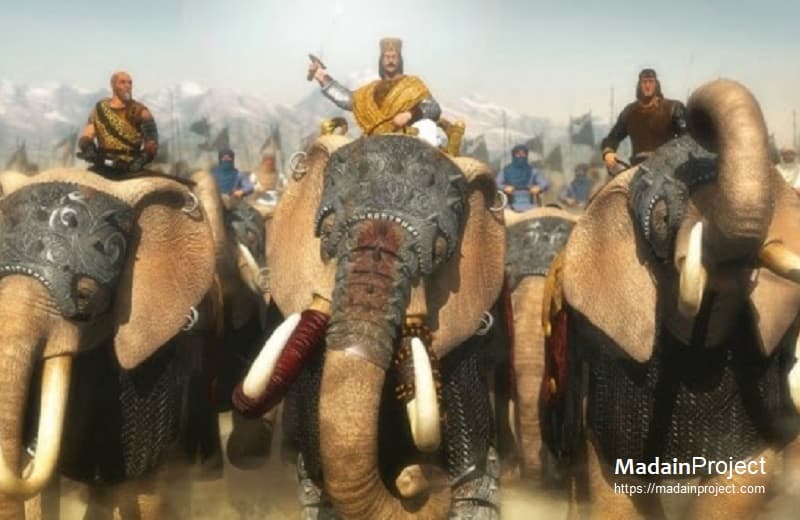 An imagined illustration of Abraha, marching towards Mecca for the destruction of Kaba. He was an Aksumite army general, then the viceroy of southern Arabia for the Kingdom of Aksum, and later declared himself an independent King of Himyar. Abraha ruled much of present-day Arabia and Yemen from at least 531–547 CE to 555–565 CE.

The influence of the church as a place of pilgrimage, may have been the reason behind the actions of Mecca's pagans who attempted to befoul the church. In 570, Abreha organized a punitive expedition in response to this incident. The church is said to have survived at least until the reign of the Abbasid caliph al-Mansur 714–775 CE.

The Old City of Sanaʽa (مَدِيْنَة صَنْعَاء ٱلْقَدِيْمَة), old fortified city, is where the al-Qalis Church was located, has been inhabited for more than 2,500 years and contains many intact architectural gems. The old city is surrounded by ancient clay walls which stand 9–14 metres (30–46 ft) high and contains several of the old skyscrappper-style houses.