al Khazneh (الخزنة) was originally built as a mausoleum and crypt at the beginning of the 1st century CE during the reign of Aretas IV Philopatris. Its Arabic name Treasury derives from one legend that bandits or pirates hid their loot in a stone urn high on the second level. According to Areta another legend is that it functioned as a treasury of the Egyptian Pharaoh at the time of Moses (Khaznet Far'oun).

As with most of the other buildings in this ancient town, including the Monastery (Arabic: Ad Deir), this structure was carved out of a sandstone rock face. The structure is believed to have been the mausoleum of the Nabatean King Aretas IV in the 1st century CE. It became to be known as "Al-Khazneh", or The Treasury, in the early 19th century by the area's Bedouins as they had believed it contained treasures.

The Treasury’s façade (24.9 meters wide x 38.77 meters high) most clearly embodies the Hellenistic style and reflects the influence of Alexandria, the greatest city in the Eastern Mediterranean at this time. There are no inscriptions or ceramic evidence associated with the tomb that allows us to directly date it. Relief sculpture and acroteria (detail), the sculptural decoration also underscores a connection to the Hellenistic world.

Upper Facade
On the upper level, Amazons (bare-breasted) and Victories stand, flanking a central female figure (on the tholos), who is probably Isis-Tyche, a combination of the Egyptian Goddess, Isis, and Tyche, the Greek Goddess of good fortune. Many of the building's architectural details have eroded away during the two thousand years since it was carved and sculpted from the cliff.

Lower Facade and Entrance Porch
The entrance is flanked by statues of the twins Castor and Pollux who lived partly on Olympus and partly in the underworld. The massive stone lintel spans the width of the building and bears the weight and sits on top of six columns carved out of the same cliff. While the outer four are left embedded in the rock face the central two columns are freestanding. The al-Khazneh was heavily restored in 1960s, before this one of the central column was missing. The lintel and the entire facade is fully supported by the great cliff in which it sits.

Forward Antechambers
The porch is flanked by two antechambers. The facades of the two side chambers are nearly identical (peek inside). 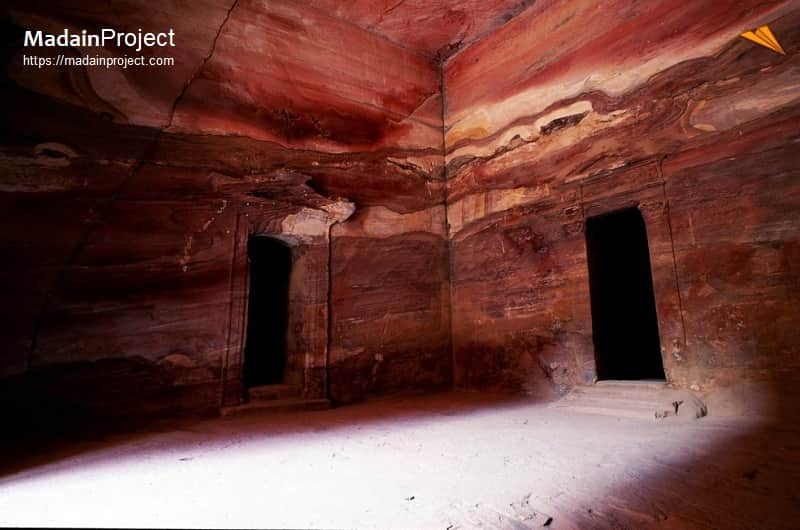 Central Chamber
The central chamber has three interior portals that lead to the antechambers as seen in the floor plan below. The interior of the great monument has decorations, only the beautiful features of the natural sand stone. Despite its simplicity the interior of the al-Khazneh required careful and well-thoughout planning.

The burial crypt beneath the Treasury. Although the purpose of the Treasury is unclear: some archaeologists believed it to be a temple, while others thought it was a place to store documents. However, the most recent excavation here has unearthed a graveyard beneath the Treasury. The excavations by Farajat revealed that al-Khazneh did lay at the heart of a thriving religious complex. The fact that archaeologists have found bowls with incense and gifts to the gods suggests that it was a place of worship.