In the center of the Rotunda is the chapel called the Aedicule, which contains the Holy Sepulchre itself. The Aedicule has two rooms, the first holding the Angel's Stone, which is believed to be a fragment of the large stone that sealed the tomb; the second is the tomb itself.

The Edicule of the Tomb, has the layout of a tomb from the time of Jesus, formed by a passageway. It was rebuilt in 1808 CE after a fire. Covered by a flat roof with a small Russian-style dome at its center whose “onion” is supported by narrow columns. 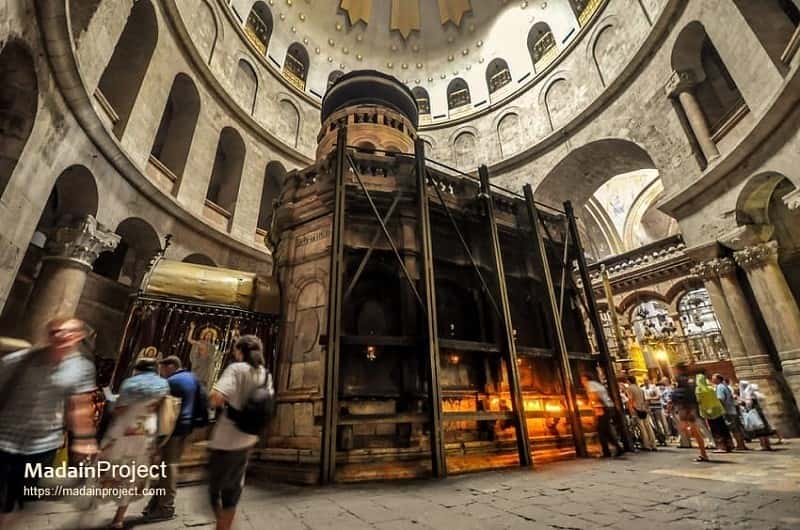 Rotunda
The Rotunda and the dome located in the centre of the Anastasis were only erected around the chapel circa 380 CE. The most important element of the complex is the rotunda which contains the sepulcher itself. The sepulcher stands in an elaborate structure within the rotunda, surrounded by columns supporting an ornamented, domed roof. The sepulcher itself is surrounded by a circle of twelve columns - groups of three columns between four pairs of square piers.

Facade
The richly decorated facade of the Aedicule. Under the Status Quo, the Eastern Orthodox, Roman Catholic, and Armenian Apostolic Churches all have rights to the interior of the tomb, and all three communities celebrate the Divine Liturgy or Holy Mass there daily. It is also used for other ceremonies on special occasions, such as the Holy Saturday ceremony of the Holy Fire led by the Greek Orthodox Patriarch (with the participation of the Coptic and Armenian patriarchs).

Side Walls
The side panels are decorated with inscriptions in Greek praising Jesus. To its rear (left), in a chapel constructed of iron latticework, lies the altar used by the Coptic Orthodox. Historically, the Georgians also retained the key to the Aedicule.

Burial Chamber
The second chamber (peek inside) as seen from the entrance which contains the tomb itself. Possibly due to the fact that pilgrims laid their hands on the tomb or to prevent eager pilgrims from removing bits of the original rock as souvenirs, a marble plaque was placed in the fourteenth century on the tomb to prevent further damage to the tomb.

Towards the rear of the Aedicule, inside a small chapel constructed of iron latticework, lies the altar used by the Coptic Orthodox. The natural rock, which is covered with marble slab inside the burial chamber is visible in this section. The small Coptic chapel is located on the west side of the "edicule" with a separate entrance to the chapel.

During the recent opening for restoration from May 2016 to March 2017 of the tomb a conservator cleans the surface of the stone slab venerated as the final resting place of Jesus Christ inside the second chamber of the Aedicule. The Aedicule underwent restoration and repairs after the Israel Antiquities Authority declared the structure unsafe. Much of the $3 million project was funded by the World Monuments Fund. 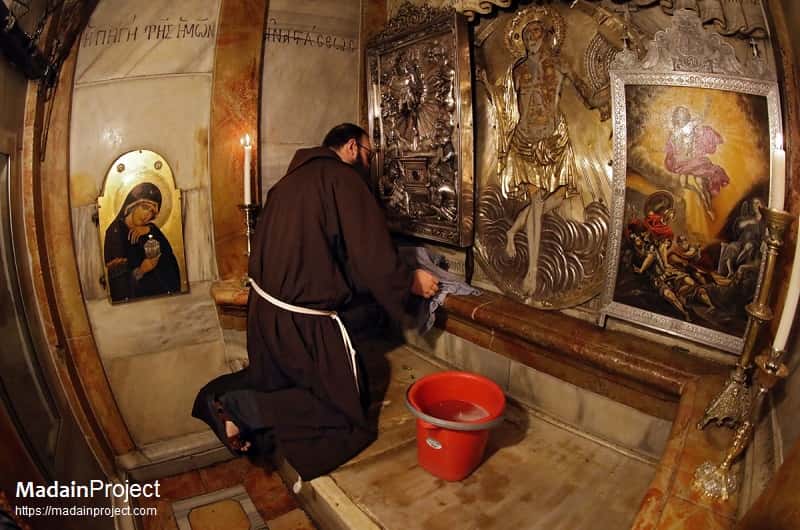